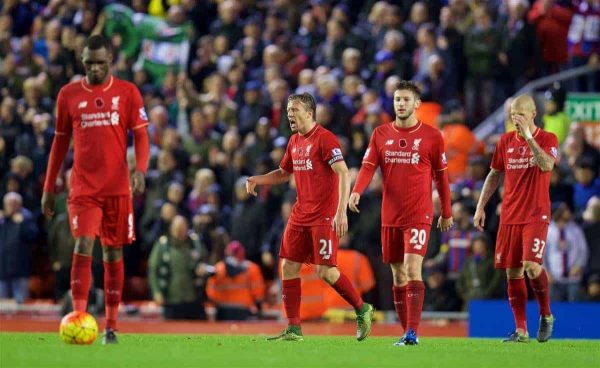 The dust has settled after Liverpool’s 2-1 home loss to Crystal Palace on Sunday, and we bring you the best newspaper reaction from the game.

It was a bitterly disappointing 90 minutes at Anfield, as soft goals once again proved to be the Reds’ undoing against Alan Pardew’s side.

It was a game that once again raised question marks about the quality within Liverpool’s squad, and highlighted what a big job Jurgen Klopp has on his hands.

Sunday’s defeat was the German’s first loss in the Anfield hot-seat, and attention now turns to the trip to Man City after the international break.

Here is how the morning papers reacted to the match.

The Guardian‘s Andy Hunter felt the Reds looked jaded, as their bogey side Palace again left Merseyside with all three points.

“You must be sick of us,” the Crystal Palace fans sang, and Liverpool could only concur. Alan Pardew’s team inflicted the first defeat of the Jurgen Klopp era with their third consecutive Premier League victory over the men from Anfield. One month into the job and Klopp is au fait with Liverpool’s problem club.

Goals from the excellent Yannick Bolasie and Scott Dann, a former Anfield season-ticket holder, gave Palace their latest Merseyside triumph. Pardew has now been involved in all three of Palace’s league wins at Anfield, as a player in 1991 and twice as a manager in 2015, and Liverpool again struggled against his enterprising tactics. Klopp was dismayed by both the outcome and the number of early leavers after Dann scored in the 82nd minute.

Liverpool looked like a team that had made a 5,000-mile round trip to Kazan in midweek.

Andy Kelly of the Liverpool Echo was impressed by the performance of Jordon Ibe:

Jordon Ibe may not be reaching celestial or even extraordinary heights yet but he’s certainly a man transformed.

His first Liverpool goal in Kazan in midweek showed he had already taken a step forward and he was the first of the Reds to raise themselves from their Europa slumber.

Occupying the right side of the three behind Benteke, he took every opportunity to turn and run at Palace defenders in his first Premier League start since August.

Even when he failed – and he tired second half with his decision-making far from perfect, especially that back heel near his own box- there was warm applause from Klopp, his efforts regularly attracting two defenders.

The message to the 19-year-old from the German is clear. You’ve got the talent, now use it. A little bit of confidence is helping him do just that.

Chris Bascombe of the Telegraph was another who felt Ibe was one of the bigges positives to take from the game:

When Liverpool sold Sterling to Manchester City, the response from supporters was Jordon Ibe was a player of greater potential. Those words sounded hollow after the first few games of this season, particular as Ibe’s promise went into hibernation. He’d lost the capacity and will to beat a man, a peripheral figure in games.

The transformation in the last two matches has been thrilling as he was as influential as anyone in bringing his side into the game after a poor start, although he tired badly in the second half. He’s not worth £49 million yet, but Ibe looks at home at Anfield again. That could save Klopp a fortune.

James Pearce of the Echo bemoaned the Reds’ lack of ruthlessness in either third:

This was a game Liverpool should never have lost. But they ultimately paid the price for familiar failings at both ends of the field.

Boyhood Reds fan Scott Dann wheeled away in delight after becoming the latest to benefit from their vulnerability when it comes to defending set-pieces.

Yannick Bolasie had punished some equally shoddy defending earlier with those goals sandwiched by Philippe Coutinho‘s equaliser just before the interval.

Once back on level terms, Liverpool dominated for long periods but weren’t able to make it count as chances went begging.

With expectation levels rocketing with every recent step forward under Klopp, this was a reality check for the Reds going into the international break.

Mignolet- Poor distribution earned him the ire of the home crowd on several occasions. His kicking was poor early on and when he failed to release Jordon Ibe for a quick counterattack the Kop were so angry Klopp took it upon himself to gesture to them to calm down. Should have done better with the Palace winner.

Can- Costly mistake led to the Palace opener and he gave the ball away cheaply far too often. To his credit he kept showing for the ball and tried to drive the team forward, but it was no surprise that he was the first player to make way when Klopp looked to get some fresh legs on the pitch.

Benteke- Failed to take several presentable opportunities that came his way and some of his off the ball running when the team are counterattacking leaves a lot to be desired. His general link-up play was fine and at least he was in position to miss the chances. Interestingly, his better performances of late have come from the bench rather than when he’s started.