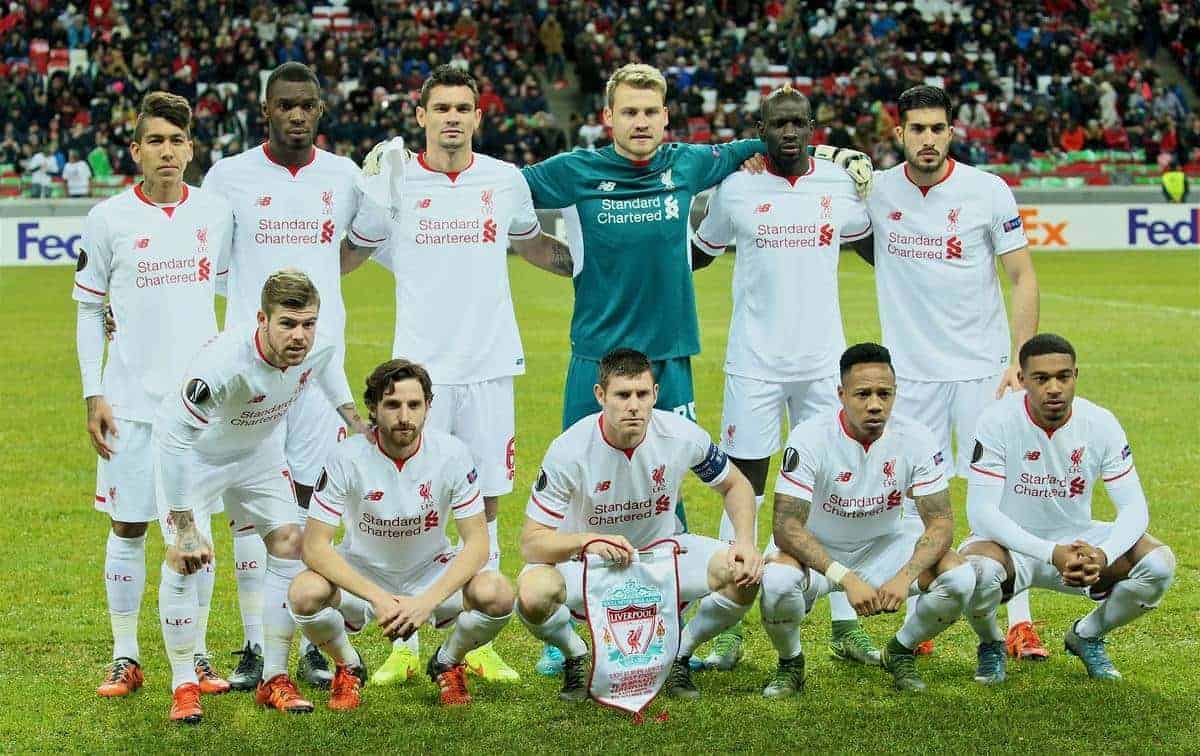 There were some solid individual performances as Liverpool beat Rubin Kazan 1-0 on Thursday. Here is how we rated each Reds player on the night.

The Belgian had almost nothing to do all evening, in a game that Liverpool dominated from start to finish.

He didn’t do a thing wrong, but then it was almost impossible not to.

Another fine showing from the right-back.

Clyne’s use of the ball was good all evening, and he also got forward well a number of times. One lightning-fast burst in the second-half showed just how quick the 24-year-old is.

The under-fire Croatian produced a solid enough showing, in what was one of his best performances in a Liverpool shirt for a while.

Aerially he was dominant, he showed quality in possession and his reading of the game was always spot on. Has to be said that he and Sakho didn’t have much to do though. When was the last time Sakho wasn’t one of Liverpool’s top two or three performers? Certainly not under Klopp.

The 25-year-old was again outstanding throughout, making some crucial interceptions and blocks, showing class on the ball and playing with great leadership. What a centre-back the Frenchman is.

Moreno was more solid than spectacular, but it was a decent outing from the Spaniard.

He added an attacking thrust down the left time and time again, firing into the side-netting after the break, but he was also dependable defensively. The ex-Sevilla man continues to do well under Klopp.

Can appears to be growing in stature the more games he starts in midfield, and he was once again a strong figure in the middle of the park.

Physically he was dominant, but he also showed some lovely touches in tight spaces. The youngster did sometimes overplay a little, however, and wasn’t always aware defensively.

This was a very Allen performance really: neat and tidy, but ultimately not quite having enough influence.

One nice run in the second-half almost saw him steal in following a one-two, and his work-rate and industry were decent throughout. More effective than some will give him credit for.

The England international really does feel like Liverpool’s weak-link at the moment, and this was another poor showing from him.

His touch deserted him time and time again, while his final ball constantly flattered to deceive. His effort cannot be questioned, but that’s not good enough to justify playing week in, week out. May have picked up a knock which could mean him missing out on Sunday, he perhaps would benefit from the rest.

A brilliant performance from the teenager, who proved to be the match-winner on the night.

Ibe took his first ever Reds goal expertly, stroking an effort in off the post following a surging run, but his general pace, power and creativity all stood out too. He looks to have found confidence under Klopp, playing in his natural position.

After a slow start to life on Merseyside, mainly due to injury and being played out of position by Rodgers, Firmino really is starting to look like a class act.

He was a creative spark throughout against Kazan, and it was his delightful round-the-corner pass that found Ibe for the Reds’ goal. The Brazilian was effortlessly classy, although his shooting needs to be improved.

Not exactly an earth-shattering display from the 24-year-old, but there was still plenty of good.

His hold-up play and ability to link with teammates caught the eye, but his movement can be worked on.

Looked lively when he came, but didn’t achieve too much of note.

No time to make an impact, but dependable. It’s six games unbeaten for Klopp since taking charge of Liverpool, and he once again got his team selection spot on.

The 48-year-old showed trust in both Lovren and Ibe, with both excelling, and defensively the team looked assured once again.

Whether key men will be fatigued against Crystal Palace on Sunday remains to be seen, but Klopp was faultless on a potentially tricky night in Russia.