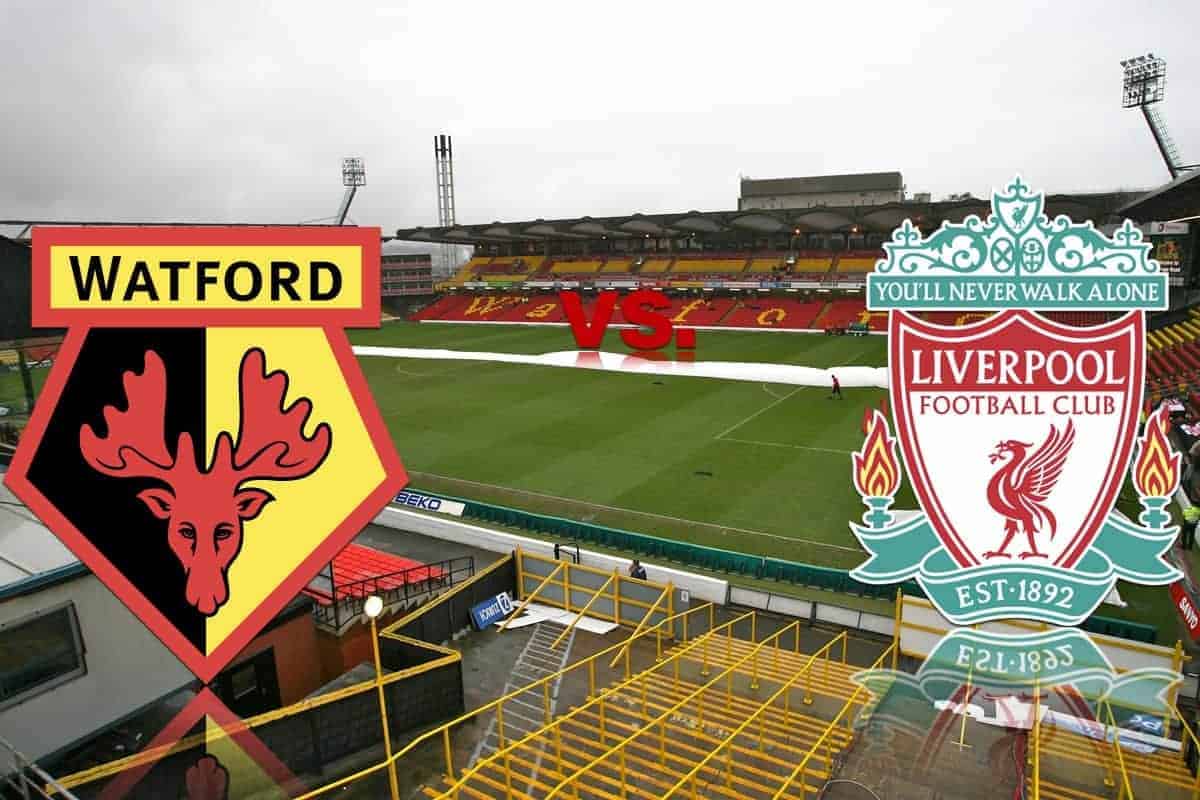 Liverpool head to Vicarage Road to take on in-form Watford on Sunday afternoon as the Reds look to end their three game winless run. Jurgen Klopp’s side begin the hectic festive schedule with the first of six games in 19 days against Quique Sanchez Flores’ high-flying Hornets.

A testing period looms for Liverpool, who need to return to winning ways in Hertfordshire to start rebuilding the positive momentum developed prior to the energy-sapping defeat against Newcastle.

It promises to be a tough game against Watford, who have surprised almost everyone with their outstanding form so far this season, and Klopp’s men will need to improve at both ends of the pitch to return to Merseyside with three points to move closer to fourth place. The two sides meet for the 25th time this weekend at Vicarage Road, where Liverpool have a good record.

The Reds have lost only three of 13 visits to Hertfordshire, drawing twice and winning eight times, including all of the last five fixtures. Craig Bellamy’s cool finish and a brace from Peter Crouch was enough to secure maximum points for Rafael Benitez’s side on that occasion against the Hornets who, in stark contrast to now, had won only one of their 21 league matches.

Liverpool last tasted defeat at Vicarage Road in 1986 – Kenny Dalglish’s men going down 2-0 – and Klopp will be keen to ensure defeat is avoided for another year.

Watford have enjoyed a fantastic campaign so far in their first top-flight season under the Pozzo family regime.

Sanchez Flores’ side come into the fixture in excellent form having picked up three straight wins of real importance against Aston Villa, Norwich, and Sunderland, to make it five wins from their last seven games.

The Hornets have amassed an impressive 25 points from 16 matches and sit seventh in the table, a point ahead of Liverpool.

In contrast, Klopp’s men arrive winless in their last three games with only one point to show from their last two league fixtures.

The Reds have been better on the road than at Anfield under Klopp however, and seek to add to their solid away form on Sunday.

Only Old Trafford has seen fewer goals this season than Vicarage Road, where Watford have scored just six times and conceded the same amount, suggesting Sunday’s clash will be a tight affair.

A return to winning ways for Klopp’s men in Hertfordshire is priced at 10/11, with a draw available at 5/2 and a fourth straight victory for the in-form Hornets at 3/1. Sanchez Flores has a healthy squad at his disposal for the Reds’ visit.

Only long-term absentees Rene Gilmartin, Joel Ekstrand and Tommie Hoban are missing, and the Spanish coach could welcome back Sebastian Prodl and Valon Behrami with the pair fit again.

Sanchez Flores could name an unchanged side from the XI that secured a third straight win at Sunderland last weekend.

That would see Captain Troy Deeney and top scorer Odeon Ighalo – two of only three Hornets to have found the net this season, and scorers of 15 of Watford’s 18 goals – lead the line once again.

Midfielder and Borussia Dortmund fan Almen Abdi – the only other scorer in the group – will be hopeful of keeping his shirt in the starting XI, after revealing his excitement at coming up against Klopp.

With Sanchez Flores likely to stick to his compact 4-4-2, width from full-backs and plenty of movement in the final third could prove key for Klopp’s side who will also have to stay tight to keep the dangerous strike duo under wraps.

Ahead of the trip to Vicarage Road, Klopp said:

“It’s not a big surprise [Watford’s success]. They have good players and a good plan.

“Watford are playing very well and have good strikers, quick in their minds. But we don’t go there to clap our hands for them.”

“Liverpool are one of the most important teams in England so it is amazing for the manager, the players and the fans to play against them in what will be an amazing atmosphere.

“He [Klopp] transmits a very positive atmosphere for the players and the fans of Liverpool.

“He looks like a very fun coach and I think the work he has done has been very good for Liverpool and football in general.”

The clash will be shown live on Sky Sports 1 in the UK and beIN Sports, Canal+, NBC Sports and Fox Sports around the world, with the game being the earlier 1:30pm kick-off time.