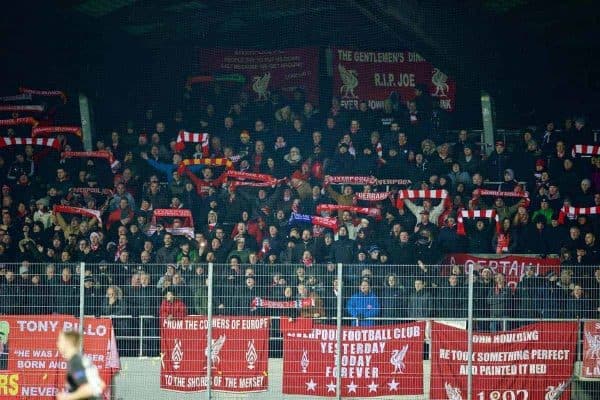 “No shots of note, no attacks of purpose” – How the papers reacted to Sion 0-0 Liverpool

It’s the morning after Liverpool’s drab goalless draw away to Sion, so we round-up the best newspaper reaction from the Europa League showdown.

This will not be a match that is remotely remembered in years to come, but the Reds did at least top their group after the draw in Switzerland.

On a freezing cold night, and a dreadful, half-frozen pitch, there was a real lack of quality from both sides from start to finish.

Jordan Henderson and Philippe Coutinho both stepped up their fitness levels, however, while Brad Smith impressed on his full Liverpool debut.

Attention now turns to Sunday’s Premier League game against West Brom at Anfield, with a win absolutely vital for Jurgen Klopp‘s side.

Here is how the morning newspapers reacted to the bore draw with Sion:

Dominic King of the Daily Mail failed to hide his disappointment at the quality of the game:

Flares were let off, Status Quo and The Beatles blared out of the speakers and the team in red celebrated en masse in the centre circle.

If ever a scene was out of kilter with the action that had gone before it, this was it: while FC Sion may have been delighted with a 0-0 draw against Liverpool, Jurgen Klopp’s noticeably muted reaction was far more in keeping with the events of the night.

A point was enough for Liverpool to win Group B and see Sion progress with them to the Europa League’s last 32 but there was no hint of satisfaction for Klopp or his players. This, simply, was a fixture fulfilled and a game they will want to quickly scrub from their memories.

There were no shots of note, no attacks of purpose and the only entertainment came when the final whistle sounded. Liverpool are safely through to the draw on Monday but, to go as far as Klopp wants them to, there can no repeats of nights such as this.

The Telegraph‘s Chris Bascombe highlighted the fact that Liverpool once again failed to break down a team who stuck 10 men behind the ball:

Liverpool can be satisfied with their progress, knowing how much improvement is required when the competition resumes.

Klopp was seeking an immediate response to the timid loss at Newcastle – that strangely characterless performance which lacked the energy he considers compulsory – but Sion were set up to cause similar issues.

We know Liverpool can play juggernaut football against teams daft enough to attack them, but they need to solve the problem of facing those who believe lack ambition on their own ground is the route to success.

Sion turned up at their home to stifle and succeeded in comfort. This is the new dawn for Liverpool under Klopp, sides now setting up on their own territory as they would at Anfield. It will be the same when West Brom visit Merseyside this weekend so you could consider this a practice session.

The Mirror‘s Alex Richards feels Brad Smith’s has a real chance to become Liverpool’s second-choice left-back, following a remarkable turnaround for the youngster:

For all intents and purposes, Australian Brad Smith’s Reds career looked over three weeks ago.

His contract expired in the summer, but the 21-year-old had rejected the club’s offer of a new one. Liverpool held onto his registration however and a trial at Barnsley came to nothing – no one else came near with the Reds happy to go to a tribunal over a potential transfer fee.

Last month, the player’s representatives informed Liverpool that he wanted to stay, on the terms offered and he penned a long-term deal. Since then, he has been training with the first team at Melwood. His attitude has impressed Klopp and last week he came off the bench to tee up Origi for his hattrick in the League Cup.

The trip to Switzerland represented his chance to show that he can rival Spaniard Moreno for the left-back slot. With Joe Gomez out for the season, Jon Flanagan still not ready for a comeback and Jose Enrique persona non grata, the opportunity is there for Smith to show his worth.

The same could not be said of Roberto Firmino‘s display, however, as the Liverpool Echo‘s James Pearce eluded to:

As the temperature continued to plummet so did Liverpool’s standards.

If Roberto Firmino‘s eye-catching display in the rout of Manchester City represented the first return on Liverpool’s hefty £29million investment, they’ve been left feeling short-changed by the Brazilian since.

Rather than push on, the former Hoffenheim attacker has retreated into his shell.

Firmino was anonymous once again. There were more half-hearted challenges and his movement was sluggish. Each time Klopp made a change he looked sheepishly across to the bench. He was finally hooked in the closing stages.

It's not been a great performance from Firmino but I remain convinced he will be world class for us. Needs time & sharpness. #LFC.

Firmino been worryingly anonymous. Not got on the ball in any areas to do damage; looked at Klopp then as if he was expected to be subbed

No player was given a worse mark than Firmino in Steven Kelly‘s ESPN player ratings, although centre-back pairing Kolo Toure and Dejan Lovren did impress:

Toure – Solid and dependable as usual, though Sion rarely put him under too much pressure. Was turned easily just the once, in the middle of the first half, but generally kept alert in a second half, when it would have been quite easy to take his eye off the ball.

Lovren – Also dependable, as the Croatian continued his revival of sorts. A couple of poor moments in the first half in which Emre Can and then Smith came to his rescue, but after that, nothing fazed him. Though Mamadou Sakho is a crowd favourite, Lovren has done enough to suggest he will not be easily shifted from this team.

Firmino – His form must now be worrying the manager. A good early through ball to Smith showed promise, but his night swiftly deteriorated. Though it was a generally average performance by Liverpool throughout, this was the Brazilian’s fourth poor display in a row and the kind of run that can sow seeds of doubt in a player’s mind.