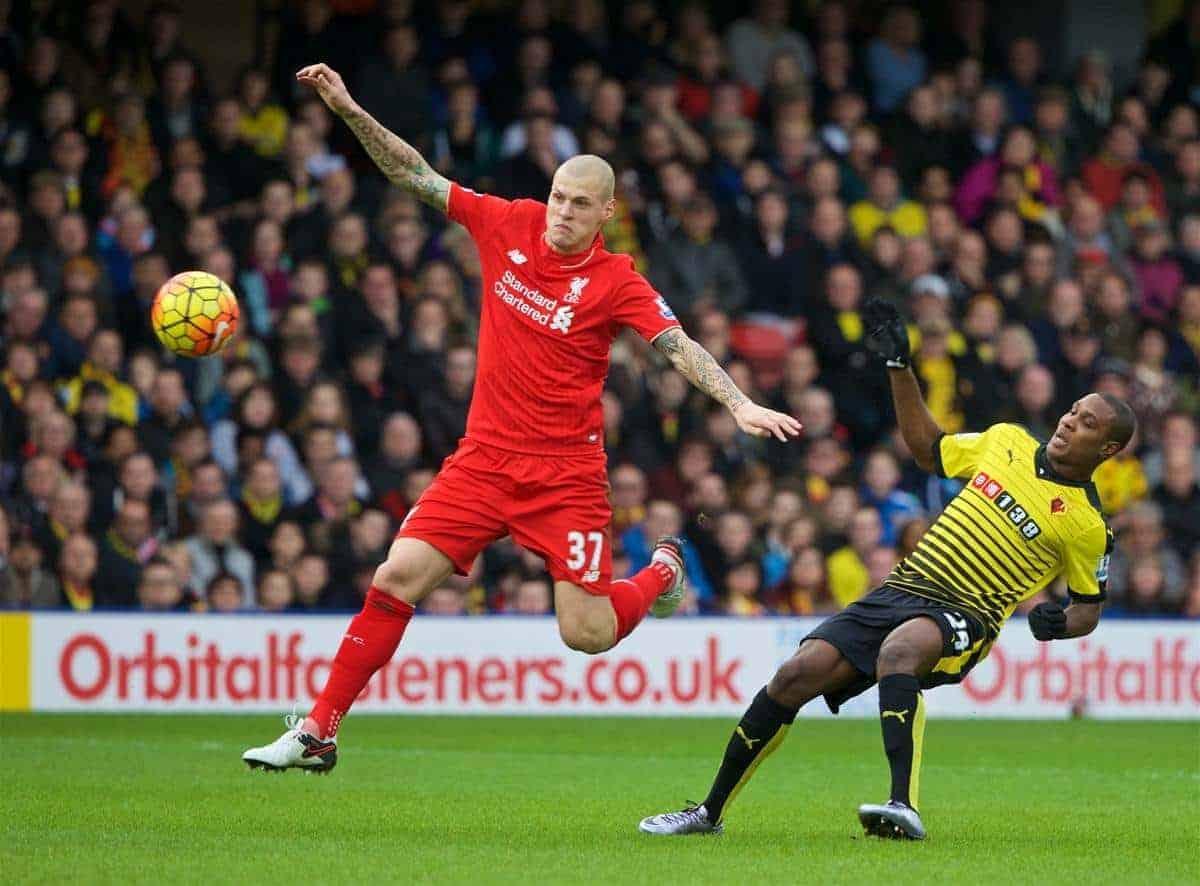 There was much cause for concern as Liverpool fell to a 3-0 defeat to Watford on Sunday, and here we round up the social media reaction from this Vicarage Road loss.

An opportunistic effort from Nathan Ake and two from the in-form Odion Ighalo saw Watford waltz to victory at Vicarage Road, with Liverpool dismal throughout.

Ake’s goal came just three minutes into the clash, with Adam Bogdan’s poor attempt at catching a corner allowing the Dutchman to stab home from close range, provoking the ire of the Liverpool support.

Someone get rid of our goalkeeper coach. This is beyond a joke. #lfc #bogdan

Ighalo was a constant threat, and muscling Martin Skrtel off the ball on 15 minutes the Nigerian put Watford 2-0 up and on their way to a comfortable win.

Klopp can make whatever tactical changes he wants but when you make basic errors as we have, we've got no chance

Neven Subotic definitely wouldn't do that Liverpool back-line any harm…

There were few positives for Jurgen Klopp to draw upon in the first half, through the bright performance of Jordan Henderson was roundly acknowledged.

Henderson the only Liverpool player who knows what he's doing at the moment.

Jordan Henderson's switch passing has been a sight to behold this afternoon. Sweet and true. Like a good Taylor Swift number.

Henderson's passing has been outstanding.

With Skrtel struggling with an injury towards the end of the opening 45 minutes, Klopp made an intriguing switch, bringing on Belgian striker Divock Origi in his place.

Skrtel is the most fake hard man in the history of football. He gets bullied by strikers time and time again.

Sooo. If that’s hamstring, forget Skrtel for xmas fixtures. Quite a few games for someone else to finally make a case for that spot.

What I would give for a fit Joe Gomez right now!!!

The German had much more work to do, however, and will have been relieved when Mark Clattenburg called for half-time, with despondency soaking in.

Not a single player that's playing to the level expected today. Every pass and second ball going to a yellow shirt.

Will be delighted if I'm proved wrong, but there is no way #LFC are scoring today. Just one of those horrid games when nothing goes right.

Nothing good to say about any of the #LFC side so far today, the rare 7 day gap between games seems to have done them more harm than good.

Despite naming a positive, attacking lineup that featured the same front three that decimated both Chelsea and Manchester City, Klopp saw little in terms of invention in the final third, with Philippe Coutinho‘s poor movement undermining nice work from Origi.

Coutinho moaning at Origi for not releasing the pass but he was always in an offside position.

Coutinho didn't hold his run, to be fair to Origi

Worst offending teams for offsides in Europe average 3.7 per game.
Liverpool are at 8 and counting with over half an hour to go.

It was no better at the back, and Mamadou Sakho almost allowed Ighalo a second with a slip on the edge of the area—but this time Bogdan was on hand to make a solid save.

Easily Sakho's worst game, but he's hardly going to be sharp just after returning from injury

Liverpool showed no sign of recovery despite this potentially game-changing move.

There can't be a team in the league who are as bad a corners {both attacking and defending} as Liverpool. Truly gobsmackingly awful.

Liverpool are toothless up front; cowering and disorganized at the back and midfield, well, what midfield?

Ighalo made the Reds pay for their dismal display as the clash neared its conclusion, nodding beyond Bogdan to secure his second, Watford‘s third and what is only the Hornets’ second win over Liverpool in their history.

Despite being really poor, Watford have been excellent. Ighalo & Deeney have been unstoppable

There was a sense of relief at full-time, as Clattenburg put a stop to what was a dire performance all round.

Pitiful, absolutely pitiful. Liverpool needed a new manager but that was never the only problem at the club. Well played #WatfordFC.

Can't enjoy United being awful. You're ruining it for me, LFC

The committee should be sacked.

This is the moment the players should be walking to the fans. This time, to apologise.

Klopp must now prepare his side to take on table-topping Leicester City at Anfield on Boxing Day, and this afternoon showed there is much to be done if Liverpool can hope to secure a result.