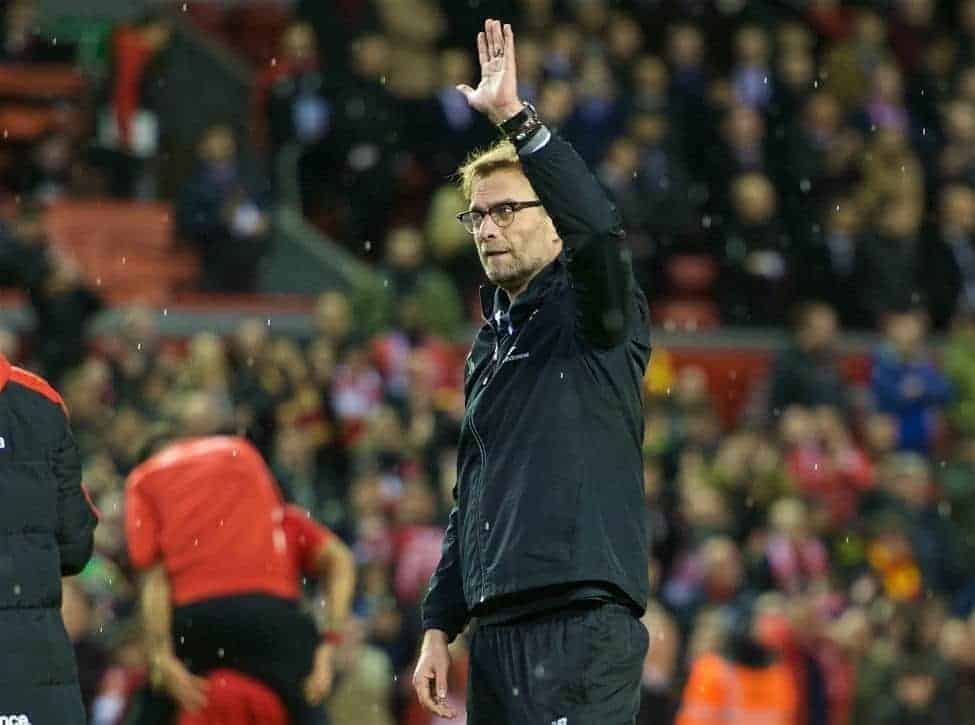 Liverpool manager Jurgen Klopp believes an all-Merseyside League Cup final would be great for the city and accepts it may just provide that little extra motivation.

His side scraped past Stoke 6-5 on penalties after Marko Arnautovic’s first-half offside goal had levelled the two-legged tie 1-1 on aggregate.

With Everton holding a 2-1 lead heading into their second leg at Manchester City on Wednesday there is the prospect for a first Merseyside final for 27 years, although the two teams did meet at Wembley in the FA Cup semi-final of 2012 in which Liverpool prevailed.

“I heard about it being the biggest thing but only if you beat them,” said Klopp.

“I have no chance and I cannot have any influence. We will watch the game tomorrow and Man City being a goal down it is possible.

“We take what it is. For sure it is the north of England final and if everything comes together in a good way it is a derby at Wembley.

“That will be great for the whole city. This city will have deserved it because it is a great place for football and how Blues and Reds live together in a normal life is how football should be.

“In a derby do everything that you can do to beat them.

“If the whole of Liverpool goes there it will be good but then we should look at our houses – there will be an empty city.”

Liverpool’s performance was less than impressive but Joe Allen’s winning penalty, after goalkeeper Simon Mignolet had saved from Peter Crouch and Marc Muniesa, capped something of a mini-revival for the Wales midfielder.

“We only decided the first five [penalty takers] but he took the ball and he is a good lad,” added Klopp, who did not watch any of the spot-kicks.

“It is not the most easy situation for players when you don’t play from the beginning in matches like this.

“He came in and is a really good character and he decided the game for us.

“I did not see one shot. I was behind the wall of my players so I have to watch it at home.

“In the end we won without me watching, which was good.”

Asked what winning a trophy in London next month would mean Klopp added: “A really good night in London!”