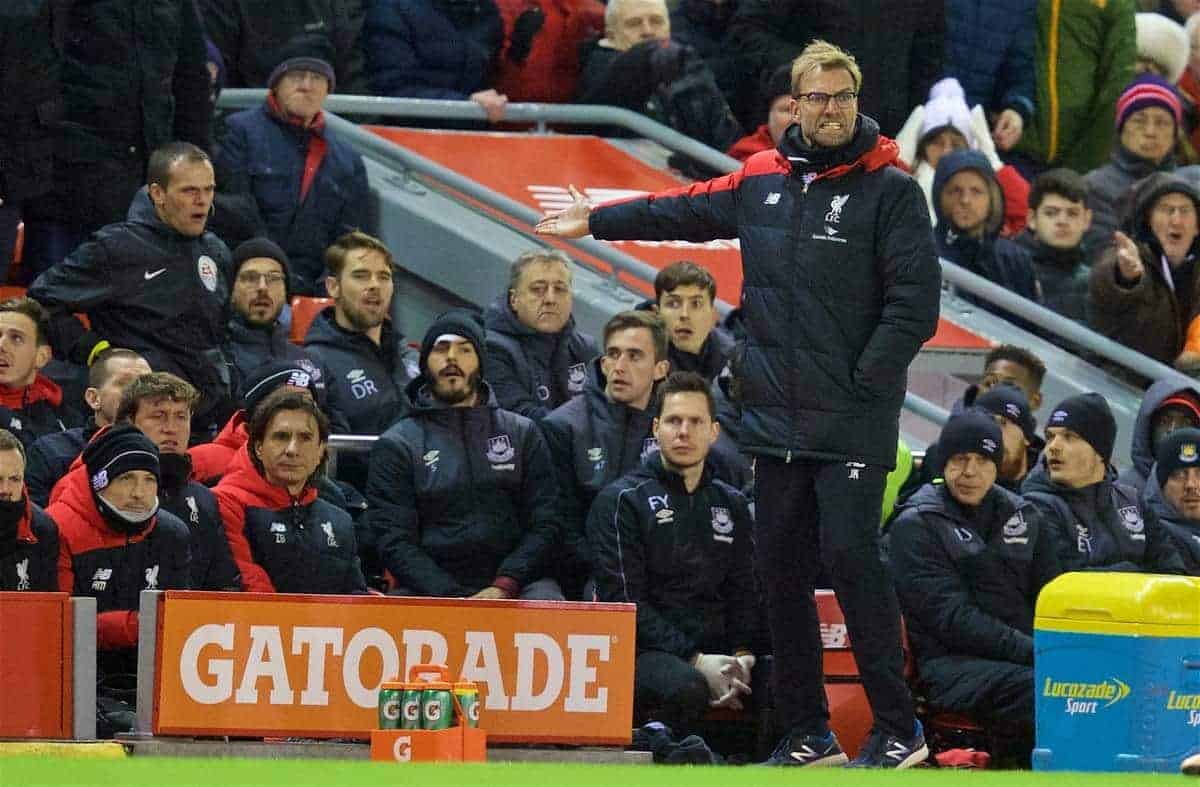 An inexperienced Liverpool were held to a 0-0 stalemate against West Ham United in the FA Cup at Anfield, where the result was the only downside of an overall positive afternoon.

Jurgen Klopp’s side have to do it all again at Upton Park after being held to a frustrating goalless draw against the experienced Hammers.

Finishing was the only component lacking from a promising display from Klopp’s much-changed and youthful side, with Joao Carlos Teixeira and Christian Benteke both being denied with a couple of efforts each.

It was a positive performance from a makeshift Reds team, and Klopp can certainly be pleased with his side’s showing, even though a replay wasn’t avoided as he had hoped.

Here are five talking points from this cup clash.

Screening in his holding role, Kevin Stewart impressed with the fierceness of his competing – winning more tackles than anyone, with six – alongside his tidiness in possession, doing both the simple things and dirty work well.

Alongside the ex-Swindon loanee, Cameron Brannagan was even more impressive, turning in a man-of-the-match display.

The teenager’s class was evident as he dictated Liverpool’s play – making two key passes and posting a 91 percent pass accuracy – while his whipped dead-ball deliveries were nice to see with Liverpool lacking a threat from set-pieces this season.

Marshalled by the experienced head of Allen, who was typically composed and tenacious, the fearless trio bossed the physically superior Hammers’ midfield of Alex Song, Cheikhou Kouyate and Pedro Obiang, outfighting and outplaying the visitors.

Stewart and Brannagan both proved they can be trusted on the big stage, and will hope they are given another chance when the Reds look to complete the job at Upton Park.

Only composure and ruthlessness in front of goal cost Liverpool a place in the fifth round after a largely dominant display against Bilic’s men.

The Reds’ best chances fell to Teixeira, who was denied twice by Darren Randolph – but he should have struck with much more conviction and precision – while Allen blazed his big moment over after Benteke saw his header cleared off the line.

Soon after, two weak efforts in quick succession were easily kept out.

The Belgian should have done much better with the second of those, but his slack finishing once again summed up another poor display in attack, where he failed to provide any remote threat, or contribute positively to Liverpool’s play—outshone by those playing in support of him.

After showing signs of rediscovering their ruthlessness in front of goal, it was an evening of the same old.

The Reds were out-battled with ease in their 2-0 Premier League capitulation against the Hammers at the turn of the year – but there was no repeat at Anfield, with Klopp’s youngsters rising to the challenge.

Stewart and Brannagan set the tone from the off with the pair busy and aggressive in their off-ball work in midfield – where they made 10 tackles between them – while Brad Smith was aggressive and front-footed in his defending, which saw him impress down the left side.

While Liverpool were dominated aerially at Upton Park four weeks ago, Dejan Lovren and Steven Caulker ensured it didn’t happen for a second time – though the absence of Andy Carroll the visitors helped that.

Elsewhere, even though offensive productivity was lacking from both, neither Teixeira or Jordon Ibe shirked the dirty work.

Up against an experienced and physical West Ham side – in midfield especially – it was pleasing to see the Reds stand up to the battle after rolling over against Bilic’s men just weeks ago.

After a blazing start to life under Klopp, Ibe’s form has dipped considerably, and it continued with another disappointing display.

One of Liverpool’s senior players on the night – despite his tender years – the Reds needed Ibe to carry the fight going forward and take responsibility to make the difference, and while he must be praised for his determination to do so, his production and quality was again lacking.

The teenager was certainly not helped by the immobile Benteke and also having Teixeira struggling on the periphery of the action for large parts, but he didn’t produce enough despite some rare moments of promise.

His pacy dribbles led to little and his use of the ball was poor, often hindering the pace of building attacks.

It’s easy to forget that Ibe is still so young and he undoubtedly has huge potential, but for someone of his experience despite his young age, he must start showing more.

Klopp revealed his desperation to avoid a replay with the fixture schedule already hectic for the Reds, but the two sides will have to do it all again in east London.

Liverpool now face eight games in the space of a month, starting with Tuesday’s trip to Leicester and ending with Man City’s arrival at Anfield at the beginning of March, which also includes the recommencing of the Europa League—a competition that has already provided a tough juggling act.

Jurgen Klopp on when replay will be scheduled given fixture build-up: 'Maybe it'll be in the morning of a day when we play in the afternoon'

Added to the nine games already played since 2016, Liverpool will have played every 3.5 days since the new year, that all coming after the traditionally busy December and festive fixtures, too.

Klopp will be hopeful injury absentees return to provide him with more of a squad to utilise over the coming weeks, while bolstering his squad before the transfer deadline may also prove more tempting.