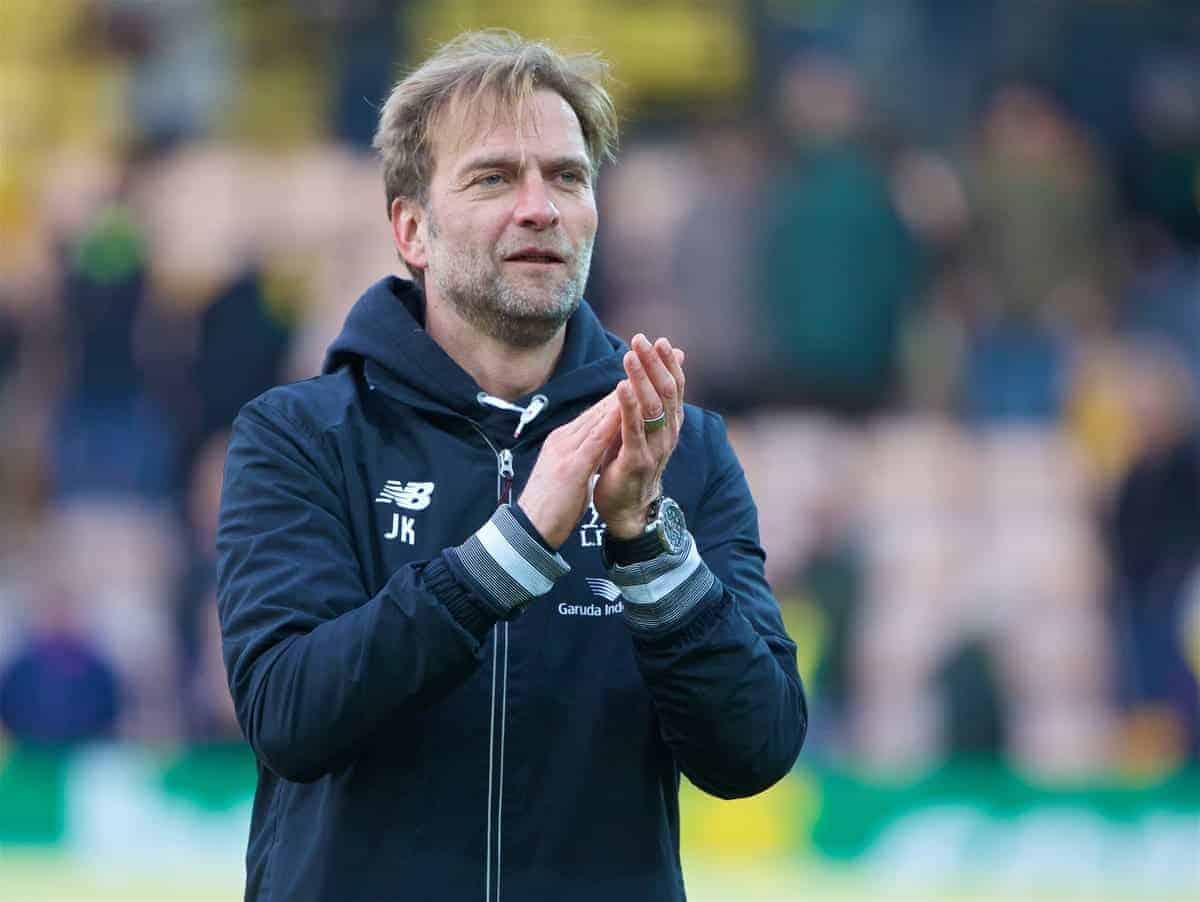 Jurgen Klopp told his Liverpool players to go out and score one more than Norwich in Saturday's nine-goal thriller at Carrow Road.

The Reds prevailed 5-4, courtesy of Adam Lallana's last-gasp strike, after their dreadful defending was eclipsed by Norwich's.

Klopp believes his side's defending was improved, yet still they were susceptible and were 2-1 down at half-time when the German told his players to go for broke.

"We were really angry with ourselves at half-time," Klopp said.

"'Come on, do what you want, but if you lose today, we're flying flags (at half mast). Go and do what you can and if they get another two, then it is, but try everything'."

Liverpool conceded another, before rallying to go 4-3 up.

Then Sebastien Bassong equalised in stoppage time before Lallana's even later goal.

Klopp, whose glasses broke in celebrating the winner, refused to look too far ahead, with a place at Wembley at stake against Stoke in Tuesday night's Capital One Cup semi-final second leg.

"It's a long way for us. We cannot see where (the season) will end, especially without glasses," Klopp added.

"I'm not sure we would've scored five, if we didn't concede four. It's football, spectacular.

"When I saw how they played after the third goal, that was really good football, really good. With everything.

"We played not always good. But 70, 80 per cent of the game we played football and that's what you have to do.

Klopp lamented his side's defensive failings, comparing them unfavourably to his own undistinguished playing career with Mainz.

"It's really frustrating. It's not something I like to make jokes about, our defence," Klopp added.

"I was an under-average player, but if I was good at something it was defending set-plays. It's not that difficult.

"Now you saw it's like a self-fulfilling prophecy. Everybody's talking about it, we're thinking about it.

Liverpool's attacking play has been criticised, but now they have scored three times against Arsenal and Exeter and five against Norwich in the last four matches.

The goal which pleased Klopp most was Jordan Henderson's, when the captain was found after Nathaniel Clyne and Roberto Firmino combined down the right.

"We had this season 350 times a player in exactly this position, but we didn't play the pass," Klopp added.

"We played the pass and in this moment I was happier and happier (still) when the ball was in the goal."

Firmino scored twice despite pre-match criticism from Michael Owen, who deems the Brazilian not to be a striker.

Klopp says strikers come in different shapes and sizes and that Firmino justified his selection ahead of Christian Benteke.

"He (Firmino) can play and score goals and he is for us a good option to play with," Klopp added.