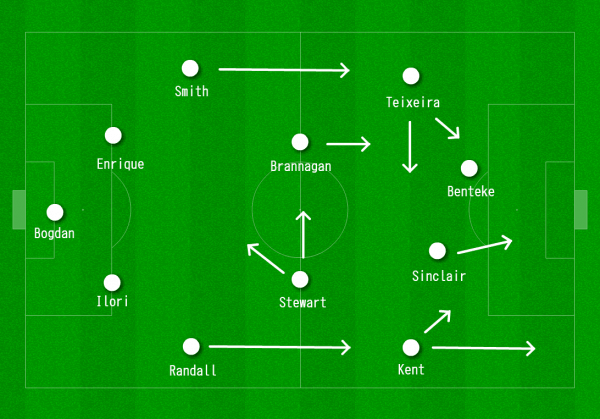 Not a night for pretty football, and far from a definitive vision of Klopp’s Liverpool, a 2-2 draw away to Exeter can be considered a fair result for a young Reds side.

Facing 13 injuries within his first-team squad, Klopp drafted in a number of young stars for this FA Cup clash, handing Tiago Ilori, Kevin Stewart and Ryan Kent their Liverpool debuts.

Making wholesale changes to the side that won 1-0 away to Stoke City on Tuesday night, Klopp deployed a mutation of a 4-4-2 formation from kickoff at St. James Park.

This saw a two-man midfield of Stewart and Cameron Brannagan pull the strings and Kent and Joao Carlos Teixeira look to provide a spark from the flanks, with the balance between both partnerships giving Liverpool an edge in the first half.

It was the best that Klopp could put together with his limited resources, and the energy and tenacity of his midfield showed signs of promise.

But with Exeter heading into half-time 2-1 up, Klopp waited just 12 minutes before making a change.

Bringing Pedro Chirivella on for Kent, Klopp switched the emphasis from the flanks to a central overload, with the Spanish midfielder prompting a diamond setup in midfield.

With Teixeira operating on the edge of the penalty area as Liverpool’s No. 10, Brannagan and Chirivella pushed forward into wide areas.

Brannagan almost gave Liverpool a leveller with an exceptional cross from the left flank, but Benteke’s header found the gloves of a grateful Grecians goalkeeper in Bobby Olejnik.

With Liverpool lacking any real incision in the final third however, Klopp made another change.

Bringing Ojo on for Sinclair, Klopp moved to a 4-3-3 formation, looking to exploit the pace and power of Smith and Ojo on the left flank.

Two minutes later, and Liverpool had found their leveller.

With Smith rampaging into the box from left-back, Chirivella played an excellent ball out to Ojo, with the 18-year-old maintaining his composure to slot a low cross into the six-yard area.

Smith was on hand to divert the rebound into the net, and Liverpool earned themselves an Anfield replay—where Klopp will be hoping to field a stronger side.

The German showed his managerial steel by ignoring the experienced options on his bench in Adam Lallana and Lucas Leiva, and by rolling with the punches and introducing a positive option in Ojo, he helped secure a result for the Reds.