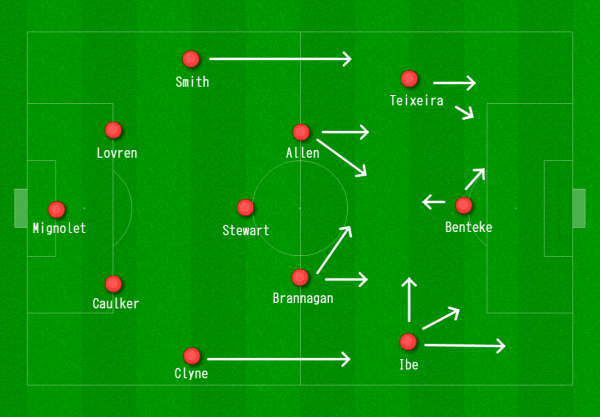 Despite a solid performance from a young Liverpool side at Anfield, a floundering attack saw West Ham United earn a 0-0 FA Cup draw on Saturday night.

Making 10 changes to the side that secured passage to the League Cup final with a penalty-shootout win over Stoke City on Tuesday night, Jurgen Klopp will have expected his young Liverpool side to start slowly in the opening stages against West Ham.

But despite naming an inexperienced lineup for this FA Cup fourth-round tie, the German can be encouraged by their overall display.

Only Simon Mignolet retained his place on the field, with Klopp seemingly not trusting Danny Ward as deputy at this stage.

Ahead of Mignolet in defence were Nathaniel Clyne, Steven Caulker, Dejan Lovren and Brad Smith, providing stability and energy from the Liverpool half.

Aided by the diligent Kevin Stewart in the holding role, Cameron Brannagan and captain-for-the-day Joe Allen were tasked with box-to-box duties in the midfield, with the trio forming a compact, effective unit.

That Liverpool kept West Ham at bay for large portions of this cold Anfield encounter was a testament to Klopp’s setup and the determination of his peripheral figures.

But with the Reds unable to break Slaven Bilic’s side down over 90 minutes, Klopp will have spotted a lack of chemistry in attack.

Deploying Christian Benteke as a lone striker, flanked by Jordon Ibe on the right and Joao Carlos Teixeira on the left, Klopp flooded his forward line with individual quality.

But with Benteke a cross-hoovering target man, Teixeira a between-the-lines playmaker and Ibe a raw wide option, this failed to create any dangerous openings.

Benteke struggled to find a balance between running the channels and dropping deep to hold up play and Teixeira’s lack of intensity saw him flounder in possession, squandering promising moves.

Meanwhile, Ibe’s tendency to drift inside with his head down saw him consistently ignore intelligent runs from his team-mates.

Ibe was perhaps most disappointing on the night, with his reluctance to lay the ball off to his fellow attackers frustrating supporters throughout.

Klopp will have been desperate to secure victory at the first time of asking and avoid another FA Cup replay, and with the scores at 0-0 with 10 minutes to go he was forced to shuffle his pack.

Bringing Sheyi Ojo on in place of Ibe, Klopp injected the pace and dynamism that his attacking unit had been sorely missing, with the 18-year-old keeping his head up whenever in possession and looking to trouble the West Ham defence with quick forward play.

Minutes after coming on, the academy talent played a short pass inside within the Liverpool half and immediately burst towards the Hammers’ penalty area.

Unfortunately, with Teixeira picking up the ball in a central position, the Portuguese missed his opening, instead attempting an ambitious and ultimately miscued through ball for the disappointing Benteke.

Liverpool had 18 shots on goal on Saturday night, 11 more than their opponents, but as Klopp herded his side off at full-time with the score at 0-0, his frustration will have stemmed from the Reds’ inability to create clear-cut opportunities.

With Ibe, Teixeira and Benteke failing to find an understanding in the final third, Liverpool’s attack crumbled.

Klopp will think twice about fielding this trio in February’s replay.