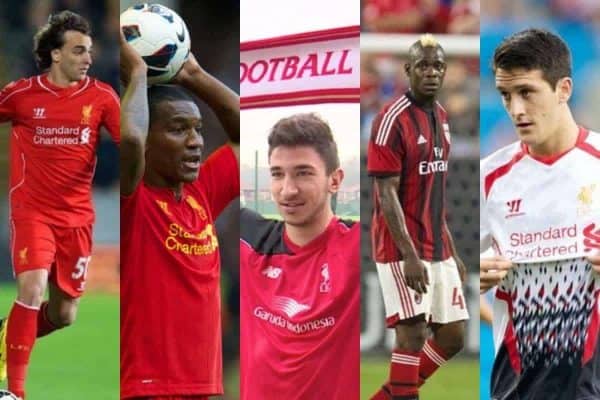 We take a look at how the 14 loaned members of Jurgen Klopp’s squad fared for their temporary clubs throughout the week.

Lazar Markovic was again in fine form for Fenerbahce in midweek, as he netted a spectacular late winner to hand his side a 1-0 cup win over Tuzlaspor.

Vitor Pereira introduced the Serbian after 64 minutes with the tie goalless, and his decision proved an inspired one with the 21-year-old capping a lively cameo display by crashing home a superb match-winning effort in off the underside of the crossbar in stoppage time.

Markovic’s winner saw him earn a place in the XI for Sunday’s league clash with Rizespor, and he completed the full 90 minutes in the 2-1 win.

From his familiar right-sided role in Fener’s attacking midfield, the Serbian turned in a quieter display despite some positive moments in flashes with his dribbling and driving runs from midfield.

Pereira’s side extended their lead at the top of the SuperLig table to five points.

In La Liga, Luis Alberto continued his fine run of form for Deportivo La Coruna on Sunday, claiming an outrageous no-look assist in their 1-1 draw against Gary Neville’s Valencia.

The creative midfielder completed the full 90 minutes and turned in another influential display in his role supporting partner-in-crime, Lucas Perez, the man who Alberto set up with a sublime reverse pass.

Receiving, turning and travelling with the ball with the goalscorer to his right, Alberto looked left as he played an exquisite pass with the outside of his right foot the opposite way to release the No.7.

Lucas made no mistake in rounding the ‘keeper and slotting home to put Depor ahead, and Alberto almost doubled the lead soon after.

Mario Balotelli made his second appearance on his comeback from injury as he continues his managed return to match action.

The striker played the final 22 minutes of AC Milan’s 2-2 draw against Empoli on Saturday night, coming on with the scores level and the match finely poised as Sinisa Mihajlovic’s men searched for a late winner.

Balotelli couldn’t provide the moment of inspiration as he continued to regain match fitness and sharpness, but the Italy international did pick up a yellow card for his efforts in the draw.

It was a week of both pride and frustration for Sergi Canos, who played on the international and domestic stage.

The Reds youngster enjoyed a proud moment in midweek, as he made his bow for Spain’s under-19 side against Italy, coming on at half time of the 2-1 loss to the Azzurri, but he couldn’t prevent his side falling to defeat.

On his return to Griffin Park on Saturday, Canos started among the Brentford substitutes in their 3-1 win over Preston as he paid the price for being hauled off at half-time against Burnley last weekend.

The Spaniard was restricted to a cameo role off the bench for the final 12 minutes of the Deepdale win in which he had little time to make an impact, but he was on the pitch as the Bees wrapped up three points with a third goal.

Come on!!!!!! That feeling again…?? Fantastic win and away support as always. On to Tuesday now!! #brentfordfc pic.twitter.com/Va0A0iDcKM

Elsewhere in the Football League, Lawrence Vigouroux enjoyed another 90 minutes between the sticks for Swindon Town in their 1-1 draw against Sheffield United, but turned in a mixed display at Brammall Lane.

The Chilean was helpless to prevent Billy Sharp smashing home a penalty for United, but he produced some nervy moments – including a poor pass out from the back that he then rescued with a desperate block – though he did make three vital saves to ensure his side went home with a point.

In the Premier League, Andre Wisdom missed Norwich’s crazy 5-4 loss against the Reds, with the loaned defender unable to feature against his parent club.

Back in Europe, Marko Grujic played his first games for Red Star Belgrade in midweek since signing for Liverpool, playing 45 minutes in each of their mid-season friendlies with Ankaran and Kolpar.

The Serbian claimed an assist in the 3-0 win over Ankaran despite only playing the first half, and he played a further 45 minutes against Kolpar, helping Red Star to a 4-3 win as they prepare for their return to Serbian SuperLiga action.

Meanwhile in Belgium, Allan Rodrigues made his debut for Sint-Truiden on Sunday, in a 2-1 home loss to Westerlo.

The Brazilian started on the bench at Stayen Sint Truiden, and he played the final nine minutes on his first appearance, coming on into the right of a front three – but he couldn’t rescue a late point for his side on his first outing.

Samed Yesil enjoyed more action for Luzern on their mid-season training camp in Malaga, featuring in two games for Markus Babbel’s side.

The German played 45 minutes against Freiburg, before he then entered as a second-half substitute in the penultimate friendly of the winter break camp against Dynamo Kiev, impressing in the second outing with a lively display, despite not finding the net.

Having waited months for first-team match action, Taiwo Awoniyi made his second appearance in as many games for Frankfurt, adding to his recent friendly run-out against Koln.

The Nigerian played the first 45 minutes of the 2-0 win over Dnipro, being withdrawn at half-time in the final winter-break friendly win as the German side prepare for their return to the domestic season.

And finally, academy product Will Marsh made up for a month of no match action by scoring for Sheffield Wednesday’s U21s side in their 3-2 loss against Bolton Wanderers in midweek, breaking the offside trap before finishing when one-on-one.

Lloyd Jones and Jordan Williams missed another week of action with the pair still sidelined by their respective injuries.