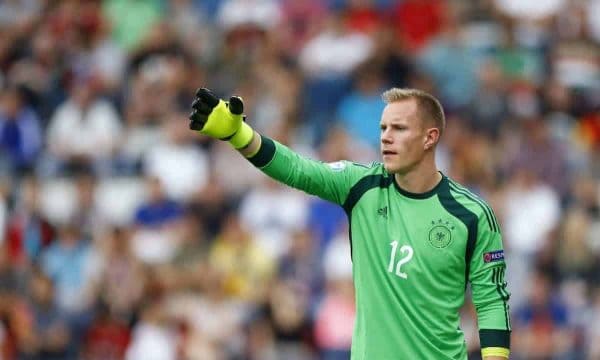 “Good goalkeepers” but no interest in Ter Stegen and Horn, claims Klopp

Jurgen Klopp has once again denied rumoured interest in a new goalkeeper, quashing speculation of moves for two German No. 1s.

Barcelona’s Marc-Andre ter Stegen and Timo Horn of Cologne have been mentioned among a host of other names as Klopp reportedly searches for a replacement for Simon Mignolet.

But speaking to reporters ahead of Tuesday night’s clash with Stoke City, the Liverpool manager denied any interest.

“No. Good goalkeepers, but no,” he said.

“We have some problems with injuries, thank god not the goalkeepers.

“I’ve said plenty of times, the goalkeeper situation is absolutely more than okay. We are satisfied.

Mignolet has come under criticism throughout his time at Liverpool, with supporters questioning his ability as a top-level goalkeeper.

But, as Klopp has repeatedly stressed this season, he remains the Reds’ first choice, with reports suggesting that he would sign a new, long-term contract this season.

One player who is likely to join the Reds this January, however, is Red Star Belgrade midfielder Marko Grujic.

The 19-year-old is undergoing a medical at Melwood on Monday, ahead of a proposed £5 million move to Merseyside—with reports indicating that he would rejoin Red Star for the rest of 2015/16.

Klopp remained tight-lipped on the subject of Grujic’s arrival, however.

“As I know, as long as there’s no sign I don’t want to talk about it,” he continued.

“That’s all I can say in this moment—you have to wait.”

The German was also dismissive of suggestions that on-loan AC Milan striker Mario Balotelli could seek a return to Liverpool at the end of the season.

Balotelli’s agent, Mino Raiola, has claimed that the Italian was interested in meeting Klopp to discuss his future.

“I don’t have time to think about things for next summer,” Klopp reiterated.

“Maybe we’ll have a talk, but it’s nothing I can think about [now].”

As ever, Klopp remains focussed on the players currently at his disposal, and it would be foolish to expect otherwise.

Heading to the Britannia Stadium on Tuesday night without a host of first-team players, however, it is impossible to ignore the lack of depth within Klopp’s squad.