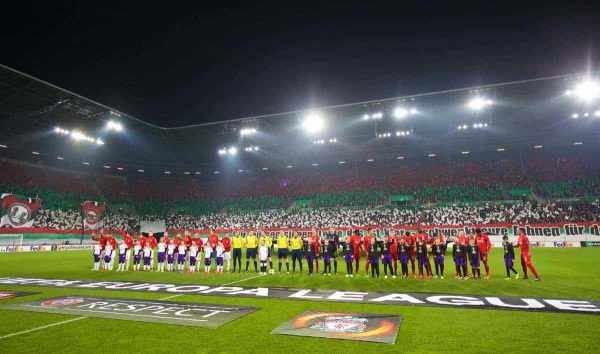 It proved to be a very interesting night of Europa League last-32 action on Thursday, and we round-up the key events that unfolded.

Liverpool earned a 0-0 draw in their first-leg clash with FC Augsburg in Germany, in what was an instantly forgettable 90 minutes of football.

Jurgen Klopp will be content with the result, however, and the Reds should now progress after the second-leg at Anfield next week.

There were 16 matches in total on Thursday evening, with a perfect blend of shocks, great goals and absolute hammerings.

Here are some standout moments from the night.

Joy for Neville, misery for United

Gary Neville has endured a tough time of things at Valencia, but having earned his first La Liga win last weekend, the former England right-back had a night to cherish in his side’s home tie against Rapid Vienna.

Valencia produced a staggering first-half showing, in which they were 5-0 up at half-time, and Rodrigo’s late strike put the icing on the cake.

It was very different for Neville’s boyhood team, however, as Man United‘s embarrassing season continued away to unknown Midtjylland.

Louis van Gaal’s side were beaten 2-1, despite Memphis Depay opening the scoring for the visitors, and the United manager is closer than ever to being relieved of his duties.

Injury to David de Gea in the pre-match warm-up compounded their misery, and it could also have an enormous impact on the Red Devils’ season, should the Spaniard miss a chunk of action.

Draw for Spurs in Florence

Tottenham‘s last-32 tie against Fiorentina looked the toughest that any of the remaining three English clubs faced in the competition.

Despite resting a few key players, Mauricio Pochettino’s side came away with a very credible draw, and are now favourites to make it into the next round.

Nacer Chadli’s penalty gave Spurs a first-half lead but Federico Bernadeschi levelled the scores after 59 minutes. Dele Alli, meanwhile, was very lucky not to be sent-off after kicking Nenad Tomovic.

There are many who feel the north Londoners’ cup commitments could affect their brilliant Premier League form, and it will be intriguing to see how Pochettino’s men cope with the fixture pile-up.

Incredible tifo by Dortmund fans, urging @BVB to "complete the album" and win the #UEL pic.twitter.com/uWKUTo3urn

Borussia Dortmund were the bookies’ favourites to win this season’s Europa League prior to the first-leg action, and they backed that up ruthlessly on Thursday.

Thomas Tuchel’s side hosted a potentially dangerous Porto team at Signal Iduna Park, but a 2-0 win was sealed thanks to goals from Lukasz Piszczek and Marco Reus.

The German giants really do look like the team to beat, especially as much-fancied Napoli are in a precarious position, following a 1-0 defeat at Villarreal.

They will take some stopping, especially in front of the most passionate crowd in European football.

Almost without noticing, Sevilla have won four Europa League titles in the last decade, which is a commendable achievement.

The La Liga outfit are looking for a third straight triumph in the competition, and they look strong contenders without question.

Two goals from Fernando Llorente, and another for Kevin Gameiro, clinched a routine 3-0 win at home to Molde, all but booking their place in the last-16 in the process.

Sevilla are a team Liverpool will very much want to avoid, should they both get through their respective second-leg showdowns.

Goal of the Season contender in Marseille

Marseille’s clash with Athletic Bilbao always looked like a tight game on paper, with both sides relatively evenly matched.

It felt like a tie that would be separated by fine margins, and Bilbao completed a vital 1-0 win thanks to a piece of sheer brilliance.

Aritz Aduriz, the club’s veteran striker, sent a stunning 35-yard volley into the Marseille net, in what was easily the best goal of the night, and one of the finest of 2015/16 so far.

Aduriz is having a season to remember, with the 35-year-old scoring 26 goals in 39 appearances to date.