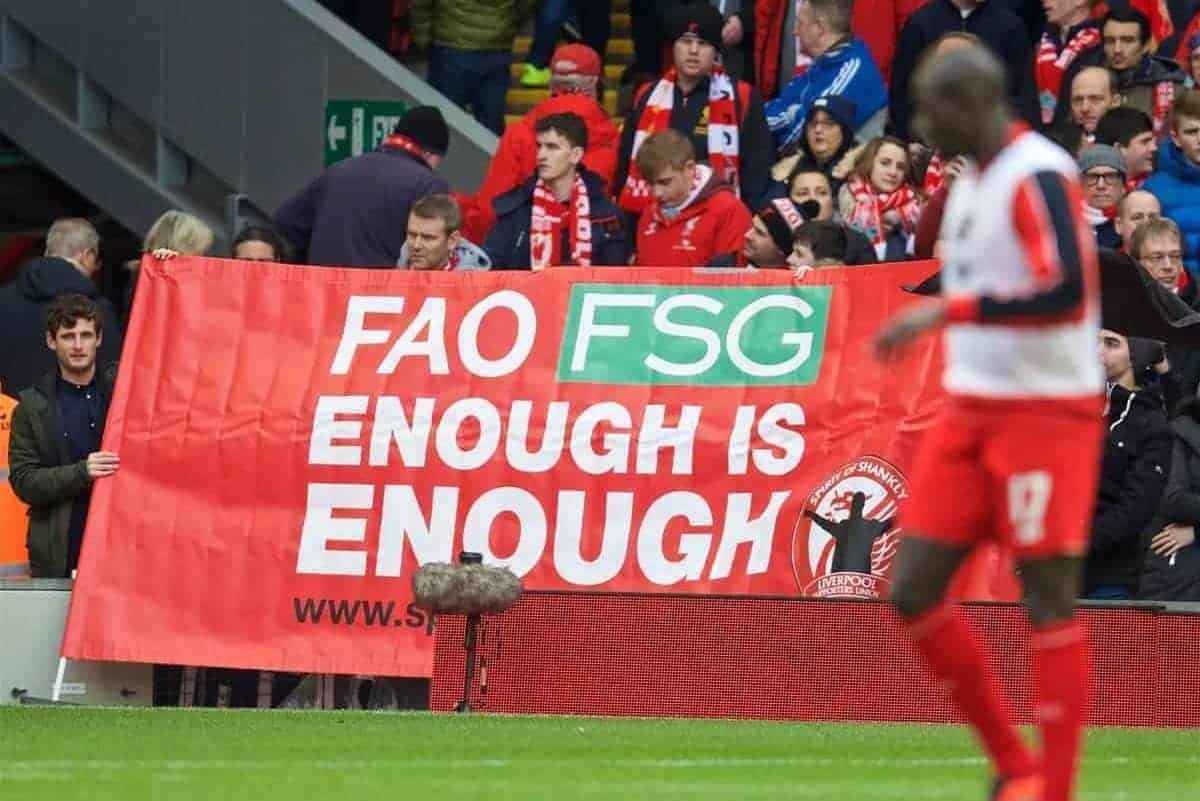 Joining supporters in rallying against absurd new pricing structure, Liverpool players are said to have “baulked” at the cost of a box in the new Main Stand.

It is not often that you will hear a Premier League player express concerns about money, such is the wealth available to them weekly.

But with Liverpool’s avarice owners looking to profit from the redevelopment of the Main Stand at Anfield, their greed is thought to have even taken the Reds squad aback.

After thousands of supporters leaft their seats 77 minutes into Liverpool’s 2-2 draw with Sunderland on Saturday, in protest of the new ticket pricing structure—with single tickets rising to an incredible £77—the Independent‘s Michael Calvin revealed a similar dispute within Jurgen Klopp‘s squad.

The club are believed to have offered players an upgraded box in the new Main Stand for an incredible £300,000 a season.

“When Liverpool’s players were offered first refusal on ‘an executive hospitality experience’ in a US-style ‘super box’ capable of seating 25 people in Anfield’s new main stand, they baulked at the expense,” Calvin writes.

“The sales pitch spoke of a ‘specially designed roof which will project a wall of noise from over 20,000 fans on to the pitch.’

“But the fee, ‘approximately’ £13,000 per person, per season, affronted even the multi-millionaires who are supposed working-class heroes.

“Allowing for wriggle room in the negotiating process—many first-team players currently share 10-seater executive boxes which retail at around £75,000 despite being officially priced at £100,000—that meant finding in the region of £300,000 a year. No deal. No way. No how.”

Calvin suggests that a similar box at Old Trafford retails at £175,000, while at Arsenal‘s Emirates Stadium the most expensive package costs £150,000.

That even players are struggling to come to terms with the club’s greed is a powerful statement.

But what is more concerning is that, with such significant income no doubt flooding into the club due to these corporate “experiences,” that supporters are still asked to cough up extra for a plastic seat is bizarre.

With £8.3 billion of TV money being shared between Premier League clubs next season, the extra £2 million made per season by this increase is trivial.

Liverpool paid over 16 times that to sign Christian Benteke last summer, while James Milner is believed to earn close to four times that per season in wages.

While Fenway Sports Group can guarantee that this money will continue to flood into the club, such is supporters’ loyalty to Liverpool, that they are capitalising on this is repulsive.