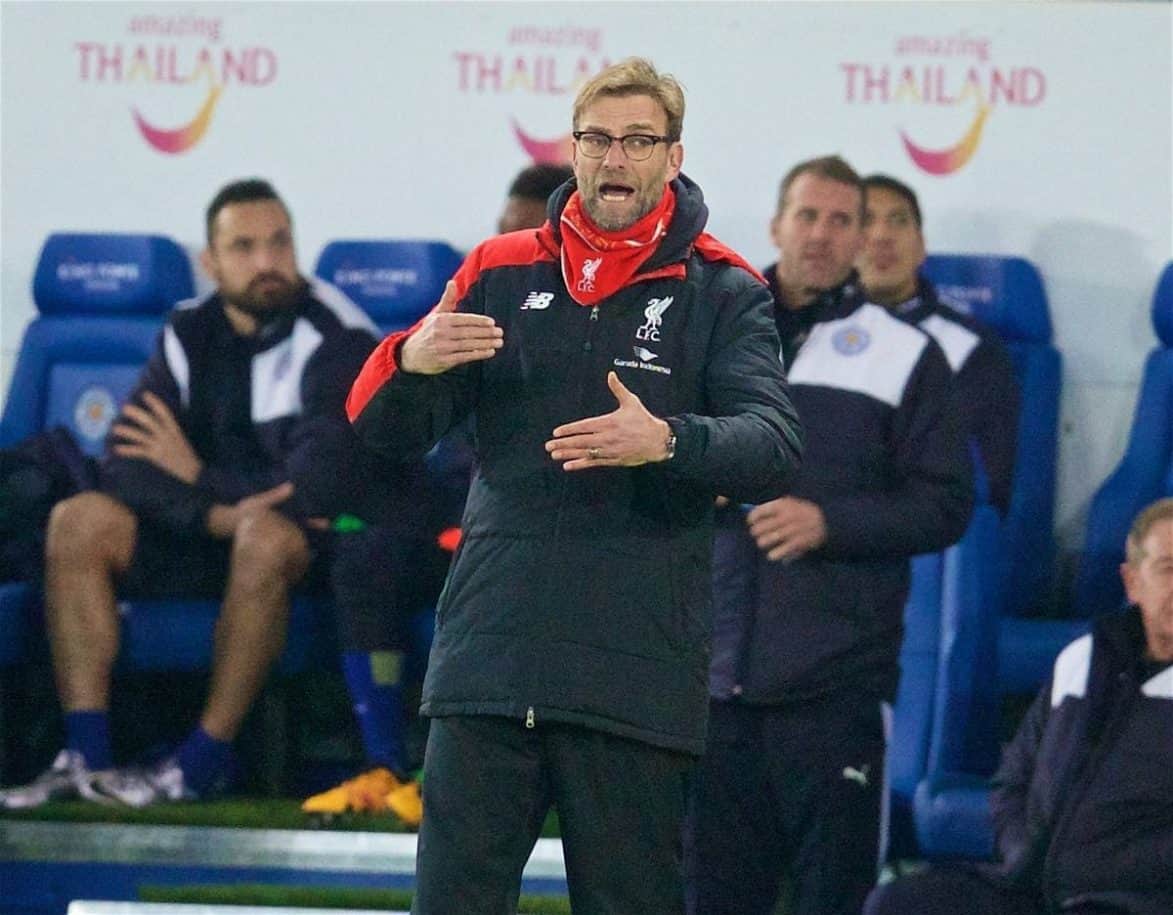 A lack of quality and endeavour hallmarked Liverpool’s 2-0 defeat away to Leicester City on Tuesday night, proving an all-round disappointment.

Liverpool’s Tuesday night trip to the King Power Stadium saw Jurgen Klopp‘s side look to firmly establish themselves in the race for the Premier League‘s top four.

After a dull 0-0 draw against West Ham United in the FA Cup on Saturday evening, supporters were hoping for a more effective performance from a strong Reds lineup against the league leaders.

Klopp made eight changes to the side that were held by the Hammers at Anfield, with much of this week’s pre-match ire aimed at the omission of an in-form Joe Allen.

I think Joe Allen can count himself unlucky to not start tonight but anyway up the Reds!!

No idea how Milner & Lucas start ahead of the man in form Joe Allen.

Can you imagine us saying that a few months ago?

Joe Allen unfortunate not to start but given he played the full 90 vs West Ham it's not much of a surprise. #LFC

But including the impressive Roberto Firmino in an attack-minded 4-2-3-1, Klopp will have hoped for a strong display, but it was Leicester who enjoyed the best of the chances in the opening stages, with Simon Mignolet forced to claw a Shinji Okazaki header over the bar.

Great save from Simon Mignolet. Henderson caught in possession badly, Sakho beaten in the air by Okazaki. Poor stuff all round.

Strong save by Mignolet, but how about not losing the ball in midfield against the best counter-attacking team in England?

With Klopp having fielded a relatively plain attacking midfield of James Milner, Adam Lallana and Jordan Henderson, the Reds struggled to connect in the final third.

Plenty of industry. Not enough quality.

Liverpool doing lots of stuff right, just not quite working out so far.

Mignolet was drawn into action once again in the second half, making a great fingertip save to deny Mahrez.

What a fantastic save by Mignolet. I thought that was going straight in.

Great save by Migs

Mignolet actually showed up to play today for once in his lifetime ?

Liverpool had a great opportunity to punish Leicester on the counter as Firmino played in Alberto Moreno on the left, but the Spaniard skied his cross in the stands, squandering the Reds’ best move of the half.

Moreno is just so dumb

I think I just saw Moreno check in for a throw-in on the right flank. His head's gone.

With the scores level at half-time, and Leicester looking the most likely to seal victory, apathy ran through Merseyside.

This #LFC team is so one paced, there is literally nobody that can up the tempo like Gerrard in his pomp or Suarez. Pedestrian.

Our ability to create nothing from promising situations has been the only consistent thing about us this season. Moreno in particular

Despite a bright start for the Reds, Leicester‘s countercharge proved too strong, and with the ball on the bounce as the Foxes pushed forward, Jamie Vardy fired an incredible strike beyond Mignolet from 25 yards.

What a goal. Sadly.

Yes, that's what Liverpool concede. Of course it is.

If #lfc are going to lose, always make it to a goal like that.

It didn’t take long for Vardy to make it two, lifting the ball over Mignolet from close range with both Moreno and Mamadou Sakho failing to deal with Leicester‘s right-sided buildup.

Alberto Moreno was shocking in the buildup to that second Vardy goal. Legless, needs a long rest. Time for Jon Flanagan? #LFC

Cup treble it is then! Can't wait for it. #LFC

Look on the bright side – Leicester are showing how one good summer can transform everything. #LFC.

This proved to be decisive, as with the Reds’ confidence draining a buoyant King Power saw out a disappointing 2-0 defeat.

No use repeating, we all know what the problem is. Just have to hope for a fit Sturridge, Origi, Ings, and wait for the summer transfers.

I think our reserves are better than our first team…. Start Brannagan please #LFC

No class in our team. So many average players. Wasn't a bad performance, controlled the game but what's the point?

Sakho and Can are two of my favourite players but both fortunate to be starting games just now. Stinking the place out regularly.

How much money spent assembling this squad?

Worst thing of (a very bad) night was the absolute lack of fight after Leicester goal. No belief. Not fit to wear the shirt most of them.

Eggs in basket time.. Capital One Cup Final and EL knock out stages. Play the kids as much as possible cut the dead wood lose

Liverpool now turn their heads toward Saturday’s clash at home to Sunderland, a fixture that Klopp should expect his side to dominate—but on Tuesday night’s form, the Black Cats could enjoy themselves at Anfield.