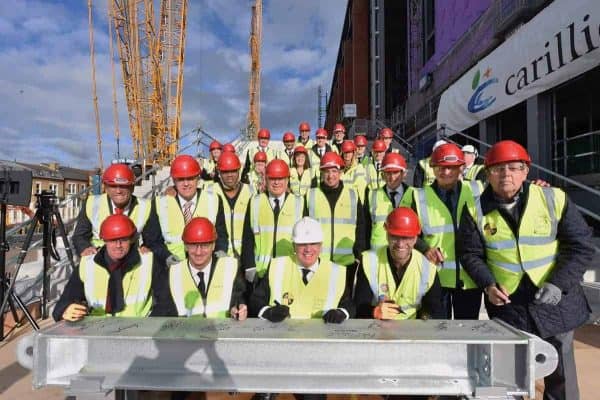 Liverpool held a ‘topping out’ ceremony for the new Main Stand on Thursday, a tradition in the construction industry to bestow good luck on a new building.

These all signed a steel girder which will then be hoisted into place atop the new roof of the stand.

The new Main Stand is due to be completed in time for next season, although Liverpool FC have now changed their wording again to say the project is “on target for completion later this year.”

We understand that some elements of the new stand, particularly internal aspects such as changing rooms and facilities, won’t be complete in time for the 2016/17.

Liverpool yesterday announced revised ticket prices for the new stand next season, meaning the most expensive seat will remain at £59 – although that price will apply no matter the opposition.

Some seats in the new upper tier of the Main Stand will cost as little as £9 – although these are believed to be restricted view seats.

Liverpool still haven’t announced naming rights for the new stand, which should generate in the region of £5 million in additional income per season.

The new stand will take Anfield’s overall capacity to just under 54,000, with phase two comprising of redeveloping the Anfield Road End – for which the club have outline planning permission but have not decided whether to go ahead with yet. That would see the overall capacity rise to 58,000.

Carragher posted a photo on Instagram from the top of the new stand, commenting how small Goodison Park looks across Stanley Park:

Goodison looks small from the top of the new LFC stand!!