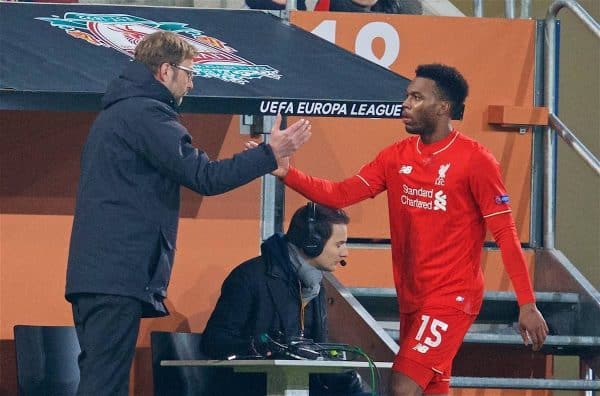 “Sloppiness and sluggishness” – How the media reacted to Augsburg stalemate

Following Liverpool’s goalless Europa League Round of 32 first leg against Augsburg, we round up the best media reaction from the WWK Arena stalemate.

The first ever meeting between the two clubs ended in a night of mixed feeling for Jurgen Klopp’s Liverpool.

The German watched his side produce a flat display and pass up an ideal chance to move into a commanding position in the tie, but also return home with a great chance of sealing qualification in Anfield’s return.

It could have been different and had Daniel Sturridge slotted home James Milner’s low cross or Kolo Toure connected with Alberto Moreno’s teasing free-kick to give the Reds what would have been an invaluable victory.

But with Simon Mignolet saving well from Alexander Esswein and Ji Dong Won hitting the Belgian’s post late on, a draw was a fair result, setting up a tense second leg just three days before the League Cup final.

Reporters were quick to point out it was a night that didn’t go according to plan for Klopp and his side, who now face the tricky task of securing progression 72 hours before kicking off the League Cup final against Man City.

Paul Joyce of the Express wrote:

Liverpool’s hopes progressing in the Europa League did not suffer a setback as such, but neither did the plan of asking their strongest side to eke out a first-leg advantage play out as expected.

Many of those hoping to have a night off at Anfield next Thursday – just 72 hours before the Capital One Cup final with Manchester City – will find themselves needing to be stripped for duty now after a scrappy stalemate.

The ambition was for Liverpool to take care of Augsburg at the first attempt, making the second leg of their round of 32 meeting a formality next Thursday. Klopp could then rest key players before the small matter of the Capital One Cup final 72 hours later.

Klopp may have been given a giant pretzel by Augsburg, which he munched through during his press conference, but that was the only gift Liverpool received. A 0-0 draw makes things complicated in more ways than one, particularly with Manchester City looming on the horizon.

On the subject, The Telegraph’s Chris Bascombe had to say:

The only manager delighted after Liverpool’s tame draw in Augsburg is Manuel Pellegrini.

Instead, a tame goalless draw ensures there is no possibility of Liverpool’s key players being preserved for Wembley in a week’s time. While Manchester City are returning from Kiev, Liverpool’s will be attempting to secure a place in the last 16 of the Europa League.

In his post-match assessment for ESPN, Steven Kelly noted:

Perhaps there was too much pre-match talk about how Liverpool could clinch the tie in this opening leg, thus being able to rest key players for an Anfield return days before their Capital One Cup final with Manchester City.

A complacent and sloppy first half display was at least improved upon in the second and a scoreless draw away from home is a decent, if unspectacular result. But still, it felt like an opportunity wasted.

Bascombe expressed on this:

After the flood at Villa Park on Sunday came the drought in the Augsburg Arena. Liverpool lacked conviction and courage in possession, so often working themselves into encouraging positions to no avail.

Daniel Sturridge squandered the most inviting chance just after half-time – the only move of slickness all night – but he could not connect from close range. Sturridge played for just over an hour and there were a couple of encouraging interplays with Philippe Coutinho and Roberto Firmino. Overall, it was disappointing.

The occasion demanded Liverpool showcase their finesse in the final third, but Daniel Sturridge, starting his first back-to-back games for 11 months, was forced to feed on scraps.

Roberto Firmino did not see enough of the ball and Augsburg right-back Paul Verhaegh continually cramped Philippe Coutinho, who was stationed on the left, for space to stifle his creative spark and render him peripheral.

Liverpool did have their moments before the interval without seriously troubling Marwin Hitz in the Augsburg goal. The visitors were far too static in the final third but as their movement improved in the second half so, predictably enough, did their threat.

As per the Irish Examiner, Carl Markham noted:

Augsburg are just one point above the Bundesliga’s relegation zone and their limitations – and intent – were quite apparent but Liverpool struggled to break them down.

However, King focussed on the home side’s hardworking display as they proved more than a match for Klopp’s team:

Augsburg’s determination to slow the pace of the game down left Liverpool frustrated on a bitterly cold night and the only other chances they had before the interval were a shot from Jordan Henderson from 25 yards and a scuttling effort from Sturridge, both of which Hitz gathered easily.

But this was not just a defensive performance from a side that are currently 14th in the Bundesliga and only a point above the relegation zone; they made Liverpool’s defenders work and even shrugged off the disappointment of losing main striker Raul Bobadilla to an early injury.

A lack of creativity and execution from Liverpool’s lacklustre midfield – not for the first time – also drew criticism, as those in support did little to help spark the blunt attack to life.

On this Bascombe said:

Sloppiness and sluggishness on the ball undermined hopes that Liverpool’s attacking trio would again wreak havoc. Too often Sturridge and Firmino’s movement created openings that demanded a penetrating pass, only for midfielders to select the safer option as Augsburg retreated.

As a consequence, Liverpool’s limitations were exposed with neither Jordan Henderson nor Emre Can able to exert enough control in midfield during an opening half high on perspiration but low on inspiration.

And The Mirror’s David Maddock focussed on a flat night from Emre Can in particular in this regard:

The German midfielder has a big reputation in his homeland, and is already a full international and also fully established in the Germany squad

But there are still question marks about his consistency in delivering on what is an obvious talent.

He can pass with incision, and he can run from the middle too, but we don’t yet see those qualities anywhere near often enough.

Liverpool certainly have it all to do at Anfield next week.