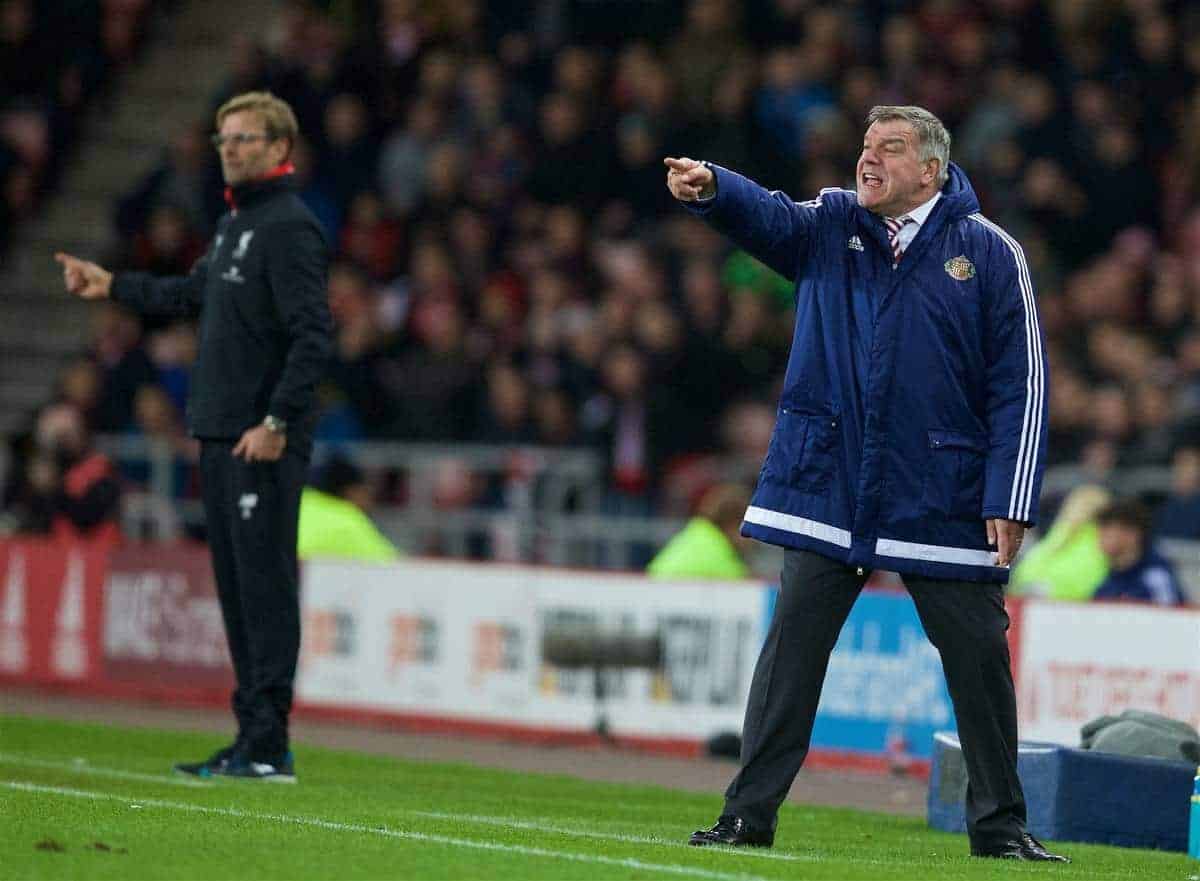 Liverpool host struggling Sunderland on Saturday afternoon, as the Reds seek to return to winning ways after defeat to Leicester in midweek.

Jurgen Klopp’s side begin their search to salvage some pride after recent poor results officially ended any hope of a positive 2015/16 Premier League campaign transpiring.

That the league season is effectively over with 14 games left to play is hugely disappointing, making tasting cup glory the priority for the Reds, who could finish Saturday’s game in an empty Anfield with a mass walk out planned for the 77th minute in protest at the forthcoming and outrageous ticket increases.

Though there’s little left to play for in the league, results and performances are still important to build confidence for the cup competitions, and also with the squad needing to prove they can be part of Klopp’s Anfield revolution, despite showing anything but recently.

The Mackems at Anfield

The Reds have enjoyed much the better of this fixture, and look to continue the dominance on Saturday by posting just their second league win of 2016.

Liverpool have lost only one of the last 12 meetings between the clubs, alongside being unbeaten at Anfield against the Mackems in 33 years, last suffering defeat in 1983.

Last season’s corresponding fixture saw a goalless bore draw played out at Anfield as the Reds added to their recent indifferent home results against the Black Cats, with a third stalemate in the last five Merseyside meetings.

The most recent clash just over a month ago saw Christian Benteke net a successive match winning goal to hand Klopp’s men a 1-0 win, in a battling but unconvincing performance.

Against a physical Sunderland side, Klopp will hope for a repeat this weekend.

Both sides come into the clash following defeats against the top two, and looking to respond positively at the first attempt.

But after five straight defeats, Allardyce’s men have picked up a steady seven points from the last 15 available, though that is the lowest amassed by any club in the league over the last 10 games.

The Mackem’s have also conceded the most goals in the division away from home and in total, lost the joint-highest amount of games and arrive winless in their last three.

Positive form and consistency continues to evade Klopp’s Reds, who have won three, drawn two and lost five of their last 10 games.

Only the bottom three clubs and Bournemouth have won fewer home games than Liverpool, and the Reds look for a first Merseyside win since Boxing Day.

An immediate return to winning ways for Klopp’s Liverpool is priced at 4/9 with a draw at 15/4 and a vital three points for Allardyce’s relegation battling side at a hefty 8/1.

Allardyce arrives with a strong squad available for clash, with only long term absentees Adam Matthews and Sebastian Larsson missing.

Jeremain Lens is a doubt with a groin problem, but Yann M’Vila is set to recover in time from a foot injury to feature and Younes Kaboul is in contention to return after over a month out.

The Wearside boss could start the same side that narrowly lost to City in midweek which featured new signing Lamine Kone, while fellow January arrival, Whabi Khazri, is pushing for a start after coming on at half time of the loss.

Dame N’Doye and Adam Johnson, who also both entered as substitutes, will hope for a place in Allardyce’s XI, as will Fabio Borini, who is in line to make his first Anfield return since leaving the Reds permanently.

A physical battle awaits Klopp’s side, and they will have to move the ball much more quickly than in midweek with more support in the final third needed to expose the Premier League’s leakiest defence.

Klopp dismissed Daniel Sturridge speculation and talked injuries and striking back in his pre-match press conference:

“There’s absolutely nothing to say about it. Why should I think about that? Daniel is back in training and that’s great.”

“Divock [Origi], Phil [Coutinho] and Daniel [Sturridge] are back in training. Another three sessions and they are available for West Ham if nothing happens.”

“We have to do better because we were not satisfied with our performance against Leicester. We have to strike back.”

Prior to the Merseyside trip, Allardyce said:

“[Klopp] is finding his feet. I’m sure he’ll have his own ideas on how he wants to shape the team in the summer and I think he’s doing the best he possibly can to get results and get through this season.

“He’s obviously a great character which is what we all love to see at our level of football.”

For the second game running the match won’t be broadcast live in the UK, but can be found on channels such as Fox Sports, Star Sports 4, Canal+ Sport and SuperSport 3 around the world.