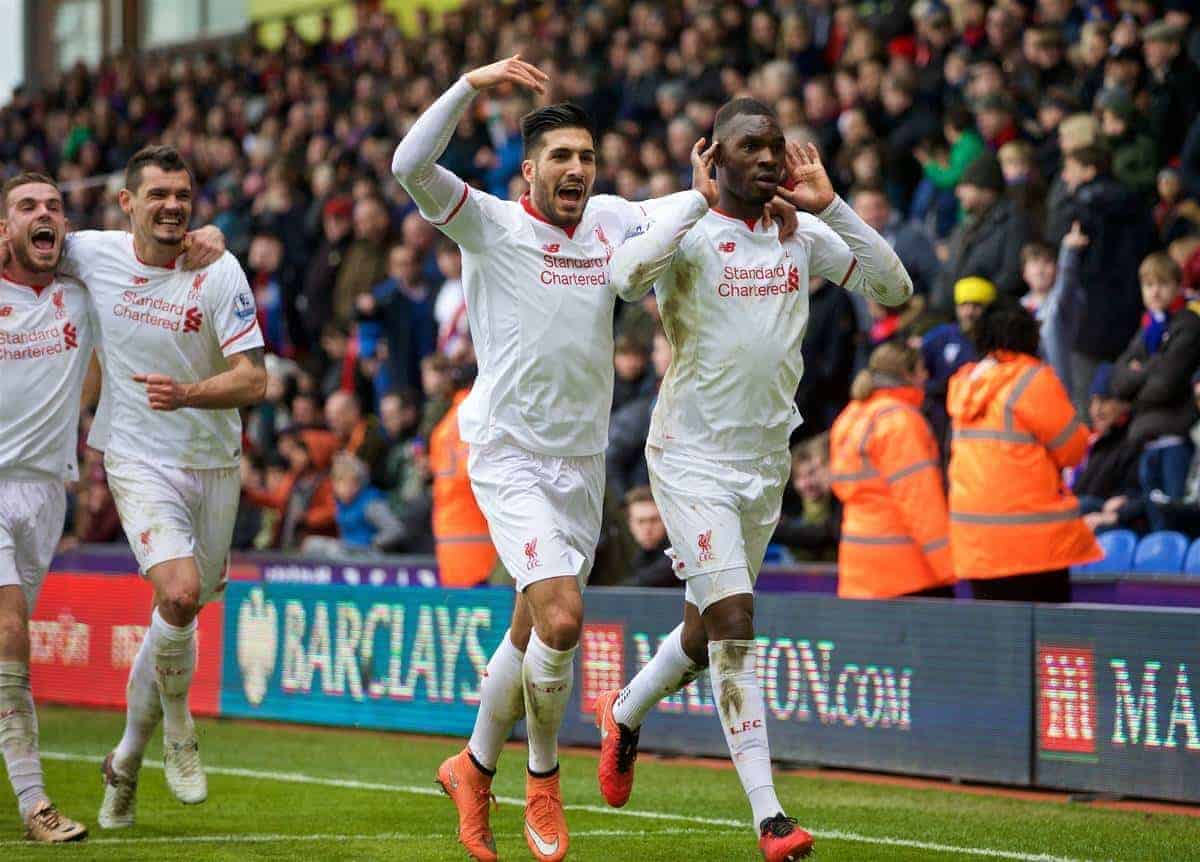 Following a poor start and a sending off, Liverpool recovered to snatch a last minute victory against bogey side Crystal Palace. Klopp’s men came back from 1-0 down to claim all three points in a thrilling finale at Selhurst Park.

Made a good save from Yannick Bolasie early in the game. Had to be brave and make himself big to stop the shot from close range. Was called upon again shortly after to make a save at his near post from Emanuel Adebayor.

Also caught several high balls and released the ball quicker than usual. Probably the best Reds’ player in the first half.

Did well to get in front of Adebayor to prevent a goal-scoring opportunity for the Togolese in the first-half.

Very hit and miss with his crossing in attack and as a result was brought off in the second half when the team needed a goal.

Not the best display for the full-back as he continues his comeback.

Caught out for pace on the odd occasion when up against Bolasie and, more worryingly, Adebayor, but made a couple of excellent interventions towards the end of the first half as Palace slung balls into the box.

The Croatian only lost one of his seven aerial duels throughout the game and grew into a commanding presence at the back as the game went on.

He looked less comfortable when shifted out to right centre-back following Milner’s sending off, but this was a case of needs must and he put in plenty of effort, making one superb challenge on Souare late on.

Covered well for Lovren when his centre-back partner was struggling for pace against the likes of Adebayor and Bolasie.

Palace realised early on that they weren’t getting much joy from Sakho, and the speed of Moreno on the left, so quickly shifted to the other side. But Sakho followed them across, making five defensive blocks throughout the game.

The Spaniard’s pace was useful against Wilfried Zaha, and he also showed some strength to hold off the English winger at one point in the second half.

Unlucky not to score with a well hit shot in the second half, as the ball struck the inside of the post and somehow rebounded clear.

Needs to be slightly more composed generally, but he coped well with a difficult assignment today and could so easily have got himself on the score-sheet on another day.

Picked up a booking in the first half which meant Flanagan didn’t need to, ensuring that the full-back didn’t have to face Bolasie on a booking for the rest of the game.

Was otherwise unimpressive and will need to improve on this display to remain in the side for future fixtures.

A poor touch wasted a good opportunity to release Origi on the counter-attack towards the end of the first-half but the German was generally a solid presence in the midfield and his influence grew as the game progressed.

He dropped back into the centre of defence following the sending off, and provided a ball-playing platform at the back from which the team could build, before moving back into midfield when Kolo Toure came on for the vital last few minutes.

The leader in the engine room of the side.

The vice-captain showed a complete lack of responsibility by picking up two needless bookings.

The second of these came during a crucial period of the second half when his side had just made an attacking substitution and were looking to get back into the game.

Aside from a free-kick which deflected over off the wall in the first half, and some hard running, the number seven offered little before being shown the exit by Andre Marriner.

A nice cushioned header set up the aforementioned counter-attack which Can spurned.

Despite floating in and out of the game he still looked like the attacking player most likely to make something happen.

He did so when Palace keeper Alex McCarthy presented Liverpool with a chance, and the Brazilian slotted the ball into the goal to continue his excellent contribution to the side in 2016.

Ran hard and even looked a touch quicker than usual. Neat and tidy with his passing and link-up play, notching up a pass success of over 91%.

Retained his place in the side following a good display against Manchester City in the week, and showed he can be a useful squad player.

Did a good job as the lone striker just in front of Firmino, but didn’t quite have the cutting edge.

Ran well into the channels, linked up play, and held the ball up, but also gave the ball away which led to chance for Cabaye in the first-half.

Provided some balance and composure to the attack. On the ball lots as the Reds somehow found space in midfield despite being down a man.

Almost scored with his first touch after coming on, but his shot went straight at McCarthy.

Won a penalty in the final minutes of the game as Damien Delaney clipped him as he drove into the box. Took the penalty himself, showing great composure to pause and wait for McCarthy to dive before slotting the ball in the empty corner.

Ultimately won the game for his side from the bench. A big boost for his confidence.

Slotted in at centre back late in the game, allowing Emre Can to move further forward.

Klopp’s starting eleven struggled to make an impact, but the manager made some clever – and brave – changes after his side went down to ten men, and the team were stronger after Milner’s dismissal thanks to these.

The introduction of Coutinho in the second half had a controlling impact further forward, and his second substitute – Benteke – almost scored with his first touch, before going on to win the game.

Liverpool look a lot more disciplined in recent weeks using a system which is somewhere between 4-2-3-1 and 4-4-1-1, and the manager’s work on the training ground is beginning to show.

Opted for 3-4-2 when down to 10 men and snatched a victory from the jaws of defeat against the odds.