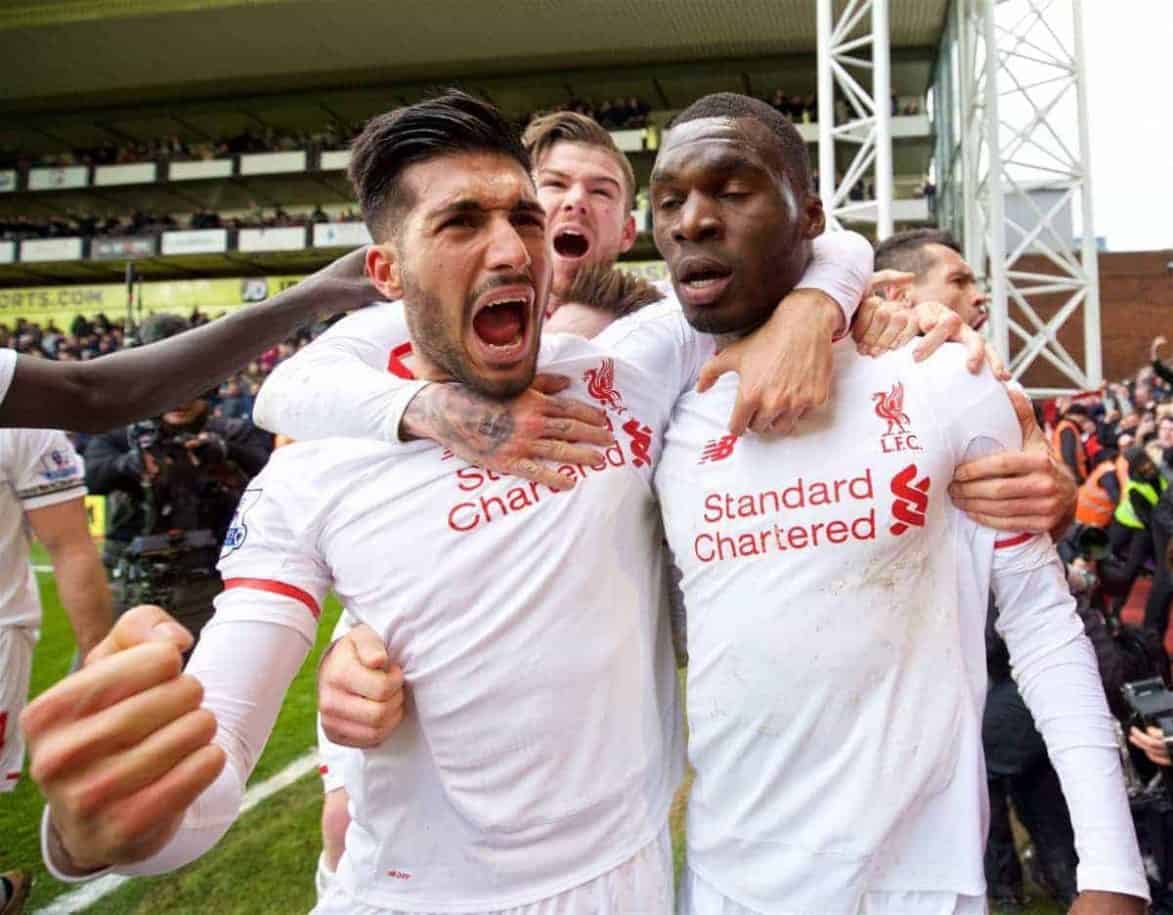 Emre Can was at his commanding best in the Reds’ 2-1 win at Crystal Palace on Sunday, leading Liverpool especially when down to 10 men.

Sometimes it’s easy to forget that Can only turned 22 in January – he’s younger than Kevin Stewart and Joao Teixeira, and just a year older than Jordon Ibe.

In a Liverpool squad littered with players who seem to divide opinion, the young midfielder is one who stands out most in that respect.

To some – increasingly the majority – he is a footballer of enormous potential who will go on to become a world-class player. To others, he is overrated and not the future of Liverpool’s midfield.

While Can has been a little inconsistent in a Reds shirt since his arrival from Bayer Leverkusen almost two years ago, he is now undisputedly a key player under Jurgen Klopp.

Against Palace, the 22-year-old produced a performance of real substance, as has been the case for a number of weeks now.

Can appears to be maturing by the game, whether it be in his decision-making on the ball, reading of play or general leadership, and he was the standout midfielder on either team at Selhurst Park. Particularly the leadership.

Jordan Henderson may be Liverpool’s captain, but there was only one Reds midfielder who led by example on what is a bogey ground for the Reds. Where Henderson appears to be struggling, perhaps with that heel injury hampering him, Can keeps improving.

Can was physically commanding, biting into tackles and shrugging opponents off the ball, and won an astonishing 93 per cent of his duels. Considering the 54 per cent he has won throughout the season is a decent enough statistic in itself, that shows just how commanding Can was in south London.

Although it was the defensive aspects of his game that shone brightest – five defensive actions – his attacking prowess was also evident.

When the German gets into his stride, as he did a few times, he is almost impossible to stop. Mile Jedinak, Joe Ledley and Yohan Cabaye looked powerless to prevent him striding forward.

Like Steven Gerrard in his prime, he breezes past opponents and it takes something pretty special to knock him off the ball.

Of course, Can has a long way to go before he reaches something close to Gerrard’s level, but the signs are extremely promising. When James Milner needlessly received a second yellow card in the second-half, with Klopp’s men already 1-0 down, Liverpool looked doomed.

Can was taken out of midfield and used at centre-back – a role he struggled with at times last season, but shone as the centre of a three, able to step out of defence and into midfield.

His passing was crisp and thoughtful, his positional sense was strong and he brought drive from the back that helped the Reds boss their numerically superior opponents.

In times of adversity, some players shy away and others rise to the challenge. Can showed that he falls very much into the latter category.

Emre Can is our best player by the way. Future captain. Future leader. Future legend.

Emre Can exceptional too. Turning into a real leader.

Liverpool have been criticised for lacking character, nastiness and an all-round winning mentality in recent years, but the German seems to have the assets we crave.

When Christian Benteke wheeled away to celebrate, having tucked away his last-gasp penalty, Can was the first to embrace the striker.

The majority of the players revelled in embracing with the travelling supporters, but none looked more genuinely delighted and pumped up than their marauding midfielder/centre-back.

The win meant the world to him, and had it not been for his man of the match display, Liverpool would likely have succumbed to a physical, pesky Palace side.

It is never easy to predict the career trajectory of a young player, but barring serious injury, it seems impossible for Can not to have an enormous future in front of him for both club and country.

He is not perfect just yet, and will have some bad days at the office – after all, he’s still young – but we are seeing an increasingly complete footballer these days.

Can is years from the peak of his powers, yet he is now already becoming one of the first names on Klopp’s team-sheet.

He’s made more appearances than any other outfield player this season, again showing his importance to the team, and is now profiting from being played in his favoured position every match. He’s started 37 of the Reds’ 46 games in all competitions – impressive for somebody so young.

Emre Can my man of the match…

There are plenty who doubt over Henderson’s credentials as Liverpool’s long-term captain, and his midfield partner is becoming an increasingly influential player who Klopp could turn to should he change the armband next season.

Like Gerrard at 22, Can virtually has the lot. He’s tall, strong, powerful, skilful, creative, a leader – and appears to thrive in tough situations.

He showcased all of these key talents in Liverpool’s last-gasp win over Palace, following up his impressive showing against Man City days earlier.

Carry on like this, and the Reds are going to have a world-class midfielder in their ranks. Perhaps the question will become who partners him, this summer could be telling.