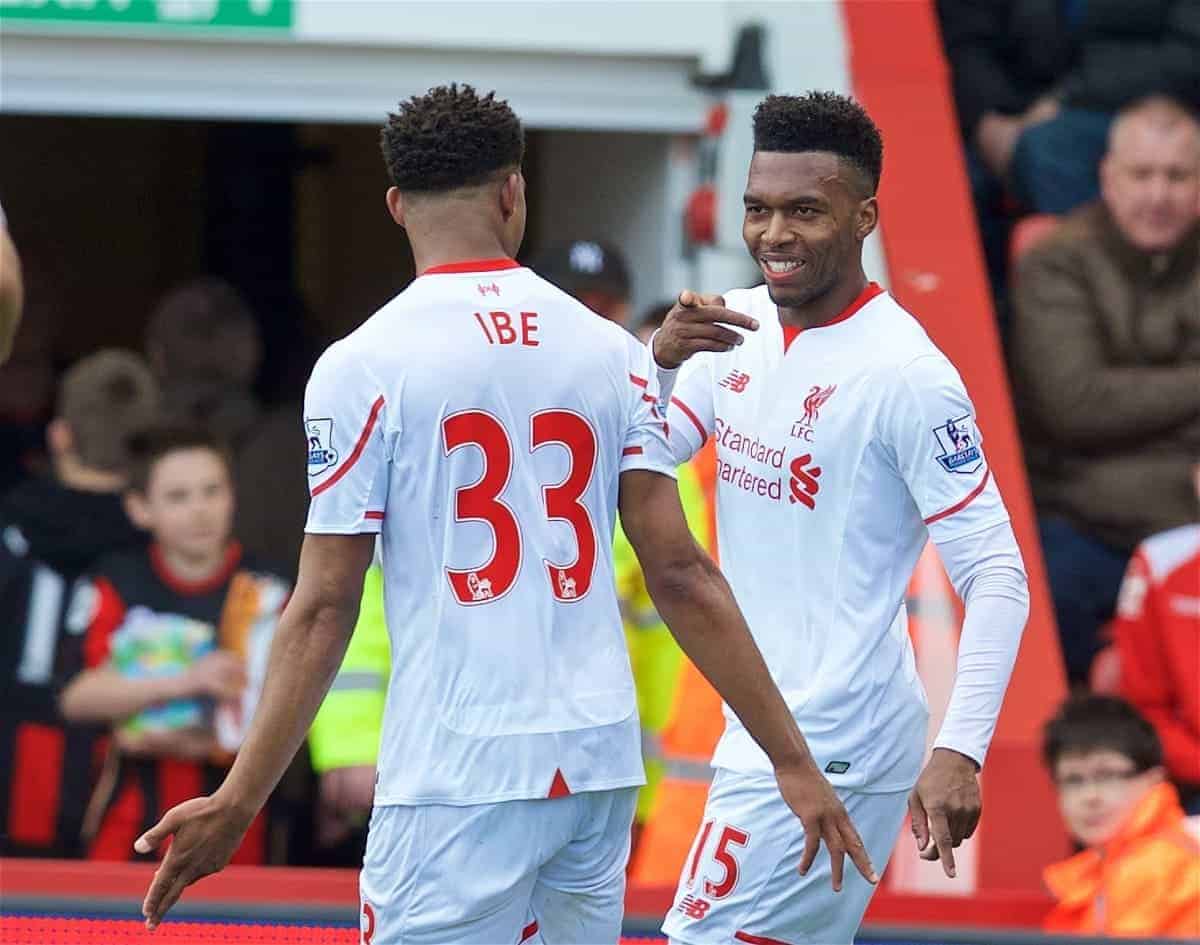 Liverpool won 2-1 at Bournemouth on Sunday afternoon, with first-half goals from Roberto Firmino and Daniel Sturridge the difference between the two sides.

In terms of personnel, Jurgen Klopp‘s side was unrecognisable to the one that beat Borussia Dortmund so dramatically on Thursday evening.

Firmino was the only player to retain his place in the starting eleven, with Klopp understandably keen to rest key men.

Danny Ward made his Liverpool debut in place of Simon Mignolet, while Connor Randall earned his maiden Premier League start at right back.

Captain on the day Lucas Leiva partnered Kolo Toure at centre-back, Brad Smith made his first league start at left-back and Kevin Stewart started for a second league game in a row, alongside Joe Allen in midfield.

Jordon Ibe and Sheyi Ojo began proceedings on either flank, with Sturridge leading the line for a much-changed Liverpool.

A win was needed for the Reds at Dean Court, if their already slim hopes of finishing in the top-four were to remain in tact.

Sturridge fired an early shot straight at Artur Boruc, while at the other end, Steve Cook sent a header looping over the crossbar.

Liverpool were fairly dominant in the opening exchanges, but it felt like a rather low-key, end-of-season affair. Almost no chances of note were created in the first 20 minutes.

Tommy Elphick’s header was straight at Ward, which once again exposed the Reds’ set-piece frailties, while great feet from Ojo almost lead to a Liverpool opener. Connor Randall shot straight at Boruc in the melee.

Sturridge almost pounced from close-range, but was again denied by the Bournemouth goalkeeper. It was still only a half chance though, in truth. Ward showing one good piece of handling from a cross, which was encouraging.

In the 41st minute, Liverpool were ahead. A sublime attempt at a back-heeled finish from Sturridge was kept out by Boruc, but Firmino was on-hand to open the scoring.

Sturridge then doubled the lead seconds before half-time, with the 26-year-old burying a clinical header into the bottom corner.

It was cruise control for Liverpool, as the two sides left the pitch at the interval. Lewis Grabban replaced Junior Stanislas at half-time, but Klopp made no changes to his side. A repeat of the capitulation at Southampton last month, also on the south coast, was very much unwanted.

Firmino missed a great chance to get his second of the afternoon almost immediately after the restart, but lashed his effort wide of the target.

Sturridge then hit the post with a typically delicate finish, as Liverpool looked to completely put the game to bed at Dean Court.

Firmino’s curled effort was comfortably kept out by Boruc just before the hour mark, but Bournemouth began to enjoy plenty of possession.

Josh King shot straight at the impressive Ward, and it began to feel as though one goal for the hosts would make things very interesting.

Mamadou Sakho replaced Toure midway through the second-half, with the Ivorian clutching his hamstring as he left the field.

The Frenchman was immediately tested by King, but he denied the Bournemouth striker, along with Ward. Matt Ritchie then headed wide.

Divock Origi came on for the lively Sturridge with 15 minutes remaining, while Eddie Howe brought on Callum Wilson for Ritchie. Adam Lallana replaced Ibe soon after.

Grabban twice threatened to pull a goal back for Bournemouth, but Ward thwarted the substitute on both occasions. Sturridge again hit the post at the other end.

King pulled a goal back in stoppage time, and Cook then headed over, but Liverpool saw out the game in the end.

Klopp’s men registered three more valuable points, and move up to level on points with 7th-placed Southampton – with two games in hand.

Up next: The Reds take on Everton at Anfield on Wednesday ((8pm GMT), in what is the 226th Merseyside derby, before they host Rafa Benitez’s Newcastle side on Saturday (3pm).