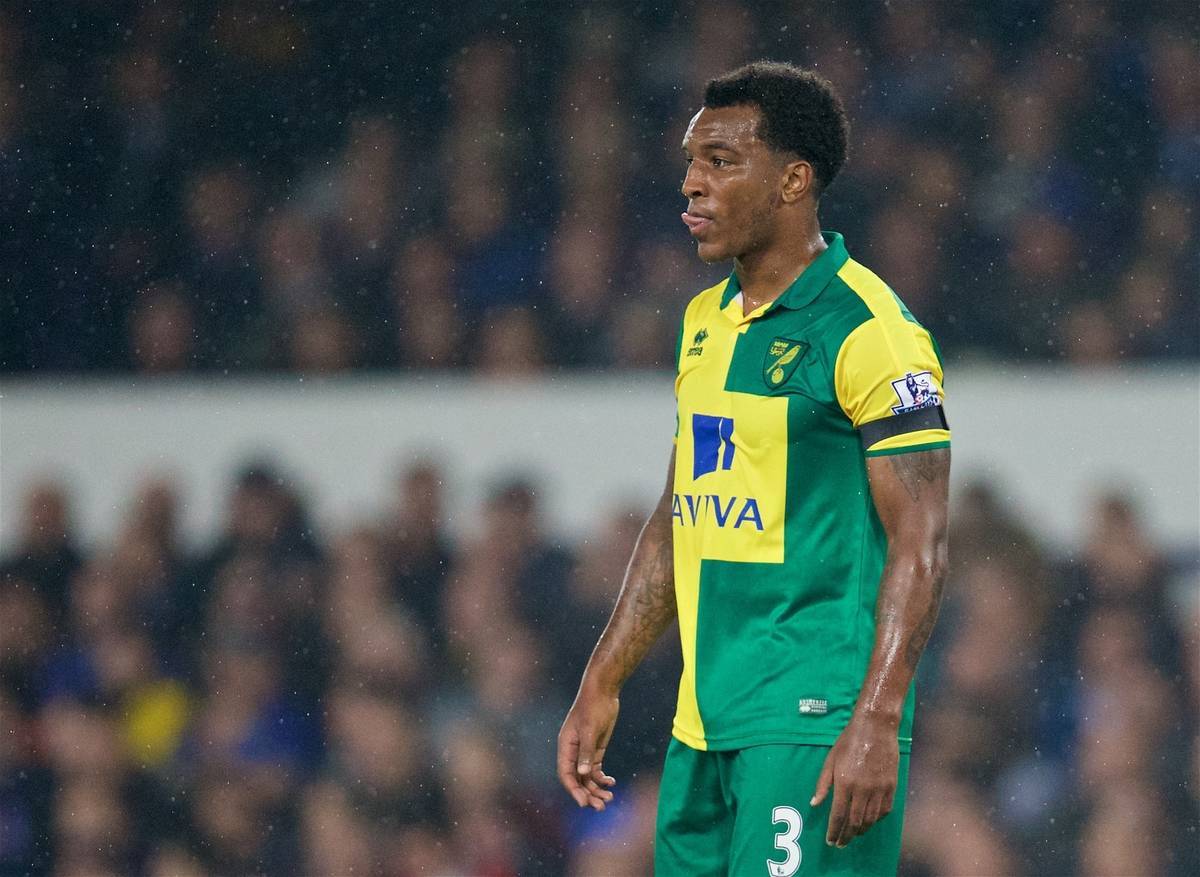 Continuing our end-of-season reports on Liverpool’s loaned men, we take a look at how Andre Wisdom’s season with relegated Norwich panned out.

Wisdom looked set for a role in the first-team squad at Anfield this season after signing a new long-term contract in the summer.

But despite committing his future to the Reds, the defender instantly headed to Carrow Road for the season to join up with Alex Neil’s newly promoted Canaries.

Disappointingly, it proved a move that failed to benefit either Norwich, Liverpool or Wisdom himself, with the 23-year-old enduring an extremely unproductive season in East Anglia.

In our mid-season look at Wisdom’s first half of the campaign, City fan Gary Gowers labelled his opening period “a little underwhelming.”

Fortunes failed to improve thereafter for the former West Brom loanee, who endured an even more unproductive second half to the season, making for an extremely disappointing season.

Having featured just 10 times in all competitions up until January, he found game time even harder to come by from that point on, failing to impress enough in his outings at right-back – or briefly at right wing-back – to hold down a regular place.

A lengthy injury spell certainly did not help, but questions over how much he would have played remain anyway, with Neil moving to sign right-back Ivo Pinto in January – an arrival that would have dented Wisdom’s hope of a better ending than start.

Wisdom featured just four more times for Neil’s men, enduring a three month period without a single first-team appearance due to a knee problem – from starting against Man City in the FA Cup in January to returning for three final league games in April.

Positively he started those three games in a row on his return before injury interrupted again, but, perhaps understandably, he failed to impress playing in a back four that conceded six goals.

Wisdom’s uninspiring performances, coupled with the feeling of the Norwich faithful Gowers alluded to that he failed immerse himself into the club, resulted in fans struggling to warm to the defender.

The consensus here being that Wisdom had little care other than using Norwich as a stepping stone to an extended Anfield future – a reason in Gowers’ view behind his early struggles.

Wisdom made a premature return to Merseyside due to injury in his final outing – a 3-0 defeat to Sunderland – compounding a poor season at Norwich, who went on to suffer relegation to the Championship.

In total, Wisdom appeared 14 times for the Canaries, making 10 Premier League appearances and claiming one assist in the League Cup, while also featuring twice for the club’s under-21s.

He created four chances from right-back in those league games, winning 60% of his duels alongside posting a lowly 77% passing accuracy – a success rate lower than all of the Reds usual first-team defenders this season.

It’s a season’s work that is unlikely to see him handed the chance of the extended Anfield stay he hopes for.

Speaking in December on his future, Wisdom said: “My future is definitely back at Liverpool because that is my dream and that is what I want to achieve” before revealing Jurgen Klopp encouraged him to get as much experience as he can and enjoy his football.

But having failed to impress at a lower Premier League club for the second year running, Wisdom’s dream should be just that, with it clear that he no longer has a future in L4.

Liverpool struggled for defensive cover throughout the season, especially at full-back, but failing to nail down a role in his preferred centre-back position or at right-back in a second unimpressive top-flight loan gives Klopp no reason for optimism.

Even a strong pre-season showing is unlikely to be enough to convince he can play a role going forward, with the defender’s unambitious style of play jarring with Klopp’s exciting and energetic team – something Gowers assessed with his reluctance to “join in.”

As he prepares for his first full season in charge and having seen his side ship 50 goals in the league alone, Klopp is almost certain to bolster his defensive department this summer.

And with some of the current options likely to be relegated down the pecking order and others like Jon Flanagan, Connor Randall and Brad Smith chosen back-up alternatives, it is hard to see a place for the former Bradford City youth trainee in the squad.

Despite signing a new ‘long-term’ contract only a year ago, Wisdom would be wise to now seek a move elsewhere with his chances of forcing his way into Klopp’s plans almost non-existent – even if to a club in the Championship, like Derby perhaps, where he enjoyed his best spell of first-team football three years ago.

Dropping a level and starting afresh to kick-start a stagnating career may also finally see the 23-year-old afforded the chance to play in his natural centre-back position that loan managers have been reluctant to deploy him in.

Regardless of whether a Premier League or Championship club is willing to secure his services, it is undoubtedly time for Liverpool and Wisdom to part ways.