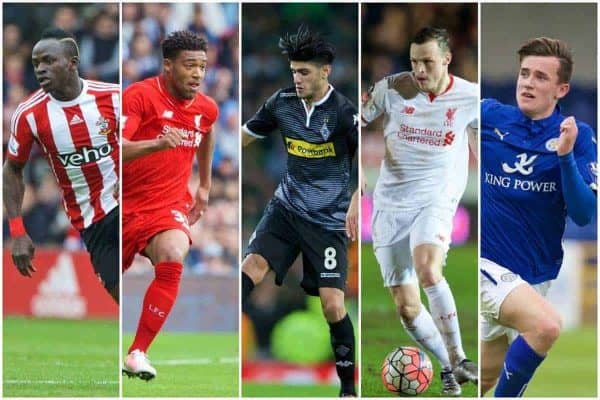 We round up the latest Liverpool transfer news following another major story in Jurgen Klopp‘s summer plans.

After four months off between leaving Borussia Dortmund and joining the Reds in October, Klopp is unlikely to take too many breaks throughout the summer.

The German has already detailed a rigorous pre-season training schedule, boosted by the impending arrivals of two former Bayern Munich staff members, and he is set to add further to his playing personnel, too.

Joining Loris Karius, Joel Matip and Marko Grujic are likely to be a host of other new faces, with one surprise target emerging on Thursday night in Southampton‘s Sadio Mane.

Here is the latest Liverpool transfer news, including the latest of Klopp’s pursuit of Mane.

With Gotze moving to commit his future to Bayern Munich this week, Klopp has reportedly turned his attention to another attacking target in Senegalese forward Mane.

Though the German is said to retain an interest in his former Dortmund star, he won’t stand still as he looks to add to his targets early this summer.

This could see the Reds vie with Tottenham Hotspur and Man United in the battle to sign £20 million-rated Mane, who ended 2015/16 as Southampton‘s top goalscorer, with 15 goals in 43 games.

According to the Telegraph‘s Chris Bascombe, Klopp would need to employ his “powers of persuasion” to entice Mane to Anfield, with the Saints having qualified for next season’s Europa League at his side’s expense.

Whether this is another move in the power play between Klopp, Gotze and Bayern remains to be seen.

If Liverpool do move for Mane, their current right-sided option, Jordon Ibe, could play a part in negotiations, with the 20-year-old said to be on Southampton‘s radar this summer.

Ibe finds himself in a difficult situation this summer, having fallen behind in Klopp’s plans in 2015/16, and could look to move on to further his development with regular first-team football.

However, while the Saints and Watford were both reported to be pursuing the winger on Wednesday, reports in the Mail on Thursday night claim that Liverpool are not looking to sell this summer.

However, as the report continues, it is revealed that “Premier League clubs have been approached by agents offering the player for sale.”

Represented by his parents, it is unlikely this comes from Ibe’s side, suggesting that the Reds are quietly touting their young talent ahead of a possible sale.

Reds to Go “All Out” for Dahoud

With Borussia Monchengladbach youngster Mahmoud Dahoud reported to have moved ahead of Piotr Zielinski in Klopp’s list of midfield targets, it seems likely that it will be one or the other this summer.

Gladbach have maintained their stance that Dahoud is not for sale, but Liverpool are joined by Spurs and Dortmund in the pursuit of the Syrian-born dynamo.

According to Goal’s Melissa Reddy, Klopp is looking to go “all out” to sign Dahoud, who is valued at £20 million.

Liverpool’s need for another high-quality midfield option is clear, though with Gladbach said to be planning around Dahoud for next season, moving him forward to the No. 10 role with summer targets Sebastian Rode and Christoph Kramer in support, whether he will leave is unclear.

If a deal is made, however, Dahoud’s arrival would likely spell the end of Joe Allen’s Liverpool career, with the Welshman admitting Klopp’s “pre-season plans” would decide his future.

Brad Smith served up one of the success stories of 2015/16, coming back from contract purgatory to earn a new deal following Klopp’s arrival, going on to make 10 first-team appearances.

But without European football next season, and with Klopp exploring his options at left-back, Smith has admitted he is open to leaving the club on loan in search of regular football.

“Hopefully [I’ll] do well at pre-season and stay at the club,” he told FourFourTwo.

“But if not, [I’ll] speak to the manager and if he wants me to go out on loan and get experience. I’m happy to do that as well.”

Smith was largely utilised in cup competitions and rotated lineups, so it is likely he could move on in a temporary deal in 2016/17.

Smith could find himself replaced by another young left-back in Leicester City‘s U21 Player of the Year, Ben Chilwell.

Chilwell suffered injury in the England U21s’ 4-0 win over Paraguay on Wednesday night, forcing the 19-year-old to pull out of Gareth Southgate’s squad for the Toulon Tournament.

But this hasn’t deterred Klopp in his pursuit of the former Huddersfield Town loanee, who comes with a strong recommendation from the German’s close friend, Terriers manager David Wagner.

According to the Mail, Liverpool will “test Leicester‘s resolve” with a £4 million bid for Chilwell before the end of the week.

This is in line with the Reds’ plan for swift business this summer, and Chilwell seems to be Klopp’s priority target at left-back, with the club moving to deny speculation linking them with Lorient’s Raphael Guerreiro.