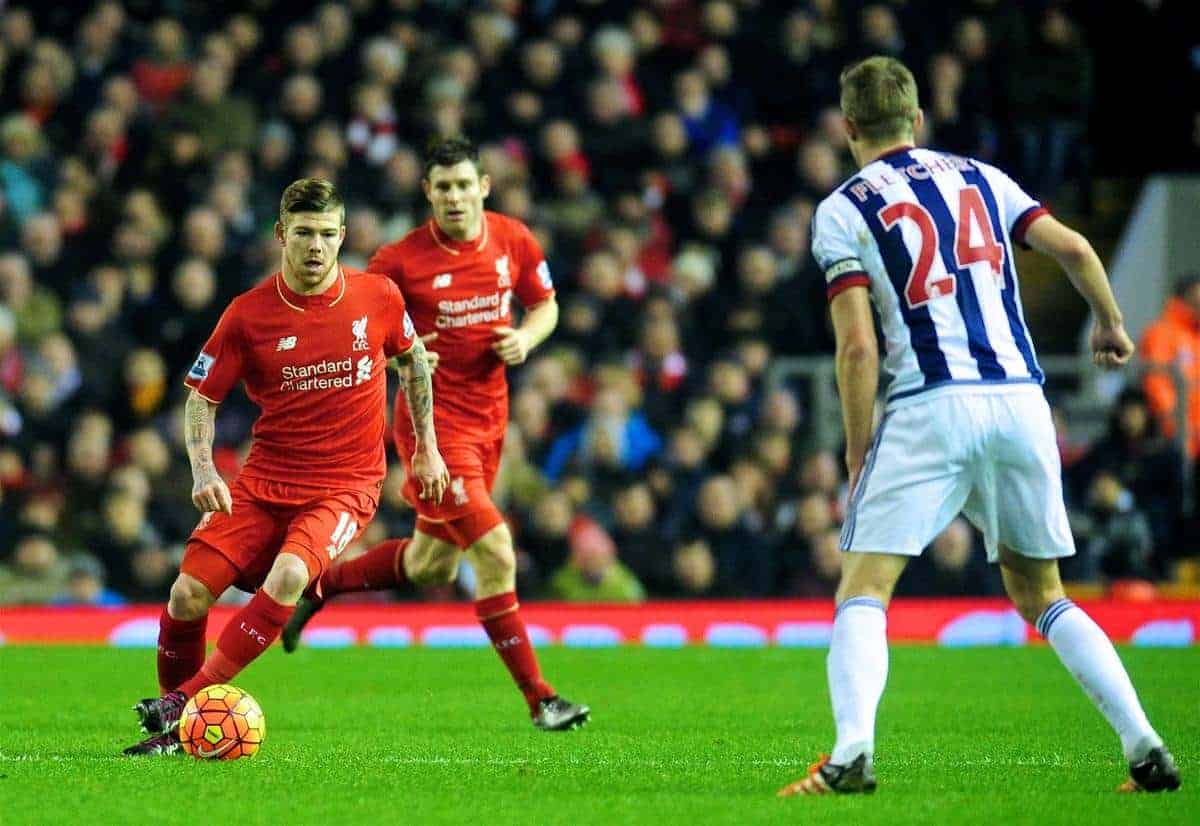 Liverpool visit West Brom on Sunday afternoon, as the Reds aim to end their 2015/16 Premier League season in style.

Liverpool drew 1-1 at home to Chelsea on Wednesday evening, as Jurgen Klopp‘s side signed off at Anfield for another year.

Christian Benteke’s last-gasp header cancelled out a superb opener from Eden Hazard, and in the end, a draw was probably fair.

This weekend’s trip to West Brom very much plays second fiddle to the Europa League final against Sevilla next Wednesday, with plenty of changes expected.

The Reds will want to go out on a high in the Premier League, however, and fringe players will be given the chance to show they are worthy of remaining at the club beyond the summer.

It has been difficult to gauge Liverpool’s league form, because of the countless alterations Klopp has made in recent weeks.

Points have been dropped against Newcastle, Swansea and Chelsea, but focus has been very much on their Europa League adventure.

The Reds have still won six of their last 10 matches in all competitions, though, with just two defeats in that time.

The quality of football has been impressive, on the whole, with the 3-0 semi-final second-leg win over Villarreal one of the performances of the campaign.

West Brom have completely tailed off as the season has progressed, with Tony Pulis’ side ensuring survival and then appearing to down tools.

The Baggies have only managed one victory in their last 10 matches – a 1-0 win at home to Man United – and they have failed to pick up three points in their last eight outings.

Their style of play has been exactly what you would expect from a Pulis team – defensive-minded and ugly, but also effective – and they have chipped away at enough points to stay in the top flight.

Pulis has often enjoyed success against Liverpool over the years – the horrific 3-3 draw when he was Crystal Palace manager certainly stands out – and he will fancy his chances of overcoming a weakened Reds side on Sunday. The two sides last met back in December, when Klopp’s side needed a late slice of luck to avoid defeat at a frustrated Anfield.

Jordan Henderson had seemingly fired his side towards victory, following a well-taken first-half strike, but Simon Mignolet gifted Craig Dawson an equaliser before the break.

Jonas Olsson gave the visitors the lead with a 73rd-minute header, but Divock Origi‘s deflected stoppage-time effort salvaged a point for Liverpool.

Last season’s showdown at the Hawthorns was a wretched 0-0 draw, as the Reds’ top-four hopes continued to go up in smoke.

Liverpool’s last win over West Brom came in October 2014, with goals from Adam Lallana and Henderson inspiring Brendan Rodgers’ side to a 2-1 win.

A Luis Suarez hat-trick back in 2013/14 was a standout moment in this fixture, with Daniel Sturridge‘s outrageous chip in the same game equally brilliant.

Kolo Toure’s calamitous mistake at the Hawthorns later that season, which gifted West Brom a 1-1 draw, was a moment to forget, however, and threatened to derail Liverpool’s title challenge.

Sunday’s showdown will be the 146th meeting between the two sides, with Liverpool’s most emphatic win against the Baggies a 6-0 triumph in April 2003. Michael Owen scored four goals that day. Simon Mignolet may possibly start, considering Danny Ward is injured and Adam Bogdan is an accident waiting to happen, but even that would be surprise.

The likes of Jon Flanagan, Martin Skrtel and Brad Smith should come in at the back, with Lucas Leiva also potentially slotting in.

It may well be Skrtel’s last ever game for the club, after more than eight years of service. For all his faults, he deserves a decent sendoff. Henderson, Divock Origi and Danny Ings are all closing in on a return, and the latter could feature on Sunday, while Joe Gomez has returned to outdoor work following an ACL layoff.

Pulis has several injury problems ahead of his side’s final game of the season, with six players currently on the treatment table.

Chris Brunt is a long-term absentee, having suffered a cruciate ligament injury earlier on in the campaign, and James Morrison is also out.

Former Man United players Jonny Evans and Darren Fletcher could both miss out, while Stephane Sessegnon and Alex Pritchard are also doubts.

Klopp reflected on his first seven months as Liverpool manager, and discussed his relationship with the fans:

“I’m not sure that it could be better in the case of relationship with the club. with the fans, players, no. That’s better than I could imagine,” he said.

“We could have more points, to be honest. I remember some games where it didn’t make sense to lose.

“Now I see the table, how close it is, where we would be with three or four points more. On the Premier League side it could be better, but it’s okay in the moment.

“We’ll try our best and see where it ends [away to West Bromwich Albion], then go to the final. We created a quite nice relationship in seven months, that’s right.”

“It’s always been my philosophy to make sure everybody works hard and the shape of the team and organisation.

“We allow them to have the ball in certain areas, we’re quite happy for them to be there.

“You look at my team, you can say it’s got an identity.

“The worst thing for me as a coach or a player is going and watching a game of football and look at the team and think I don’t know what the bloody hell they’re doing.” The bookies clearly don’t believe Liverpool will be at full strength on Sunday afternoon, with the odds very much reflecting that. This guide tells you all you need to know about betting on sports with real money.

Both teams to score is 3/5, although given Pulis’ preference for sleep-inducing defensive football, that may not be a good bet. Backing that not to happen at 5/4 makes more sense.

Benteke has found a little bit of form in recent weeks, scoring in two of his last three league games, and the big Belgian is 51/10 to score first.

Sheyi Ojo has also impressed during the back end of the season, producing four assists in five appearances, and the young winger is 23/2 to open the scoring.

Salomon Rondon is West Brom‘s most likely player to register first on the day at 21/5.

The match is not live on UK television, but as usual This is Anfield will have full live coverage of the action as it happens.