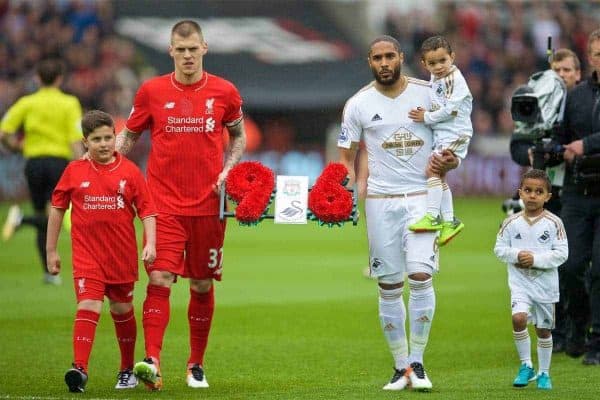 Swansea City paid tribute to the families of the 96 after Tuesday’s Hillsborough inquest verdict, laying a wreath at the Liberty Stadium on Sunday.

Watch the special moment the Liberty Stadium paid tribute to the Hillsborough victims this afternoon. #JFT96https://t.co/gaoHeawfai

Welcoming Liverpool to south Wales for the Reds’ first outing on home soil since Tuesday’s justice verdict, the Swans honoured those who lost their lives at Hillsborough.

Ahead of Sunday afternoon’s 3-1 defeat, Liverpool captain Martin Skrtel joined his Swansea counterpart, Ashley Williams, to lay a ’96’ wreath in front of the travelling Kop.

The Swans also paid tribute in their matchday programme, labelling Tuesday’s verdict as “the greatest victory in the history of the greatest game.”

Writing in his programme notes, Williams said that “justice for the 96 has finally been done.”

“It’s been an emotional week, I am sure, for anyone connected with the city of Liverpool following the conclusion of the Hillsborough inquests,” Williams wrote.

“I was delighted to see the verdict last week.

“Justice for the 96 has finally been done, and I am pleased that the families of the victims have been vindicated for their 27-year battle for the truth.”

To mark the Hillsborough families’ 27-year fight for justice, the Liberty Stadium erupted with applause on the 27th minute on Sunday afternoon.

With the travelling Kop providing a rendition of ‘You’ll Never Walk Alone’, the two sides served up a fitting tribute to the 96.

This was just one of many tributes across Europe following Tuesday’s verdict, flowing from Newcastle to St. Etienne, to remember the victims of the tragedy, and to celebrate justice.