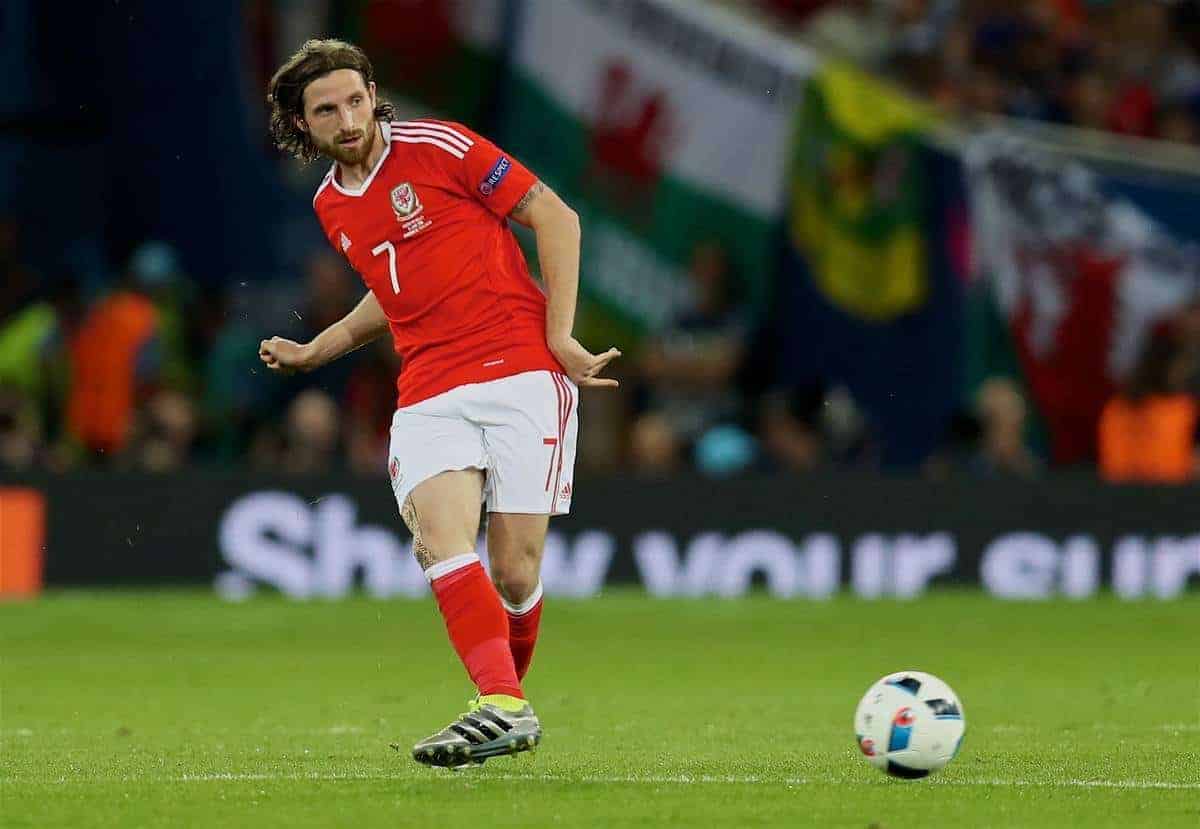 Following on from Ben Twelves’ assessment of Liverpool’s England stars’ performances so far at Euro 2016, he now takes a look at how the rest of the Reds’ internationals are getting on.

The Welsh midfielder has unquestionably been Liverpool’s player of the tournament so far, impressing spectacularly on the elite stage.

Gareth Bale will always get the headlines with Wales, but Allen’s performances have been equally as fundamental to Chris Coleman’s side impressively winning Group B and moving into the knock-out stage.

Battling and play-making in midfield – where he claimed a magnificent assist for Aaron Ramsey’s goal against Russia in the crucial final group clash – Allen has been vital to knitting Wales together.

His classy displays against Slovakia and Russia in particular have seen him become a real cult hero among Reds and Wales fans, who recently united on social media for a brilliant ‘Joe Allen Appreciation Day’ to show their gratitude for his talents.

As vital a component as any in Coleman’s side, Allen will certainly continue in the heart of midfield, with producing another dominant display against Northern Ireland his next task.

Travelling to France as a back-up ‘keeper, the experience of being involved was likely to be all the 22-year-old would enjoy.

But stepping in for the injured Wayne Hennessey, Ward made a surprise start in the opening group game with Slovakia, impressing hugely under intense pressure helping his side to a crucial 2-1 win.

That has proven Ward’s only outing, with the youngster dropping back to the bench when Hennessey returned, and though slightly disappointing that he didn’t get to build on a positive outing, it is understandable.

Ward is unlikely to feature again, but if that proves the case, his opening fixture performance has made his first major competition a fantastic one.

And that looks likely to be made even more special with the fact he looks set to return to Anfield with his 100% winning record in major tournaments kept intact.

Mignolet is the one of two Liverpool players not to have featured yet at Euro 2016.

The Reds’ stopper has watched from the bench for the entirety as his team secured progression as runners’ up in Group E with wins against Republic of Ireland and Sweden.

Chelsea’s Thibaut Courtois remains first choice, and that won’t change as the business end of the competition draws in.

Mignolet looks set to return home without having played a minute as he prepares to fight for the No.1 spot with new arrival Loris Karius.

Like at World Cup 2014, Origi entered the tournament as second choice striker to Romelu Lukaku in Marc Wilmots’ pecking order.

The Reds striker started the opening game against Italy on the bench as a result, but was thrown on with 17 minutes remaining to rescue the game with his side 1-0 down.

Origi nearly made the difference but couldn’t convert two close-range headers as his side slumped to a 2-0 loss – which conversely to two years ago, cemented his place among the substitutes.

With Lukaku scoring twice in victory over Ireland, the Everton striker cemented his own position as Wilmots’ first choice striker, leaving Origi to play only a single minute over the last two group games – that as a 93rd minute sub against Sweden.

The 20-year-old can do nothing other than hope as he waits in the wings for another opportunity – how different it could have been had he found the net against the Italians.

Liverpool’s No.9 has had the tournament most expected he would – one of little action and impact as a result.

Behind Lukaku and Origi, Benteke is viewed as third choice in the Belgian camp, and has been used as such, handed run-outs when his side have been in a comfortable position.

Benteke played just 11 minutes across the three group games – the fewest of any player to have made it onto the pitch for Belgium – used as late subs against Ireland and Sweden as his side secured their last-16 place.

With Origi and Lukaku clearly ahead, unless the situation for Belgium becomes one of extreme comfort or desperation, Benteke faces more of the same. As has become familiar with Skrtel, it’s been a tournament of severely mixed fortunes for the Slovakia captain.

Playing every minute possible so far, he’s had a real indifferent time on the pitch – starting with a dreadful opening display against Wales in which he was a liability defensively and lucky to escape a red card for a nasty elbow on Neil Taylor.

But since then, Skrtel has bounced back impressively, producing a battling display with giant striker Artem Dzyuba against Russia, and a trade-mark all-action, whole-hearted outing to keep England at bay.

Having secured a place as one of the best third place finishers, Skrtel now leads his side into battle against Germany.

Another monstrous defensive showing will be needed against the world champions. Along with Mignolet, Liverpool’s powerhouse midfielder is the only other Red not to have played yet in France.

Can has sat among the substitutes as Joachim Low favoured Toni Kroos and Sami Khedira as his midfield pairing to guide Germany through to the last-16 as Group C winners, setting up a favourable last-16 tie with Slovakia.

The German will hope he is afforded his maiden outing and the chance to impress as his side come up against Skrtel’s team in Lille on Sunday afternoon.