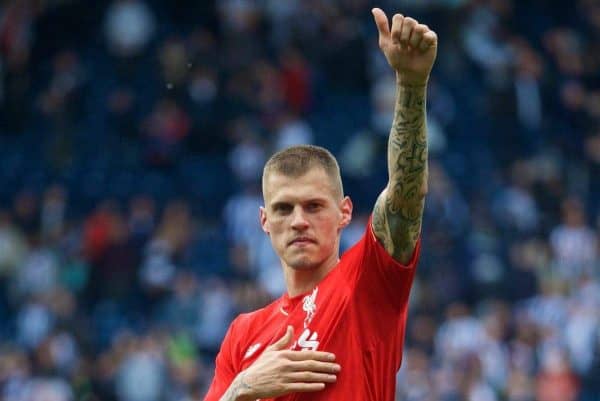 Liverpool centre-back Martin Skrtel is close to joining Fenerbahce, bringing an end to his eight-and-a-half year stay on Merseyside.

The 31-year-old’s future was always likely to be decided once Slovakia were knocked out of Euro 2016 and there appears to progress after Germany sent them packing on Sunday afternoon.

It has looked as though Skrtel would leave Liverpool this summer since he lost his place in the team earlier this year, and it now appears as though the inevitable is close to happening.

The Turkish giants have been strong favourites for his signature all summer, with a £5.5 million deal rumoured in recent weeks.

Should Skrtel move on, it will bring an end to nearly a decade of service at Anfield, having joined from Zenit St Petersburg for £6.5 million in January 2008.

There have been plenty of ups and downs along the way, and as time has gone by, it has become more evident that the Slovakian is the weak-link in a consistently fragile back-line.

His first-team chances became increasingly limited under Jurgen Klopp last season, and he ended up only featuring in relatively meaningless Premier League games at the end of the campaign.

Mamadou Sakho and Dejan Lovren are both now undoubtedly ahead of him in the pecking order – Sakho is still awaiting the verdict of a failed drugs test – and Joel Matip‘s arrival from Schalke further suggests Skrtel is not needed.

One big final move makes total sense for the big centre-back, before age really starts to catch up with him.