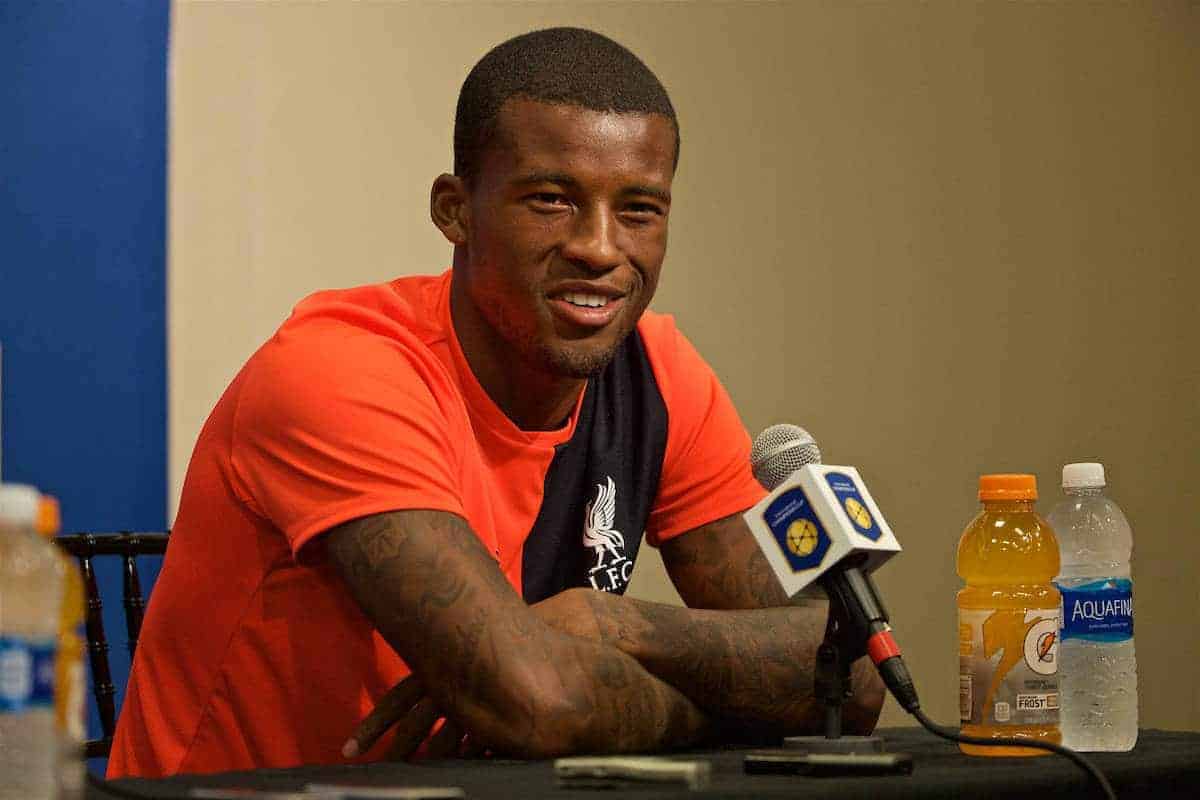 New Liverpool signing Georginio Wijnaldum is looking forward to making his debut for Jurgen Klopp‘s side against AC Milan.

The Reds take on Vincenzo Montella’s fallen giants at the Levi’s Stadium in Santa Clara, California on Sunday morning (3.05am BST), as they continue their pre-season preparations.

Last time out, they lost 1-0 to Chelsea in Pasadena, with Wijnaldum remaining at their Palo Alto training camp to improve his fitness.

However, along with Daniel Sturridge, Nathaniel Clyne, Simon Mignolet, Divock Origi and Christian Benteke, he will be hoping to feature against Milan.

Speaking to reporters at the Levi’s Stadium on Saturday, the Dutchman said: “I can’t wait to get started.”

“It’s always great when you get to show what you can do,” he explained.

“This is a club with a great history which has won a lot of titles and I can’t wait to get started.

“I was a bit disappointed I didn’t play against Chelsea but the staff decided it would be better for me to complete more training sessions first.

“Now I am looking forward to making my debut.”

The 25-year-old also noted how training under Klopp was “totally different” to at his former club, Newcastle United, saying it was “more like how the training was in Holland.”

Wijnaldum’s versatility is characteristic of his Eredivisie upbringing, that saw him turn out in the youth ranks of Sparta Rotterdam, before moving onto Feyenoord and then PSV Eindhoven.

Liverpool’s No. 5 is able to play in all manner of positions in midfield, from a deeper, creative role to a box-to-box duty to any position across the forward line.

This is one of the key factors behind Klopp pursuing a £25 million deal to bring him to Anfield, and though he has previously stressed that his favoured role is behind the striker, Wijnaldum said that would be happy to play in any position.

“I can play in different positions and if I can do what I’m good at—score goals, show how good I can play football—then it’s OK with me,” he added.

Where Wijnaldum lines up against Montella’s Milan remains to be seen, though it is likely that he will start in a midfield role.

Sadio Mane, Roberto Firmino and Philippe Coutinho have established themselves as key players behind Liverpool’s centre-forward, while Adam Lallana, Lazar Markovic and Sheyi Ojo could also operate in their roles.

Starting alongside the likes of Jordan Henderson, Kevin Stewart and Cameron Brannagan seems the most likely for Wijnaldum, who will look to break through the lines from deep.