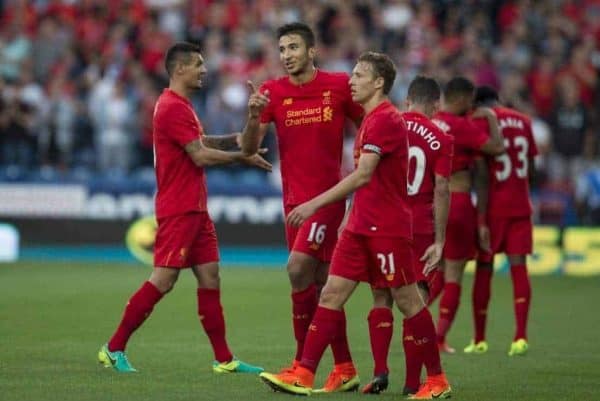 Klopp, as expected, named a starting XI mixed with senior players, squad members and youngsters for the Reds’ final game against a club side on home soil.

The Liverpool boss reshuffled his team with Joel Matip and Cameron Brannagan missing out with minor niggles, but there was no place for new recruit, Ragnar Klavan, as Klopp again deployed a 4-3-3 formation.

Alberto Moreno – in for Jon Flanagan who was left out amid reports of a loan offer from Burnley – and Marko Grujic returned to defence and midfield respectively, after both missed Sunday’s Wigan victory.

The Spaniard formed the back four with Connor Randall, Dejan Lovren, and skipper for the night, Lucas, as the defensive unit ahead of Loris Karius.

Grujic was joined in a three-man midfield by Kevin Stewart and youngster Ovie Ejaria, with Sadio Mane and Philippe Coutinho supporting ‘false-9’, Roberto Firmino in attack.

Due to injuries, Klopp named the fewest substitutes he has this pre-season so far, with Danny Ings, Lazar Markovic and Ben Woodburn among the seven waiting in reserve.

The Reds made a sharp start to action on a fine summers evening at the John Smith’s stadium, instantly pressing all over the pitch against the home side, who were equally as hard-working off-the-ball.

Huddersfield had the first chance after nine minutes, when poor play from Lucas saw possession surrendered and a shot unleashed on goal from Joe Lolley, which sailed wide.

Rajiv van La Parra was next to try his luck for David Wagner’s side after being afforded too much space on the edge of the box, but his strike similarly missed the target as the Terrier’s made a positive opening.

After a quiet first 15 minutes going forward, the Reds woke to produce a fantastic move involving Grujic, Firmino and Coutinho, who teed up Mane, but the new arrival shot into the side-netting.

Now growing into the game, Liverpool thought they had taken the lead two minutes later in somewhat comical fashion, but Mane saw his tackle-come-shot wrongly disallowed for a foul on ‘keeper Joel Coleman as he scrambled to retrieve a poor back-pass.

It was the home sides’ turn to go close next, and only a fantastic save at full stretch from Karius denied Lolley finding the net after 22 minutes – that a minute before Moreno had shouts for a penalty turned down.

Wagner’s men gave as good as they got in a feisty first 30 minutes, but on the half-hour mark Liverpool took the lead through Grujic’s excellent finish.

A slick break saw Mane get in down the right and find Firmino, who picked out the Serbian brilliantly at the back-post, where he controlled and slammed home with a left foot half-volley for his second Reds goal.

A minute later, Klopp’s side had the chance to double the lead, after the lively Mane, now a real influence on the game, broke in behind to win a penalty after being fouled by Coleman.

The impressive Mane, key to a lot of Liverpool’s good play, tried his luck again but shot wide, moments before Grujic, saw his goal-bound curler blocked.

It was the last action of an entertaining first-half, aside from Moreno being flattened by a stiff challenge from Tommy Smith, as the Reds went in with a deserved one-goal lead at the interval.

As news filtered through that the Reds have agreed a £13million fee with Stoke for Joe Allen, Klopp made six changes at half-time, with all outfield options Wisdom, Alexander-Arnold, Kent, Markovic and Woodburn entering.

Randall, Ejaria, Grujic, Mane, Coutinho and Firmino were the players to make way after another productive 45 minutes, with the home side making 10 changes for the second period.

It was the Reds who settled quickest after mass alterations, with Kent and Markovic both making some lively early runs, but the home side passed up a decent chance to equalise, with Kyle Dempsey firing over inside the box.

After a bright opening to the second period for both teams, a scrappy affair broke out, with rhythm disrupted for both sides following the substitutions.

On the hour mark, with a drone hovering above the stadium pausing play briefly, the Reds went down to 10-men as Lucas exited with a hamstring injury, forcing Klopp’s side to briefly play a 4-1-3-1 formation.

That was for all of five minutes, before Klopp, buying into the pre-season spirit, gave young goalkeeper Shamal George a debut to remember as an outfield player – with the stopper filling in up front.

And the ‘keeper-turned-striker so nearly made an instant impact, controlling brilliantly and almost releasing Markovic on goal, but the through pass was over-hit.

Huddersfield took control against the young Reds, forcing Klopp’s makeshift side to work hard and stand up to the challenge for the final 20 minutes.

With 15 minutes left, Dempsey almost fired home an equaliser, but his driven effort flashed narrowly wide, five minutes before George appeared in on goal with the chance to net on an unforgettable debut, but the linesman flag cruelly denied him.

As the game petered out, Kent won the Reds’ second penalty of the night, which Moreno – to boos from the travelling Kop who wanted George to step up – took and converted to make it 2-0 and maintain Liverpool’s 100% winning record in pre-season.

The Reds now prepare to fly out to the US as they continue preparations by taking part in the International Champions Cup competition.