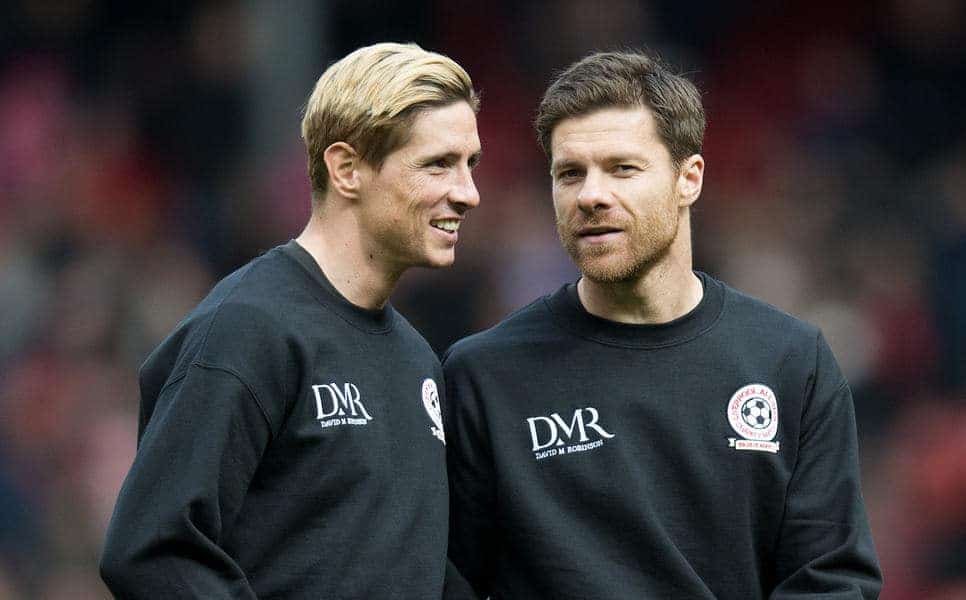 In the latest in our series of themed XIs, we take a look at Liverpool’s best possible side from signings costing between £10 million and £25 million.

Previously, we selected a bargain XI, chosen from Reds players who arrived at Anfield for less than £10 million.

The likes of Pepe Reina, Sami Hyypia, Didi Hamann and Dirk Kuyt all featured, proving that Liverpool have made some very shrewd purchases down the years.

But what about those who have been a little bit more expensive?

The Reds have been hit-and-miss when it comes to splashing out vast sums on players, but there have been some great success stories.

Here is our best possible Liverpool XI, from players costing between £10 million and £25 million.

OK, so we’ve had to cheat a bit here, because no Liverpool goalkeeper has ever cost £10 million or more. It was either that or put Alberto Aquilani in goal!

Simon Mignolet made the move to Merseyside from Sunderland in the summer of 2013, costing £9 million.

Although the Belgian is yet to fully convince during his three years at the club, he performed solidly in 2013/14, as the Reds came agonisingly close to winning a first-ever Premier League title.

His shot-stopping ability can be excellent on his day, and there have been a few influential performances thrown in.

Mignolet’s place in Jurgen Klopp‘s first-choice starting lineup is now severely under threat, though, following the arrival of Loris Karius from Mainz.

Glen Johnson proved to be a frustrating signing, especially considering the money he cost, but that’s not to say he was all bad.

The former England international was a very talented right-back with an eye for the spectacular, and he started his Reds career strongly.

Lapses in concentration and a general air of casualness were often infuriating, but there have been far worse full-backs throughout Liverpool history.

Steve Finnan and Alvaro Arbeloa were both far better value for money, however.

Great things were expected of Dejan Lovren when he arrived from Southampton for big money in 2014—it made him the Reds’ most-expensive centre-back ever—with many tipping him to solve Liverpool’s ongoing defensive issues.

After a poor first season at Anfield, and a very shaky start to 2015/16, the Croatian came of age under Klopp, and was superb by the end of the campaign.

His last-gasp winner against Borussia Dortmund was arguably the highlight of the entire season, and he played with great authority in the centre of the Reds’ back line.

Lovren can still improve, in order to fully justify the money the club paid for him, but he is certainly heading in the right direction. Javier Mascherano is one of Liverpool’s best signings of the last 20 years, and he has gone on to enjoy a sensational career.

The Argentine never played at centre-back for the Reds—he was part of the best midfield in the world instead—but he has since dropped back into defence for Barcelona.

In order to accommodate others into this team, we’re slotting Mascherano alongside Lovren, in what could be a formidable partnership.

The feisty South American was, and still is, a world-class footballer, with pace, aggression, technical expertise and leadership galore. Left-back has been an area of concern for Liverpool ever since Fabio Aurelio’s injury problems prevented him from featuring regularly, but Alberto Moreno was seen as the solution two years ago.

The Spaniard remains fairly young and raw, but much more is required from him if he is to remain first choice under Klopp.

Moreno has bags of energy, and can add an important attacking dimension down the left flank, but defensively he is shambolic.

The 24-year-old is still worth persevering with, but he will be under real scrutiny from game one onwards next season. One of the best bargain buys in Liverpool’s history—£10.7million is a bargain for a player of his ability—Xabi Alonso was magnificent during his five years at Anfield.

A genuinely world-class playmaker with a perfect attitude and a winning mentality, he won the Champions League in his first season, scoring the all-important equaliser against AC Milan in the final.

Alonso could dictate a game with consummate ease, and his on-pitch relationship with Mascherano and Steven Gerrard made them the best midfield trio in Europe during the late 2000s.

It was a sad day when he left to join Real Madrid in 2009, but his relationship with Rafa Benitez had soured, and it was tough to begrudge him a move to one of the world’s biggest clubs.

Jordan Henderson‘s Liverpool career has been an intriguing one, since joining from Sunderland for £16 million in 2011.

The Reds skipper recovered brilliantly from his dark early days at the club, becoming a key player in 2013/14 and 2014/15, but he struggled with form and fitness last season.

The 26-year-old is not perfect, by any means, but he gets a hard time from many, and is a very effective box-to-box midfielder when in peak condition.

Henderson will never be Gerrard, but he is a key part of the squad, and a very underrated footballer. It is debatable whether he should be captain, though, and Klopp may address that this summer.

Much like his former Southampton team-mate Lovren, Adam Lallana took a while to get going at Anfield, but he now really looks the part.

The 28-year-old is a lovely player to watch, combining quick feet, clever movement and endless running, and he linked up beautifully with the likes of Philippe Coutinho and Roberto Firmino last season.

The England international’s end product in the final third still needs to go up a gear, though, especially with more competition for places next season.

He is the fifth-most expensive signing in Liverpool history, so it is understandable to expect brilliance week in, week out from him.

It was seen as something of a gamble when Liverpool signed Daniel Sturridge from Chelsea in January 2013, with his attitude and all-round ability questioned.

He scored on his debut, in the FA Cup against Mansfield, and has been magnificent ever since, when fit.

Fifty-three goals in 92 matches is an amazing return, especially considering he barely takes penalties or free-kicks, and his finishing and movement are both world-class on their day.

Keeping Sturridge fit is one of Klopp’s biggest tasks, but if the 26-year-old can rid himself of the injuries that have blighted his career recently, he will be the Reds’ most important player for the next few years.

Luis Suarez was highly rated when Liverpool paid £22.8 million for his services in January 2011, but nobody realised just how special he would become.

The Uruguayan took a little time to adjust to life in England, but in 2012/13 he came alive, with a fair chunk of his 30 goals truly memorable efforts.

Then, in 2013/14, he almost inspired the Reds to the title—for a spell during that season, he was the best footballer on the planet.

Blessed with outrageous natural ability, sublime finishing and a fantastic team ethic, Suarez was a joy to have at Liverpool. Eighty-two goals in 133 games, and many assists, is phenomenal.

He wasn’t always the best role model, but he could well be the most gifted player to have ever represented the club.

It is very easy to forget just how good Fernando Torres was for Liverpool, having left for Chelsea under a cloud in early 2011.

‘El Nino’ had been a young superstar for Atletico Madrid, but under Benitez at Anfield, he became the best striker in the world.

Blisteringly quick over a short distance, a nerveless finisher and a perfect foil for Gerrard, Torres deserves to be remembered as one of the Reds’ greatest goalscorers.

Eighty-one goals in 142 appearances, without taking penalties, says all you need to know about how ruthless and consistent the Spanish icon was.

Can you do better? Let us know your XI in the comments.