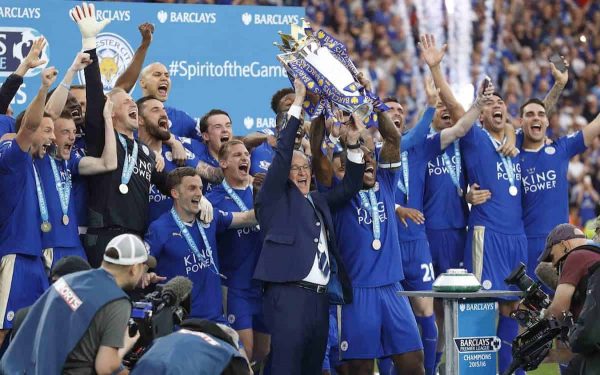 Continuing our previews of Liverpool’s 2016/17 Premier League opposition, Leicester City are the latest to be covered.

The Foxes embark on a challenging campaign this month, as Claudio Ranieri’s side look to defend their remarkable title victory from 2015/16.

Under the benevolent Italian, Leicester surged to their first Premier League triumph, just two seasons after their promotion from the Championship in 2014, finishing 10 points clear of second-placed Arsenal—with help from a 2-0 victory over Liverpool in February.

Now with Champions League football and heightened expectation to deal with, Leicester have a fight on their hands to stabilise their credentials as a top-level outfit.

To gain an insight into Leicester‘s summer preparations and their hopes for 2016/17, we spoke to Jamie Thorpe of First4LCFC to get the Foxes’ view ahead of the new season.

Firstly, what are your thoughts on Leicester ahead of the new season?

This is genuinely uncharted territory for Leicester City, and we find ourselves in the truly unprecedented position of being able to start the season under no real pressure.

Whilst for most clubs a title defence would bring a certain obligation to start well to ensure a strong campaign, City are not really expected to retain the title and with relegation not likely to be an issue either, they have the freedom to go out and play with the same ‘no fear’ style that paid such dividends in the previous campaign.

Of course we are competing in the Champions League for the first time in our history and I genuinely believe we can make our mark on the competition, but will judge getting out of our group as a standout success.

My only negative is the loss of N’Golo Kante, as I like many others was excited to see how the team that won the league fared on the European stage. However, on the whole, this has the potential to be an exciting season for our club and I hope we push on to make the most of it.

And how have you rated Claudio Ranieri’s work in the transfer market so far?

In terms of outgoings I am disappointed that Kante left but understand we did everything in our power to keep him, so it would be hard to blame Ranieri for this.

Overall, I think we have strengthened well and added some real depth to the squad.

We broke our transfer record twice in one week with two relative unknowns: Nampalys Mendy looks a canny acquisition in the centre of the park but I fear he may only ever be judged against his predecessor, and Ahmed Musa will absolutely terrify defences with his electric pace and dribbling ability.

We may also have potentially picked up some Ranieri-esque bargains in Ron-Robert Zieler and Luis Hernandez and with more signings likely, the window must surely be judged a success.

What is Ranieri’s likely first-choice lineup for the new season, and where do you see them finishing?

In truth Ranieri will likely start with the team that served him so well last season.

Demerai Gray has been scintillating in pre-season and will be pushing Marc Albrighton for a place, Musa, Jeffrey Schlupp, Andy King and the exceptionally promising Ben Chilwell have all put in strong cases for a starting berth as well but it is hard to look past that lineup.

The Tinkerman moniker may well make a return this year, but with our new-found strength in depth this may be no bad thing.

In my view City will finish around 7th. I think we are stronger than some fans and pundits are predicting, which suits us perfectly, but with the new experience of European football to contend with I think anywhere in the top eight is still to be regarded as a successful season.

As well as being extremely likeable, Jurgen Klopp is a tremendously capable manager and it will be interesting to see if his ethos has been imprinted on Liverpool’s play after a full pre-season.

Sadio Mane is worth the money for me and should provide the consistent goals that have arguably been missing, and with Georginio Wijnaldum added to other talents such as Philippe Coutinho, Roberto Firmino and Adam Lallana then you have a potent attacking unit.

Teams will not look forward to playing Liverpool, but perhaps the defence is not quite deep enough to warrant labelling as title contenders just yet—sixth seems a fair prediction on balance.

When we play there: September 10

Away fans’ pub: The Counting House

Jamie’s advice: “In general the King Power is a welcoming place as away grounds go. As a modern stadium accessibility is simple, but if travelling by train do allow a bit of time as the police are prone to organising an escort down to the ground!”

Who Jamie predicts to win the Premier League: Manchester United