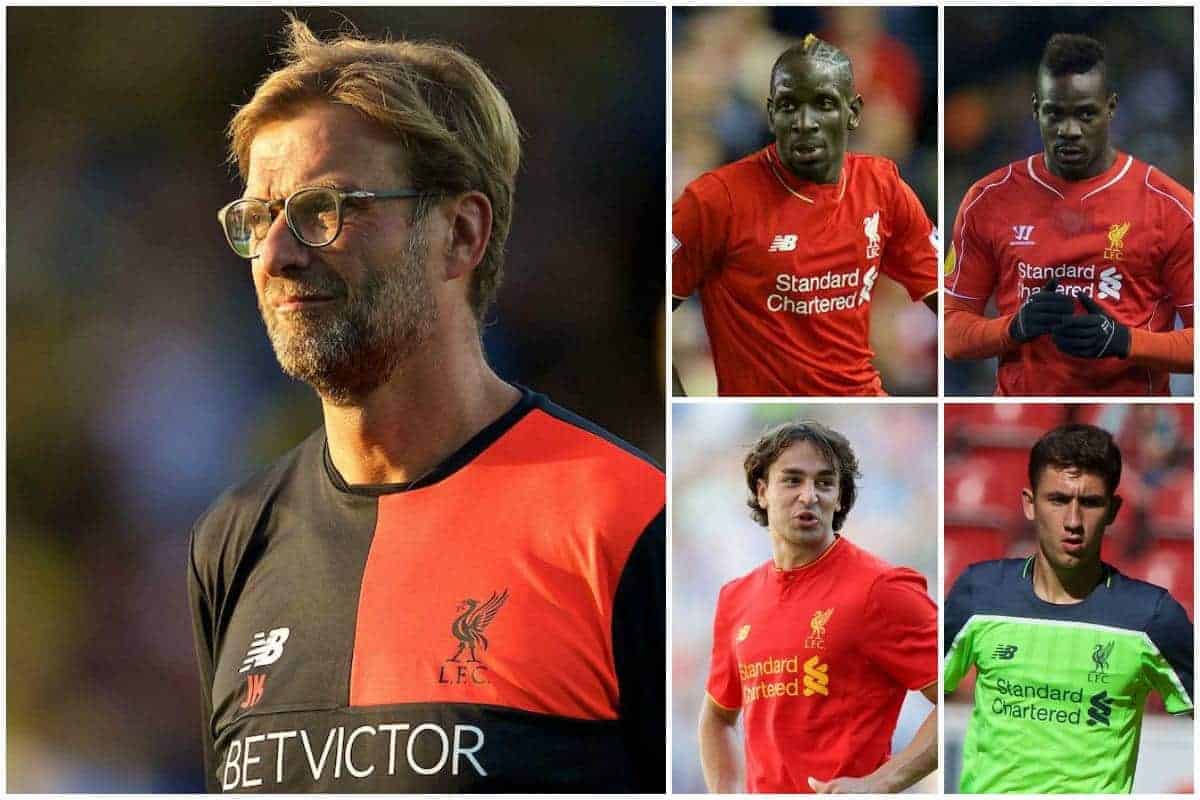 As Jurgen Klopp enters the final week of the summer transfer window, the Liverpool manager still has a number of potential issues to finalise.

Back at the start of the summer, Klopp explained how he was looking to seal the majority of his transfer business before his squad reconvened at Melwood on July 2nd.

Most of his seven signings were acquired early, but there is still work to do as he looks to reshape a Liverpool side capable of challenging at the top end of the Premier League.

The transfer window closes next Wednesday, leaving Liverpool with just one week left to finalise dealings in the market.

Here are seven potential issues Klopp could consider over the next seven days.

After an incorrect UEFA drug suspension, a pre-season fallout and continued fitness issues, Klopp looks to have made his mind up about Mamadou Sakho.

The German is believed to be exploring a loan move for the French centre-back this summer, but having only developed in the closing stages of the summer transfer window, has little time to resolve the situation.

Sakho has only just returned to first-team training following a heel injury, and it remains to be seen whether he will be receptive to a temporary move before the end of August.

Finding a club willing to take him on loan will prove a challenge for Klopp, as though AS Roma and Bayer Leverkusen held an interest in the past, Sunderland are reported to have already turned down the opportunity, with Sakho’s conditioning likely a concern. Stoke City are the latest to be linked.

If Sakho is to leave, Klopp would be a centre-back light, with only Joel Matip, Dejan Lovren, Ragnar Klavan and Joe Gomez as natural options.

Lucas Leiva is available as cover, but is not a long-term solution, while Gomez is still recovering from a heel problem that came directly after his comeback from an ACL injury. Gomez has also never played centre-back in the Premier League and will be a long way from fitness having not played in almost a year.

While seven days is arguably not enough to identify and push for a move for a new centre-back, Liverpool will likely need more defensive cover in 2016/17.

Ideally, this would be a player comfortable in a number of positions, but this looks unlikely as much as it is needed. Three games into the new season, Liverpool look far from settled in one key position, with Klopp seemingly undecided on his first-choice left-back.

After Alberto Moreno struggled in the Reds’ season opener at Arsenal, James Milner has filled in against Burnley and Burton, but experienced vastly differing fortunes in both.

Neither Moreno or Milner are the ideal options at left-back, but Klopp has recently stressed that he would only move for the “perfect fit.”

But opting for a more reliable option would certainly provide Klopp with more stability. Again, it’s an issue, but unlikely to be resolved this month.

Shoring Up the Midfield Base

Along with left-back, defensive midfield is another area that looks to be lacking within Klopp’s squad in the final week of the transfer window.

With clear first choice Emre Can still working his way back to full fitness, and possibly suffering a setback in Tuesday night’s win at Burton, Jordan Henderson is Klopp’s most likely alternative at this stage.

Henderson, Lucas and Kevin Stewart are reasonable, but unconvincing options at the top level, leaving Klopp putting his faith in Can throughout 2016/17.

This is a risk, given the demands placed on the 22-year-old already, and another addition in this crucial role would be wise.

Bologna, Crotone, Palermo, Fiorentina, Everton, Man United, Besiktas, FC Sion, and every club in China, are among the clubs mooted as possible destinations for surplus striker Mario Balotelli this summer. Even Port Vale and Wolves have somehow been linked.

But despite the perceived interest in the 26-year-old, Liverpool are yet to find a taker, and this could prove to be a problem.

Balotelli would be a gamble for any side this summer, having scored just seven goals in 51 games over the past two seasons, magnifying the Reds’ challenge before August 31.

He has successfully shifted Christian Benteke this summer, but Klopp will be desperate to find a new club for Balotelli as he finalises his squad for 2016/17.

Balotelli won’t be the only player to leave this week, with Liverpool likely to cut more deadwood from the squad before the end of the window.

Serbian winger Lazar Markovic is set to depart having failed to make the squad for any of the Reds’ three fixtures so far this season—perhaps most tellingly not travelling to Burton on Tuesday night—with AC Milan interested.

Meanwhile, Luis Alberto is a target for Aston Villa, Wolverhampton Wanderers, Queens Park Rangers and Valencia, with the Reds looking to seal a £3 million move for the midfielder.

Finally, there is no place for centre-backs Tiago Ilori and Andre Wisdom, and their departures are also likely as Klopp rounds off his summer business.

While Balotelli, Markovic, Alberto, Ilori and Wisdom will all available on permanent deals, Klopp must also decide whether to send some of his young talents out on loan before August 31.

With the scrapping of the emergency loan system meaning players are unable to be recalled until January, Klopp’s decision must be definitive, and as a result Liverpool have pushed to guarantee their loanees play at least 75 percent of their new clubs’ games this season.

Negotiating loan deals for the likes of Pedro Chirivella, Cameron Brannagan and Connor Randall would be beneficial this summer.

Without European football to stretch his squad this season, utilising the loan market could be a priority for Klopp in the final days of the transfer window.