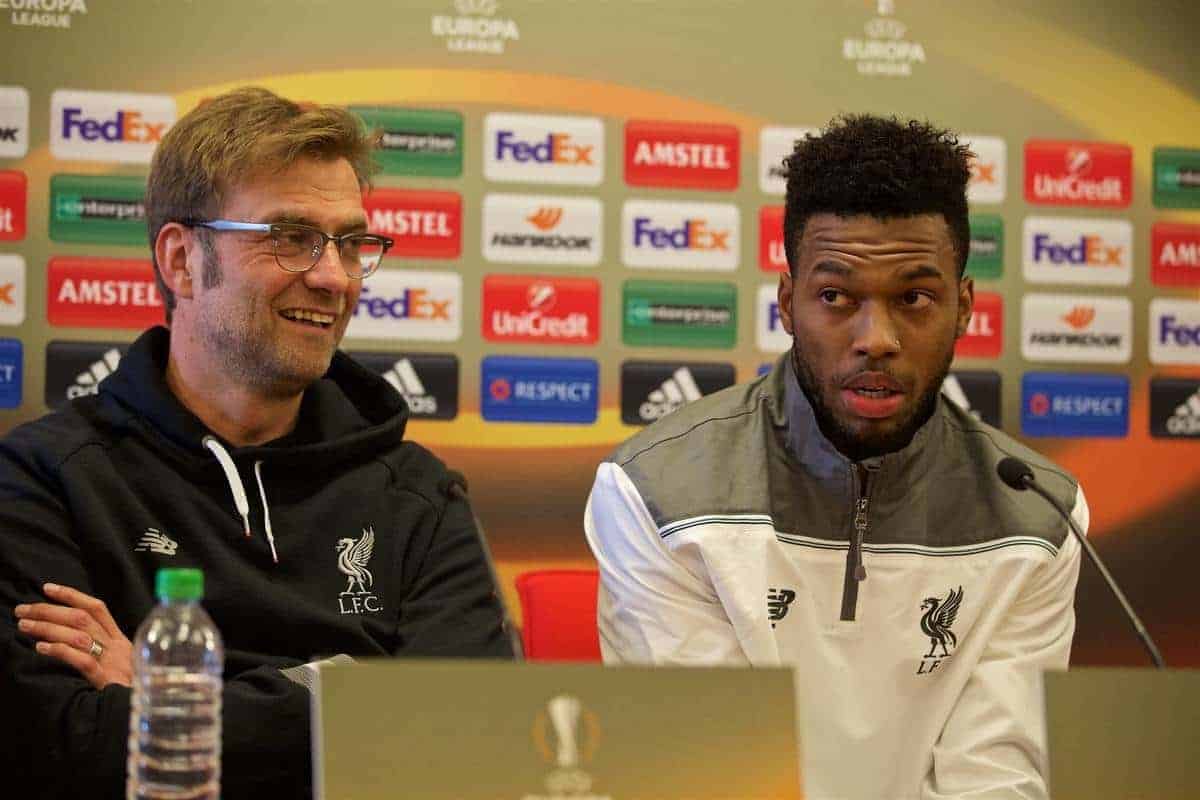 The last time Liverpool didn’t have a European competition to contend with, they almost won the league. Heading into the 2016/17 season, fans will be expecting another effort which prioritises that elusive Premier League title.

Here are five things which could define the Reds’ season under a manager who has now had a full pre-season to prepare his squad, and one who recently said that “we shouldn’t look for excuses and say things like ‘I need another year’.”

With this in mind… The no-holds-barred interviews, the unexpected swearing in press conferences, the counter-pressing, the man management, the rapport with both players and fans, the hugs, the grin.

The man and the club – it all seems to be a perfect fit.

He’s even managed to raise the decibel level in Anfield, and already cites one night there – against Dortmund in the Europa League – as the best atmosphere of his career so far.

But when it comes to the opening games of the 2016/17 season, starting at Arsenal’s Emirates Stadium, all that matters are the results on the field.

Each of the four goals scored in last weekend’s friendly against Barcelona were the result of pressing of one type or another.

The mentality was also encouraging, and the players looked hungry despite the pre-season context of the game.

This is football though, and anything can happen. Regardless of the style, Klopp will ultimately be judged on the substance, and in Liverpool’s case a substantial success would be a top four finish.

Will the defence hold out? As a unit, Liverpool’s back four struggle for consistency.

Each player has taken their turn to be the scapegoat, and it’s been obvious in recent seasons that a new presence between the posts is also needed.

Even if a defender merely does the job required of them without necessarily being outstanding, then the rearguard unit will be difficult to break down and the individuals will look better as a result.

Too often in recent seasons Liverpool have gifted chances to the opposition, rather than making them work for them.

Defensive errors have been rife throughout the back four, and positional discipline often seems to be the last thing on players’ minds as they allow themselves to be drawn into unnecessary battles.

A calm considered, punt in to row Z, has as much of a place in this defensive strategy as a classy pass or dribble from the back.

New signing Ragnar Klavan had the fans cheering at Wembley, not for scoring a header from a corner or putting in a crunching tackle on Lionel Messi, but for simply kicking the ball into the stands.

The Estonian also showed great composure on the ball, and in pre-season has epitomised the type of on field decision making which Liverpool defenders have lacked in recent times.

If his form can continue into the season proper, and some of his nous can rub off on his team-mates, he could turn out to be the most important piece of transfer business this summer.

Let’s hope new goalkeeper Loris Karius is another one.

Can Daniel Sturridge stay fit? What happens if he doesn’t? OK, there are two questions here, but whilst it’s cheating the article title somewhat, they’re both wrapped up in one subject.

Just when Sturridge’s injury woes appeared to be a thing of the past, the striker goes and picks up another knock.

No-one really knows what type of injury it is, and even his manager seemed at a loss to explain it when asked recently.

Even the relatively fit players pick up a knock now and again, but when it happens to Sturridge it feels like another major setback.

There’s no doubting the striker’s class, but the fitness has always been an issue and it’s one which has now been raised again. The difference now, is that the squad have a lot more in reserve.

There’s the option of playing Roberto Firmino as a striker or false nine, and the Brazilian is the embodiment the work from the front which Klopp requires.

There’s also the burgeoning all-round talent of Divock Origi – a complete forward in the making.

The young Belgian is the type of striker who’s much sought after in a modern game which requires its number nine to be everything, all of the time. If he starts to knock the goals in at anything approaching Sturridge’s level, then he’ll be on a par with the best players on the continent.

And then there’s Danny Ings. The model professional who fits Klopp’s defensive system perfectly. If he can be as productive on the ball as he is off it, then a returning Sturridge may struggle to get back in the side.

If the main man can stay fit, however, his goals could propel Liverpool to the upper reaches of the league table. No DM, no party – as the famous saying goes. But despite years of negligence in this area of the pitch, do Liverpool really need a defensive midfielder in the current setup?

Emre Can is almost one, but he’s both wasted in the role, and not quite used to the positional aspect of it when defending.

Klopp’s past use of a double pivot suggests that he might revert to this at some point in the season, and this means a change in midfield dynamics.

A deep lying two working in harmony can cover for each other while also protecting the back four, as well as offering an insurance policy for attacking full backs. But, as with the centre back duo, they need to compliment each other.

So far in pre-season Liverpool have used a midfield three; mostly in a 1-2 setup. While the 4-2-3-1 has been Klopp’s go-to plan of action for many years, the midfield three is a good fit for the players in the squad.

However, there’s still the niggling doubt that the deep player in a 1-2 midfield does need to be a specialist defensive midfielder.

The season is long, and full of terrors, so multiple systems will need to be worked on.

A defensive midfielder still feels like the missing piece of the puzzle, but a surprise candidate may emerge from within the squad in the shape of Kevin Stewart, who impressed against Bercelona.

Can the potential be realised? A lot of the positives discussed here rely on individuals reaching their potential within a team unit, as opposed to the use of players who are already at the peak of their powers.

The spine of this team is on the cusp of becoming great, but it’s not quite there yet.

It could be a defining season for the likes of Origi, Emre Can, Jordan Henderson, Mamadou Sakho, and Philippe Coutinho.

If they can improve on some encouraging performances in recent years, then they could propel Liverpool into the top four, and if they’re challenging for the top four then there’s no reason they can’t have their sights set higher up the table.

The strategy of buying potential stars hungry to make the next step isn’t a bad one, and it’s one which suits the club, but if none make the step up then it will rightly be questioned.

There are also a whole host of exciting players coming through the youth ranks, but in a season with fewer games there chances of breaking into the first team will be lower.

If the aforementioned players plus exciting new signings such as Loris Karius, Georginio Wijnaldum, and Sadio Mane can reach the next level, then they’ll take the club with them to Champions League qualification and beyond.