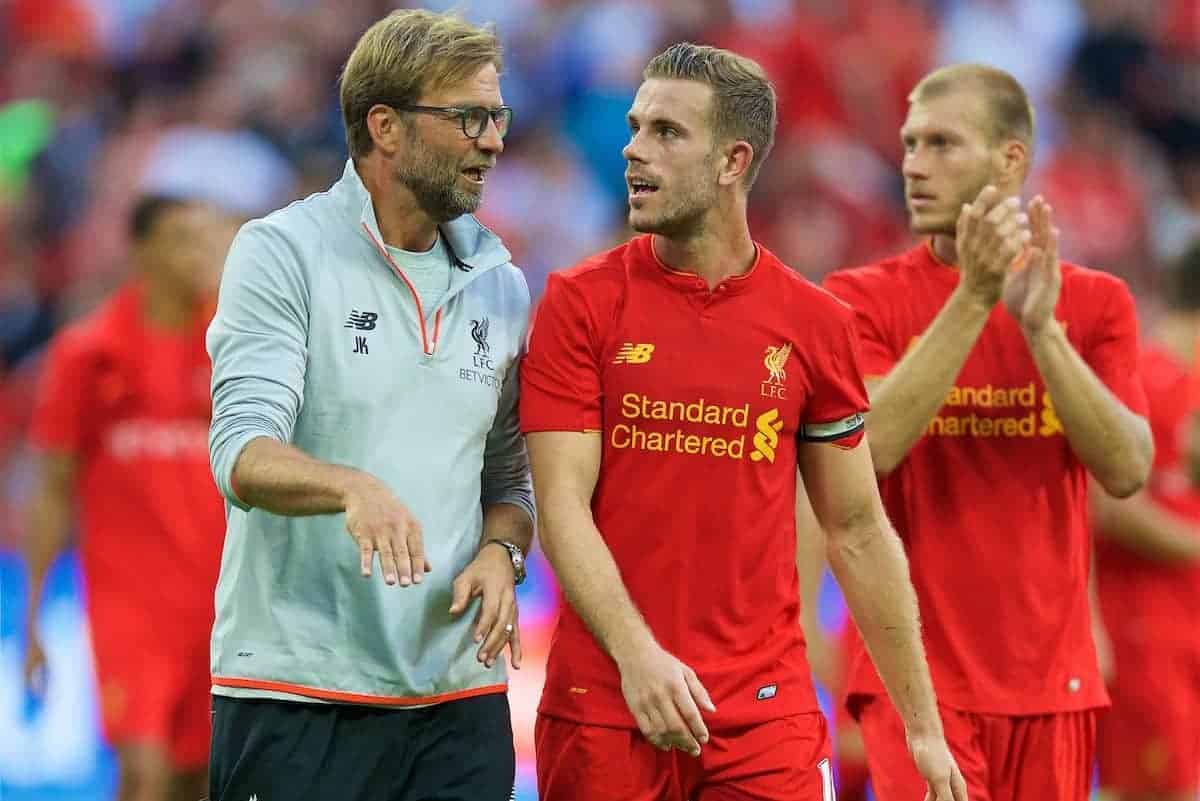 Jurgen Klopp has reiterated his stance over Liverpool’s defensive midfield options, saying that he is “convinced” with his current candidates.

The closing weeks of the summer have been plagued with calls from supporters to sign a new left-back and a defensive midfielder, with no activity in the market planned.

Klopp has used Jordan Henderson and Emre Can in the holding role at the base of his midfield in the Reds’ opening three games of the season so far, to mixed results.

But speaking to reporters at Melwood on Thursday morning, the German said that he was happy with his options in this key position.

“It’s good. We had situations, especially in pre-season, where we played with different players,” he explained.

“Kev Stewart, Lucas Leiva, then of course we had the problem with Emre joining us late, [but] Hendo did really well.

“[Against] Arsenal there was no issue with a holding midfielder, nearly all of the goals we conceded have been when we’ve lost possession.

“You need to have an idea of the player you play the ball to; if you get the ball, you need two or three options.”

This saw Klopp effectively absolve his deep-lying midfielders for five goals conceded over two games against Arsenal and Burnley in the Premier League.

Instead, the 49-year-old stressed the importance of a strong approach from his side as a whole, rather than placing emphasis on the likes of Can or Henderson as the defensive pivot.

“When you try to switch play into the offence, if you lose the ball in that moment, it’s the most difficult to defend,” he continued.

“That’s what we’ve had in the games, in Burnley [too]. For the second goal we lost four challenges in a row—that’s not one player in one position, that’s a big, big mistake.

“Four times to win the ball, we didn’t do it.

“It’s not about a player in a position, it’s about how we can improve in situations like this.

“We need to be harder, not more unfair, but press in the challenge. That’s all.

“It’s not all about changing the player, if we’d all been judged by one mistake in our life, we wouldn’t be sitting here.

“We have to take these weaknesses—there’s no perfect player out there. We are convinced about these players. We have to work together.”

With just one week left of the summer transfer window, Klopp is unlikely to dip into the market for another midfielder, though for Saturday’s clash with Tottenham Hotspur he will be without Can.

The German injured his ankle during Tuesday night’s League Cup second-round win over Burton Albion, and is set to be sidelined for the trip, though Henderson is available.