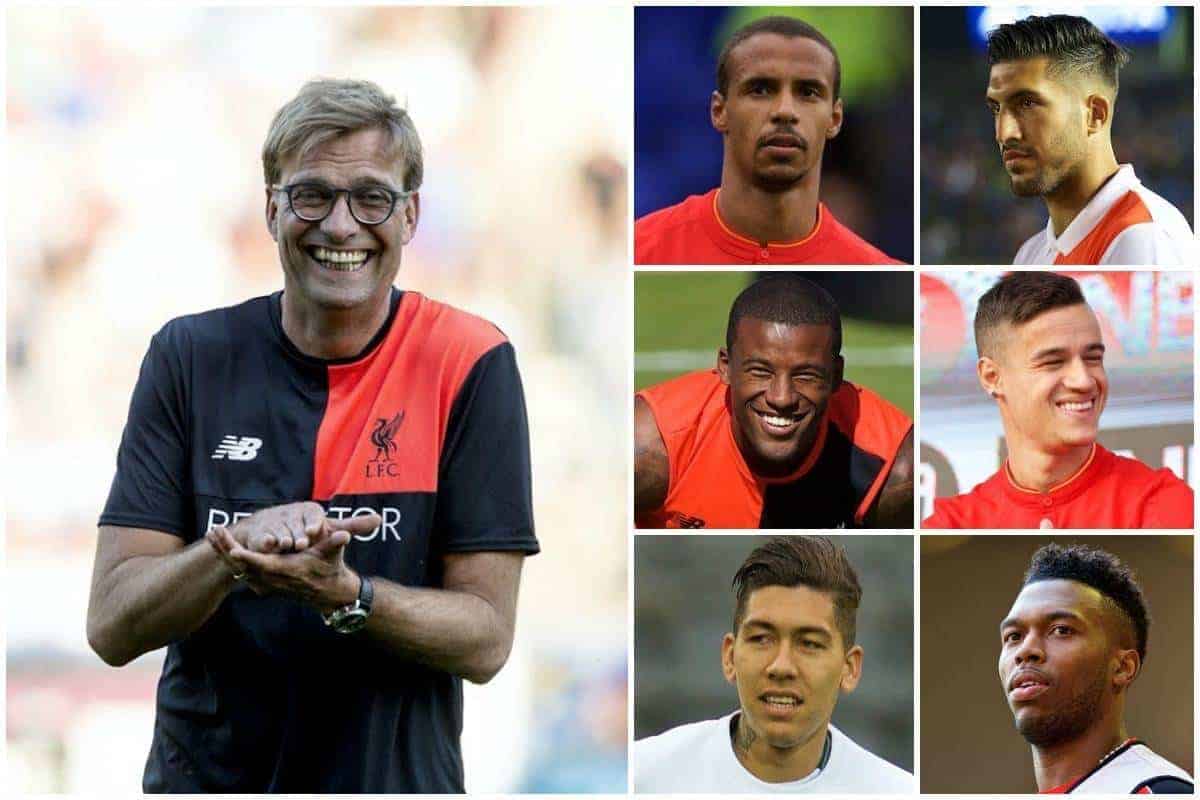 Not since 2000/01 have Liverpool had a more imposing squad, and Jurgen Klopp is just a couple of signings away from an ideal group ahead of the new season.

Throughout the Premier League era, Liverpool have never been particularly adept at having a strong squad all round.

Roy Evans’ team of the mid-1990s had some great attacking quality in Robbie Fowler, Stan Collymore and Steve McManaman, but there was never a huge amount in reserve.

Rafa Benitez produced the Reds’ best side for 25 years back in 2008/09, but once Steven Gerrard, Fernando Torres and Xabi Alonso were missing, it was left to David N’Gog, Andriy Voronin and a young Lucas Leiva to do something.

Invariably, they failed to.

The same applies to Benitez’s 2005 Champions League-winning outfit, who lacked depth, but somehow battled their way to the biggest prize in club football.

The 2013/14 campaign was an absolute joy, but were it not for Gerrard, Luis Suarez and Daniel Sturridge being fit for most of the season, Liverpool would never have come so close to winning the title.

Brendan Rodgers was able to use the likes of Victor Moses, Iago Aspas and Aly Cissokho sparingly, with no European football aiding him in that respect.

The only Reds squad that has had genuine depth flowing through it since the glory days of the late 1980s was Gerard Houllier’s treble-winning team. It didn’t matter who was playing back in 2000/01—you just knew that Liverpool’s starting lineup would have enough ability and steel to get past most sides.

Michael Owen and Emile Heskey were first choice in attack, but Fowler remained a formidable striker, and Jari Litmanen was a majestic, albeit fading, presence.

Liverpool had a huge amount of football to get through that season, and without such a large squad, Houllier’s men would never have secured their historic treble.

Fifteen years on from the Reds’ last great squad, Klopp is working his magic in the transfer window—ensuring his side are poised for an assault on the Premier League‘s top four this season. With no European commitments this season, there is no need for the current squad to have quite the depth of 2000/01, but there are definitely signs that Liverpool will be able to field a strong substitutes’ bench week in, week out.

Additions at full-back are of huge importance, and supporters do have a right to be bemused at reports suggesting Klopp is happy with what he has in that area.

Barring the slight concerns there, it is hard to question the group of players that Klopp has now gradually assembled.

Though he will start the season injured, Loris Karius looks set to be Liverpool’s first-choice goalkeeper on his recovery, and while Simon Mignolet is not particularly popular with the majority of the fanbase, he will be a more-than-able deputy if needed.

Joel Matip, Dejan Lovren, Mamadou Sakho and Ragnar Klavan are a very solid quartet of centre-backs, while Joe Gomez could thrive anywhere across the back line, once fit again.

Lucas, Emre Can, Jordan Henderson, Marko Grujic, Georginio Wijnaldum and James Milner bring respective attributes in the middle of the park, and Milner’s ability to play in several roles, including full-back, can be priceless.

Whereas Adam Lallana became something of a key player last season, chances are he will have to settle for a squad role in 2016/17, such are the improvements made within the squad. Sadio Mane‘s arrival has given the team something different, namely pace, and he seems a certain starter, along with Philippe Coutinho and Roberto Firmino.

Up front, Klopp may not quite have the proven international quality that Houllier did, but Divock Origi and Danny Ings are both very good options to have as an alternative to Sturridge.

Firmino’s ability to lead the line also provides the Liverpool manager with another option, while Christian Benteke is not yet an absolute certainty to leave Anfield.

Throw in youngsters such as Trent Alexander-Arnold, Cameron Brannagan, Kevin Stewart, Ovie Ejaria and Sheyi Ojo, who could predominantly feature in the FA Cup and League Cup, and there is an abundance of players to choose from.

Admittedly, Liverpool’s best possible starting lineup lacks the proven class and experience of 2000/01, but it is refreshing to see plenty of options from the sidelines for the first time in years.

Hypothetically, having a seven-man bench of Mignolet, Lovren, Klavan, Henderson, Lallana, Origi and Ings looks far stronger than anyone Liverpool have had since Houllier worked his magic at the turn of the century.

Some fans are never happy, and will continue to whinge about a lack of quality until the Reds win 38 games straight, but this is now a very strong group of players.

It would be wrong to suggest that this is a squad that couldn’t get any better, but things are certainly heading in the right direction under Klopp.

Should he bring in a new left-back, and perhaps a more defensive-minded midfielder, Liverpool will have their healthiest-looking squad for 15 years.