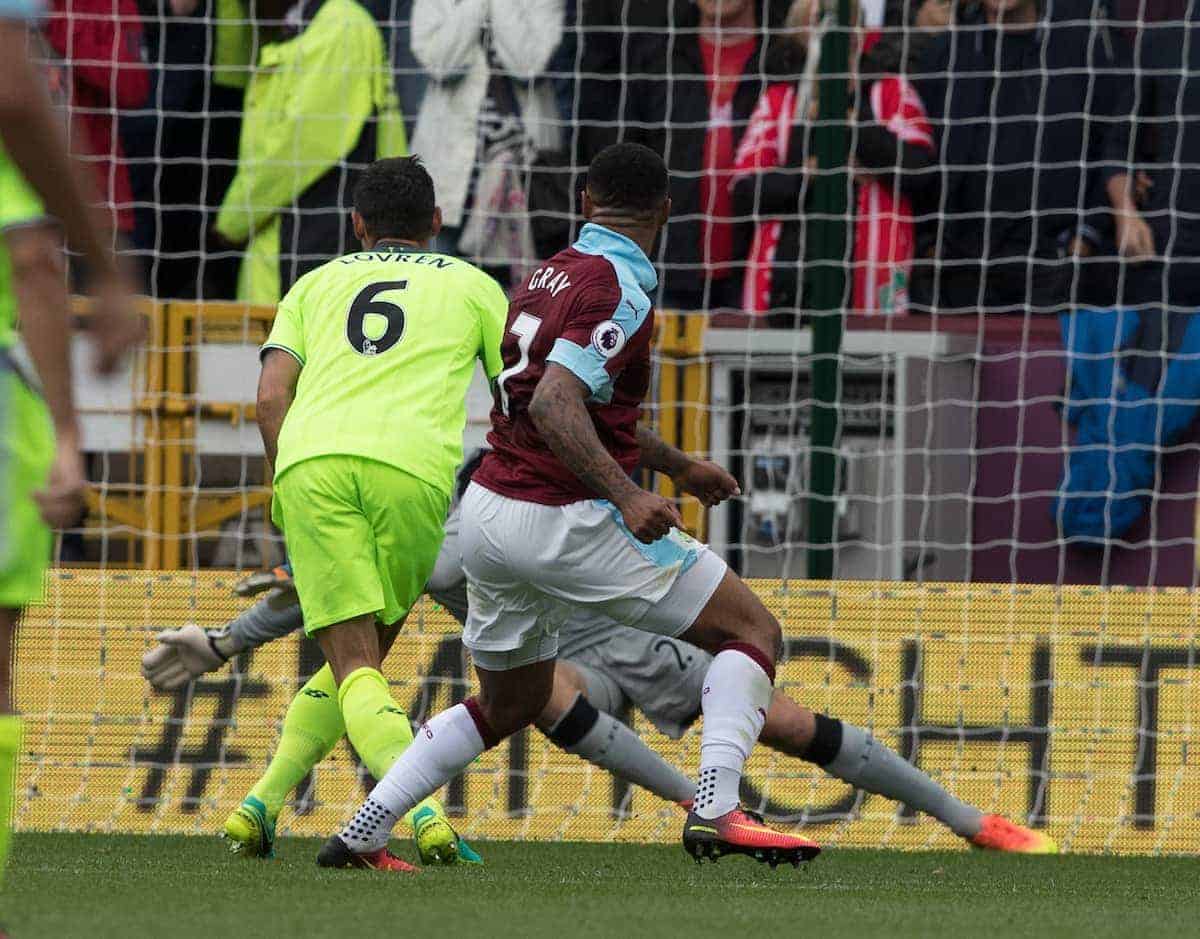 If Liverpool were majestic at times versus Arsenal last weekend then we witnessed their ability to be moronic at a forgettable Turf Moor on Saturday afternoon.

The travelling Kop hadn’t been given a chance to complete a rendition of Poor Scouser Tommy before a mixture of Ragnar Klavan’s inability to clear his lines and a suicidal ball from Nathaniel Clyne enabled a quick ball to Sam Vokes and the Reds found themselves with an uphill struggle 90 seconds into the match.

This quick goal was a gift and one Burnley took full advantage of; Sean Dyche instructed his players to drop, Liverpool found themselves trying to break down a compact and disciplined two banks of four, the signs Liverpool looked unable to do this were evident from 8 minutes; Phil Coutinho with the first of many untested shots from 20-plus-yards.

Further misery piled onto Jurgen Klopp’s players as Burnley were able to counter quickly and establish a two-goal lead on 37 minutes. At a time when Liverpool looked on top it was a reminder that goals change games and you must take your opportunities when they arrive.

There was little more for Liverpool fans to witness as good interlink play created very little and when an opportunity was presented the wrong decision was taken; Coutinho choosing the wrong option from inside the box on 41 minutes.

It was unsurprising that the second half offered no evidence of any sort of comeback; Klopp’s decision to go with Jordan Henderson and Georginio Wijnaldum in midfield must be questioned as both offered little on a day when a creative player could have made all the difference. Emre Can watched on from the sidelines.

Even the return of Daniel Sturridge couldn’t help an abject Liverpool; the England striker, used out wide, had no service but his inability to roll his sleeves up and create his own chances will surely be brought into question. Danny Ings couldn’t even make the bench; his graft and tenacity might have been ideal in this situation.

Liverpool were patient and to their credit used their possession to try and draw Burnley out; the Clarets didn’t fall for it, on the rare occasion they broke their own lines a deep lying creativity was missing from Liverpool’s side.

The world witnessed the very best from Liverpool in 20 superb minutes versus Arsenal; however, Liverpool will need to learn to break down teams who are less open, less likely to play to Liverpool’s strengths if they are to build on last season’s disappointing eighth place.

James Miller was recalled to the side and replaced the much maligned Alberto Moreno at left-back, this will have done little to quell the noise surrounding the position with Milner offering little by the way of forward play; disappointing from all plays he was involved in.

It was evident early on that the 4-3-3 wasn’t the effective way to breakdown a resolute Burnley, had the shape changed to 4-2-3-1 with Firmino behind Sturridge both their afternoon’s could have ended differently – and that of their defensive team mates some 50 yards behind.

Klopp was slow to change things, not just tactically but also with subs – his first not arriving until after the 60-minute mark.

Liverpool need to address their baffling form; it seems to be all or nothing, sometimes within the same 90 minutes. Cries for a dedicated defensive midfielder continue, as do those for a left-back, but Roberto Firmino and Coutinho must offer more on a consistent basis.

Liverpool’s best season in recent memory was littered with an ability to change the game in an instant, to provide that all important lock pick to kick start a Liverpool revival. Both Brazilians must offer more if the memory of a certain Uruguayan is to fade.

Klopp’s record against the big sides is unquestionable but it is the more mundane fixtures against the likes of Burnley that hold the key for Liverpool’s ambitions at a return to the European top table.

12 matches a season against England’s top six must be tempered with an ability to grind out positive results against the rest if Anfield is to welcome a swift return to Champions League football under it’s new Main Stand floodlights.