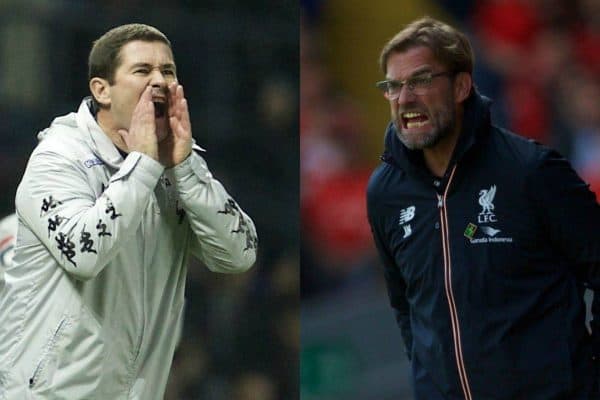 Liverpool begin their League Cup campaign on Tuesday evening, as Jurgen Klopp‘s side head to the Pirelli Stadium to face Burton Albion.

After so much optimism following the Reds’ Premier League opening victory at Arsenal, they came crashing back down to earth on Saturday.

The 2-0 defeat to Burnley was an appalling performance from start to finish, and one that ensured neither the players or Klopp could leave Turf Moor with their heads held high.

A response is needed on Tuesday, as Liverpool switch their attention to League Cup second-round action.

It will be the first ever competitive meeting between the Merseysiders and Burton, in what is sure to be a memorable occasion for the hosts.

The Reds are badly in need of securing a first piece of silverware in nearly five years, in order to bring a winning mentality back to the squad, and the League Cup represents one of their best chances of glory in 2016/17.

Another loss would not go down well, with a return to winning ways very much the order of the day, as Liverpool look to put a stop to a potential early season wobble.

We spoke to Burton fan David Turner (@dturner1997) about his beloved Brewers, and got his thoughts on which Reds players he is wary of.

What are your team’s strengths and what should Liverpool expect?

We have scored 12 goals in our five competitive games so far this season, and we have been one of the most creative forces in the league so far.

What do you think about your manager, Nigel Clough?

I think Nigel has done a fantastic job since he came in, finishing off Jimmy Floyd Hasselbaink’s job.

He has brought entertaining football back to Burton Albion and it’s exciting to see.

Which Liverpool players do you fear ahead of the game?

If they play, Philippe Coutinho, Daniel Sturridge and Roberto Firmino—all pacy, dangerous threats to any team.

I would have to say Divock Origi is also a threat, due to the natural speed and goalscoring ability that he has shown in the past.

Given the depth within Klopp’s squad now, and the fact Liverpool face Tottenham Hotspur away in the Premier League on Saturday, there could some rotation on Tuesday evening.

However, speaking ahead of the trip to Burton, Klopp insisted he would “make changes but not big changes.”

A number of youngsters could hope to feature, including Trent Alexander-Arnold and Kevin Stewart, while the likes of Joel Matip, Emre Can and Divock Origi should all start, in order to improve their match fitness.

Danny Ings is one who has gone off the radar so far this season—he has appeared for the U23s, having not made the senior matchday squad—and the striker may again struggle to be included.

There are no fresh injury concerns for the Liverpool manager to contend with, although Loris Karius, Mamadou Sakho, Joe Gomez, Lucas Leiva and Sheyi Ojo are still not ready to return.

Cameron Brannagan is unlikely to feature, having travelled with the U23s for Monday night’s clash with Chelsea, while Sadio Mane should not be risked.

Klopp will be very aware of a possible backlash if his side were to lose to Nigel Clough’s high-achieving outfit, so some senior figures should still feature prominently throughout the evening.

Away fans pubs: The Beech Inn, around a five-minute walk from the ground, The Great Northern Pub on Wetmore Road, as well as drinks being served in the ground too.

The 49-year-old revealed that he had done his homework on his Championship opposition, in hope of countering their “clear style of play.”

“We’ve analysed Burton and, I have to say, the Championship—I really like this league,” he explained.

“Another good team with maybe not the best start but spectacular results like the 4-3 with Norwich, an unlucky defeat.

“A nice story, they went the last two, three years getting promoted each year, and that’s pretty good.

“Experienced manager, clear style of play, I would expect a 3-5-2 system like they’ve played in the last few games. So, of course we respect the opponent.”

One To Watch: Stuart Beavon

Although a relative veteran at the age of 32, Stuart Beavon has been a key man for Burton since joining from Preston North End in 2014.

The striker has won back-to-back Player of the Year awards for the Brewers, with his unselfish style of play endearing him to the hearts of his supporters.

The diminutive Beavon has been something of a journeyman throughout his career, but it looks as though his peak years are coming in his 30s.

UK viewers can stream live on Sky Sports 1 via NOW TV — Get 10% off a one-day sports pass here! or get 10% off a week sports pass to enjoy tonight’s match and Tottenham vs. Liverpool on Saturday!

US viewers can stream live on beIN SPORTS via FuboTV — Get a 24 hour free trial here!

This is Anfield will have live coverage throughout the night. Download the This Is Anfield app for free here.