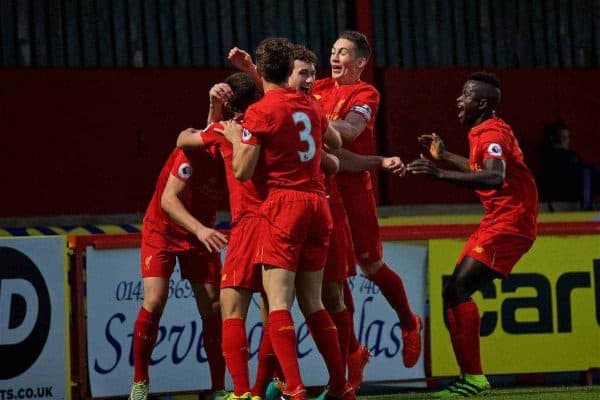 Liverpool’s U23s cruised to a 6-2 victory away to Tottenham‘s U23s on Monday evening, with the Reds 4-0 up by half-time.

Having taken apart Leicester City 4-0 in their last outing on September 11, just as the Liverpool first-team had a day earlier, Michael Beale’s side took on Spurs at Stevenage’s Lamex Stadium.

There was no place in the starting line-up for Danny Ings, which perhaps suggests he is set to feature for the Reds against Derby County in the League Cup third round on Tuesday.

Kevin Stewart did start, however, despite being a regular member of the first-team squad this season, while man-of-the-moment Ben Woodburn was again hoping to shine.

Other notable absentees were Connor Randall, Pedro Chirivella and Ovie Ejaria, all of whom will hope to make an appearance at Pride Park.

Liverpool made a remarkable start to proceedings, scoring three times in the opening eight minutes.

After what must have like some welcome respite for the hosts, Liverpool got a fourth in the 33rd minute, courtesy of a superb 25-yard effort from Trent Alexander-Arnold.

11 minutes into the second-half, Spurs gave the scoreline a minor bit of parity through Marcus Edwards, but it was about all they could muster.

With 10 minutes remaining, Brannagan made it 5-1, with the midfielder firing into the top corner to get his second goal of the evening.

The icing on the cake was then delivered by substitute Brooks Lennon, in what was an absolutely emphatic display from Beale’s men.

Loft added a penalty for the home side deep in stoppage time but nothing could take the shine off the young Reds’ emphatic victory.

It is now three wins on the bounce for the Reds’ youngsters – four if you include the 6-1 friendly win over Qatar last Wednesday – who are going from strength to strength as the season progresses.