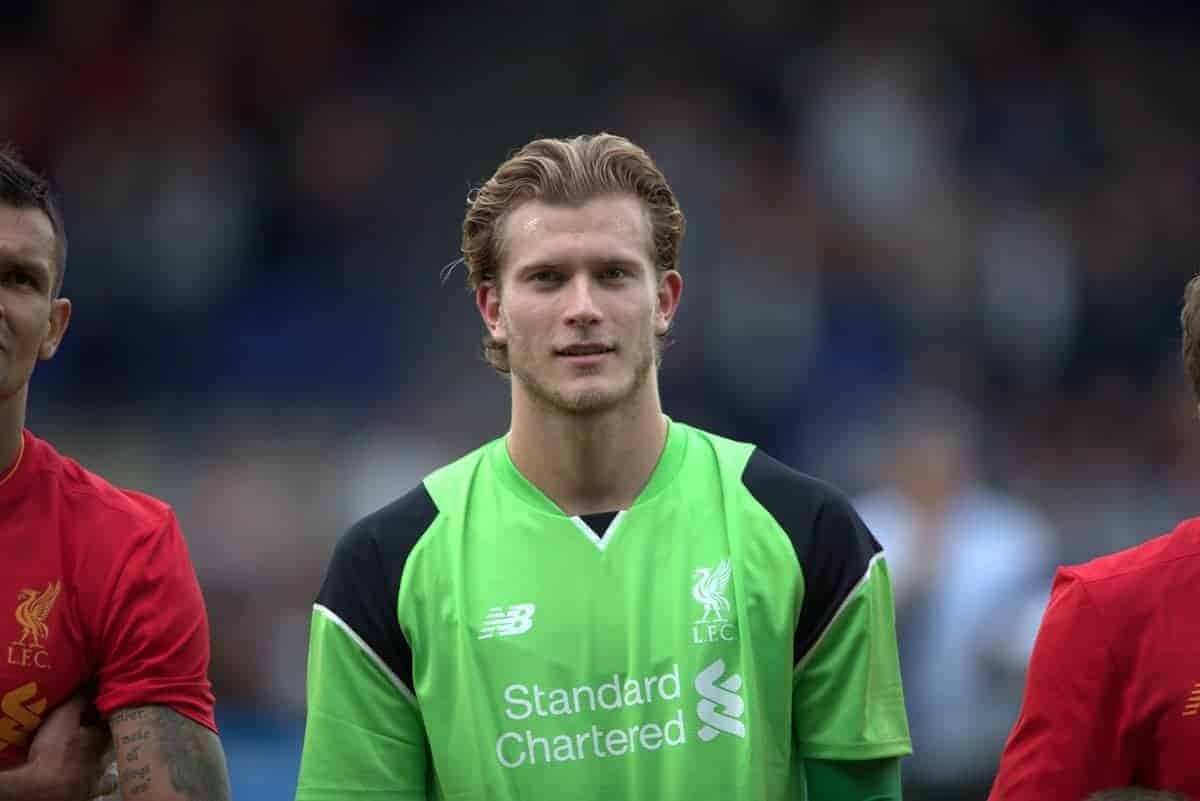 After recovering from injury, Liverpool goalkeeper Loris Karius is primed to take his place between the sticks against Derby County in the League Cup.

Breaking his hand during pre-season, Karius was sidelined for the first four games of 2016/17, making his first appearance on the substitutes’ bench at home to Leicester City, and then away to Chelsea.

Signed for £4.7 million from Mainz 05 this summer, Karius adopted the No. 1 shirt on his move to Merseyside, signalling his intent to become Klopp’s first-choice goalkeeper.

But with injury stalling his start to life at Liverpool, Klopp has been forced to slow his introduction to competitive action.

Mignolet spent much of the 2015/16 campaign with his position under question from supporters, as following the signing of former Bolton Wanderers goalkeeper Adam Bogdan on a free transfer, the Belgian was undisputed first choice.

Injury to Karius has left Mignolet in the same position for the start of 2016/17, too. With Danny Ward leaving to join Huddersfield Town on loan and summer signing Alex Manninger little more than an experienced deputy, he has become Klopp’s de facto No. 1.

Fortunately, this has led to a host of positive displays, with Mignolet largely acquitting himself well between the sticks in what has been a testing start to the season.

He saved a Theo Walcott penalty in the Reds’ opening-day victory over Arsenal, kept the only clean sheet of the season so far away to Burton Albion in the League Cup and produced a number of fine saves away to Tottenham Hotspur.

But despite this, there have been some familiar failings in Mignolet’s game, as when beaten at the near post for Danny Rose’s equaliser at White Hart Lane and playing a confusing, heavy pass to Lucas Leiva in the buildup to Jamie Vardy’s consolation strike for Leicester at Anfield.

Most prominently, Klopp could be seen furiously lamenting Mignolet’s poor distribution at Stamford Bridge, turning a comfortable situation into a desperate shanked clearance in seconds.

Mignolet is an adequate Premier League goalkeeper, whose shot-stopping prowess has already aided Liverpool on a number of occasions this season, but he is not the calibre Klopp requires to move forward successfully.

Conveniently, Klopp has a challenger on the rise, with Karius’ return from injury providing a solution in his ideal mould of No. 1.

“I wanted the No. 1 shirt because I was wearing it at Mainz,” Karius proclaimed on his arrival on Merseyside, taking the shirt previously worn by Brad Jones, “and I want to be the No. 1 here at Liverpool.”

The former Manchester City youngster displayed a profound self-confidence from the moment he signed his Reds contract—and rightly so, as Mainz season-ticket holder Conor Garratt told This is Anfield in May.

“Karius was recently voted by Bundesliga players as the second best goalkeeper of the season behind Manuel Neuer in the sport magazine Kicker, which says a lot about what you need to know,” Garratt explained.

“Karius really should be able to replace Mignolet, or a fair few other Premier League first-choice keepers, straight off the bat.”

Barring a misstep in Liverpool’s 2-0 win away to Wigan Athletic in pre-season—fittingly dubbed by many as a “Mignolet moment”—Karius showcased this potential throughout the summer. The German kept clean sheets against Tranmere Rovers, Fleetwood Town, Wigan and Huddersfield, before breaking his hand during the Reds’ 1-0 defeat to Chelsea on their tour of the United States, and while those domestic fixtures were far from testing, his displays were promising.

Notably, Karius performed with a front-footed defensive outlook, quick off his line to snatch up any loose balls, and was also composed in possession and strong in stopping shots.

The 23-year-old could be heard booming instructions towards his defence, with this self-confidence painting him as the antithesis to Liverpool’s wallflower, Mignolet.

As Manninger explained during pre-season, this is what Klopp wants: “A modern goalkeeper who makes the game as quick as possible.”

Perhaps simply, Klopp isn’t looking for a goalkeeper who concedes a free-kick inside his own penalty area for taking too long to launch a goal kick, and away to Derby, he can put this into action. It is unlikely that Klopp will make wholesale changes for Liverpool’s trip to Pride Park, having only made four for August’s clash with Burton in the previous round.

But introducing Karius against Derby could be a sensible move, allowing him vital preparation time against a weaker side—just as Klopp did in handing Joel Matip his competitive debut at the Pirelli Stadium.

So far this season, Derby have scored just four times in 10 games, with two of those coming in their last five outings and no player notching more than one goal.

These goals have been shared between left-back Craig Forsyth, centre-back Richard Keogh, winger Ikechi Anya and centre-forward Darren Bent, with a lack of consistency in front of goal hampering Nigel Pearson’s start to life in Derbyshire.

Attempting to translate the style that made him a success with Leicester, Pearson has seen his Derby side average 75 long balls per Championship game so far this season—by way of comparison, level with Burnley in the Premier League.

To counter this threat, Liverpool could benefit from calling upon a front-footed goalkeeper able to read direct attacks and quell any danger before it mounts.

In this regard, Karius would be a better choice than Mignolet, and this less-demanding fixture would provide him with a solid bedding-in period and a chance to test his mettle in the No. 1 shirt.

After Derby, Liverpool take on Hull City at Anfield, where Karius can then make his league debut against a side with a distinctly refined, agricultural style of football.

Rid of the demands of away trips to Arsenal, Spurs and Chelsea, Karius can now take the reins from Mignolet.