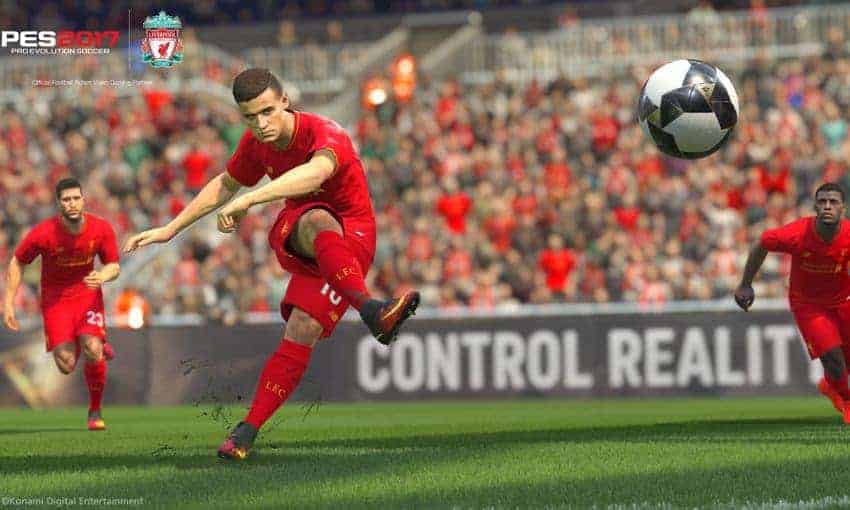 Pro Evolution Soccer (PES) 2017 is released on Thursday, much to the excitement of many, and it is three of Liverpool’s attacking players who are rated higher than their fellow Reds teammates.

With Liverpool having entered into a partnership with Konami that will see LFC players past and present, together with Anfield Stadium digitally reproduced, Liverpool supporters have been eager to see how their heroes are assessed and look in the game.

Daniel Sturridge, Philippe Coutinho and Roberto Firmino have the joint-highest rating of all the Liverpool squad members, with the attacking trident all rated as 83.

New signing Sadio Mane is 80, but if his outstanding current performances are anything to go by, he will be threatening his teammates’ score come this time next year. Adam Lallana has the same mark as Mane.

In goal, Loris Karius (80) is rated just above Simon Mignolet (79), while Nathaniel Clyne (81) has a deservedly superior rating to fellow full-back Alberto Moreno (78). The ever-versatile James Milner is given a score of 80.

In midfield, Lucas Leiva (80) is rather bizarrely rated higher than Emre Can (77), while captain Jordan Henderson (80) is just as strangely only on a par with the Brazilian.

Of all the Liverpool players’ ratings, Can’s is the most harsh.

Former Newcastle man Georginio Wijnaldum is 81, which given his fairly subdued performances for Liverpool so far, is perhaps something of a surprise.

Lionel Messi (94) and Cristiano Ronaldo (93) are, predictably, the best attacking players on the game, although former Liverpool man Luis Suarez (92) is third.

* PES2017 is out today, you can purchase for PlayStation and Xbox here.