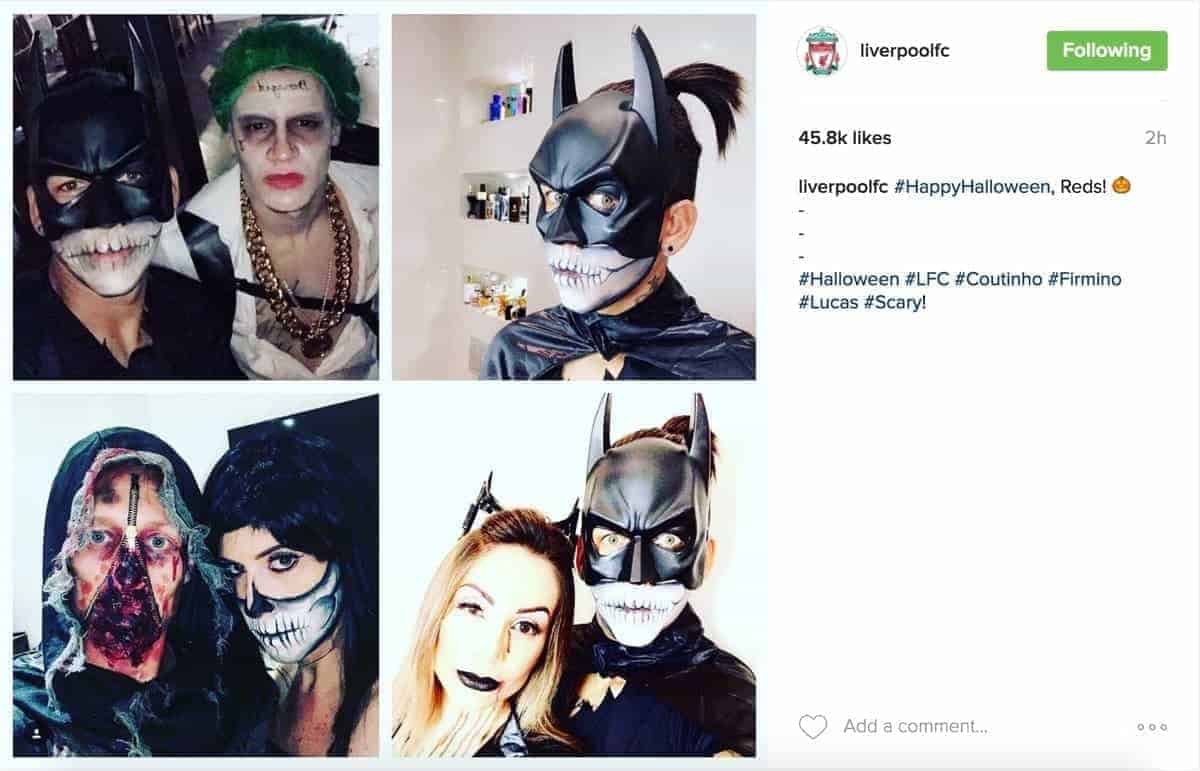 Halloween is upon us once again, and some of Liverpool’s players spent their Sunday evening celebrating the annual event.

Halloween isn’t the most universally loved day of the year, with people celebrating the pagan festival to varying degrees around the world.

It is always a colourful occasion, however, with many dressing up in scary attire and attending social gatherings.

Liverpool’s 4-2 win over Crystal Palace on Saturday was yet another great result for Jurgen Klopp‘s side, and several of his players appeared to be in the party spirit on Sunday.

It was the Brazilian trio of Roberto Firmino, Philippe Coutinho and Lucas Leiva who stole the show, taking to social media to showcase their choice of costume for the night.

Fresh off the back of his beautifully taken effort at Selhurst Park, Firmino decided to go part-Batman and part-Skeletor… Coutinho has been in mesmeric form, with his recent performances far more well-received than the much-criticised Suicide Squad earlier this year.

That didn’t stop him dressing up as the blockbuster’s incarnation of the Joker, though… Lucas shared a number of photos of him and his young family, with the 29-year-old almost unrecognisable in a grotesque choice of costume… Liverpool fans couldn’t help getting involved too, with a former manager taking a bit of a battering…

This child dressed up as Klopp for Halloween ? could be one of the best outfits we've seen ???? #LFC (pic via @piesportsbooze) pic.twitter.com/6XsylE3XdT

Halloween nightmare. Hodgson is back in Liverpool, sniffing his fingers in his LFC trackie (actual trackie with Hodgson DNA) pic.twitter.com/zMJgQ44DzE

My LFC pumpkin from a few years back.. didn't get time for one this year ? #LFC #Liverpool #LiverBird #YNWA #PremierLeague pic.twitter.com/s8JCaaK0FG