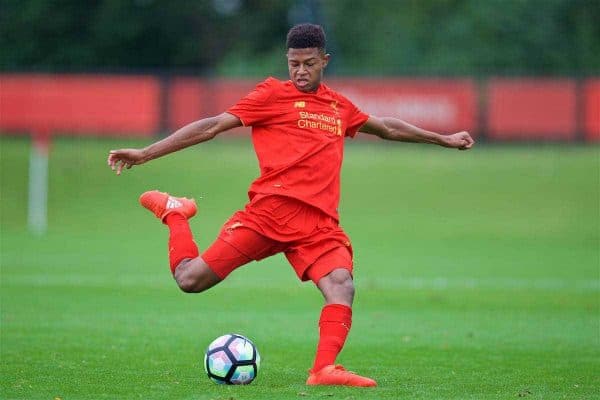 Liverpool academy star Rhian Brewster was in fine form as the England U17s took three wins from three games in the Croatia Cup.

Brewster was the only Reds youngster called up to Steve Cooper’s squad for the three-game tournament, but highlighted why he was considered a high-potential talent on Merseyside.

The 16-year-old forward joined talent from the likes of Manchester City, Manchester United and his former side, Chelsea, for clashes against Croatia U17s (September 28), Greece U17s (September 30) and finally Germany U17s (October 3).

Taking no time to make his mark on the international stage, Brewster hit five goals in three appearances, with the young Lions going unbeaten in Croatia.

Leading the line for England’s opener against the host side, Brewster struck twice before half-time and once more after the interval to help seal an emphatic 5-0 victory.

Jadon Sancho, of City, and United’s Angel Gomes scored the others, handing Cooper a positive start to the friendly tournament.

Cooper dropped Brewster and Sancho to the substitutes’ bench for England’s clash with Greece two days later, but the Liverpool star was brought on for a second-half cameo, replacing Reading’s Danny Loader with his side already two goals up, on their way to a 3-0 win.

Finally, taking on Christian Wuck’s Germany at the Stadium Aldo Drosina in Pula, England ended the tournament with an excellent 8-1 victory.

Brewster scored twice in four first-half minutes in that win, bringing his tally for the Croatia Cup up to five goals in just three appearances, and given the rigours of the five-day schedule, this is hugely impressive.

The forward has shone for the Liverpool U18s already this season, and looks set for a bright future under the likes of Neil Critchley, Michael Beale and, potentially, Jurgen Klopp.