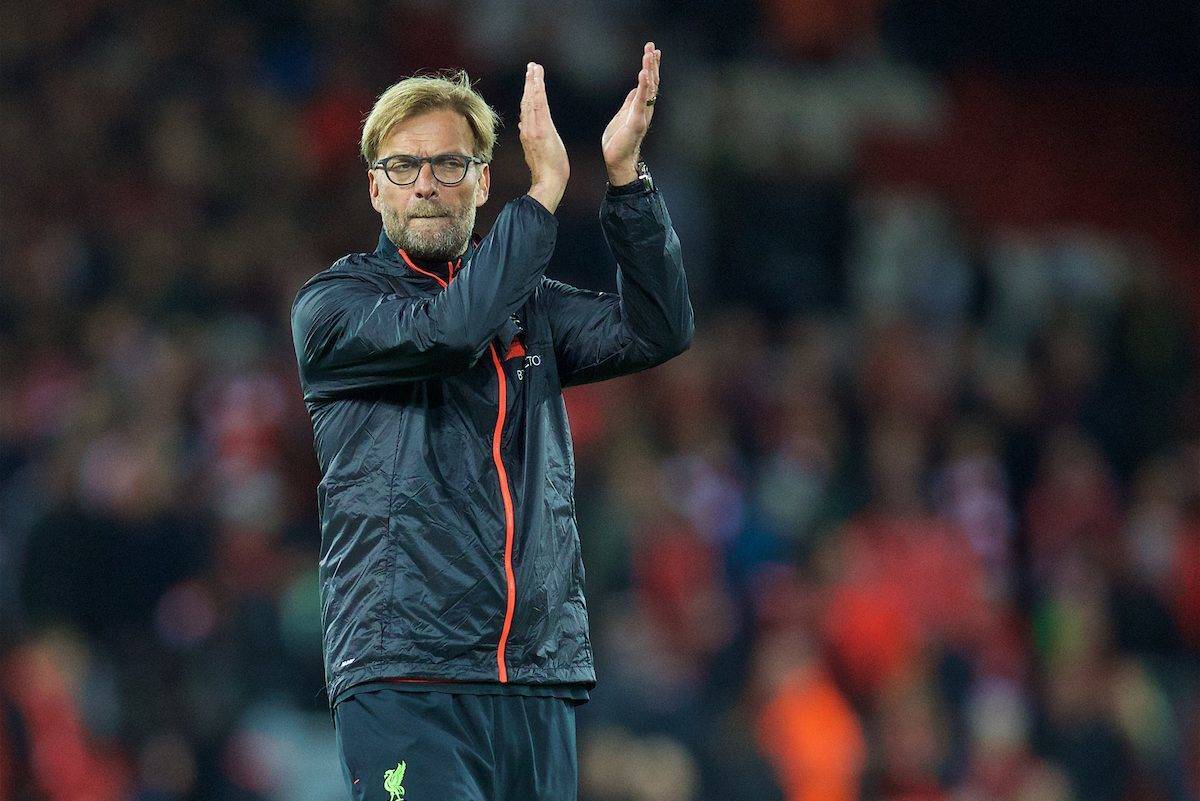 Liverpool were held to a 0-0 draw by rivals Manchester United on Monday night, with much for Jurgen Klopp to dwell on at Melwood.

The most hotly anticipated fixture of October, this Anfield clash proved to be little more than a damp squib, as Jose Mourinho successfully frustrated Klopp’s Reds on their own turf.

Emre Can and Philippe Coutinho went closest for Liverpool, but an inspired David de Gea was able to keep their attempts at bay.

This leaves the Reds fourth in the Premier League table, and though as a result little has changed since their 2-1 victory over Swansea City last time out, Klopp will have learned a lot about his side.

Here are five talking points from the stalemate, including a mixed showing from Liverpool’s back line.

As is typical of Mourinho in big-game situations, United were set up to stifle Liverpool’s attacking threat at home, and the Portuguese look to go route one in attack.

Ashley Young made his first league start since January on the left flank, while Zlatan Ibrahimovic, Paul Pogba and Marouane Fellaini were all fielded in a lofty United lineup.

The gameplan was clear: hit the ball out to Young whenever possible, and let his crossing ability, and Ibrahimovic’s aerial prowess, do the rest.

Furthermore, Matip showed his progressive qualities in stepping out of defence in possession, and almost registered an assist after a powerful run, feeding Can for his attempt on 58 minutes.

However, while Matip was in excellent form at the back, his goalkeeper, Loris Karius, continued to provide a shaky presence between the sticks, providing his premature critics with further fuel.

The German continually flapped at crosses in the box, and made one major error passing out from the back, with Liverpool fortunate that Ibrahimovic was in an offside position when receiving the resulting pass.

Speaking ahead of the game, Karius admitted this would be the “biggest” game of his career, saying “we have respect for them but we’re not scared of them and we know we want to win the game.”

Karius didn’t quite look up to the task at Anfield, however, though it remains early days for a 23-year-old making only his third start for his new club in the Premier League. Klopp will have been disappointed not to be able to name Adam Lallana in his starting lineup, with the midfielder having suffered a groin injury in Liverpool’s last outing away to Swansea.

Though the ability to field Can and Daniel Sturridge in place of Lallana and fellow absentee Georginio Wijnaldum highlighted the strength in depth at Klopp’s disposal, the Reds were clearly lacking their energy.

Introducing Lallana on the hour mark, with the No. 20 taking Sturridge’s place after a sluggish performance from the striker, Anfield saw a marked improvement in Liverpool’s output.

Suddenly, they were able to press with their trademark tenacity, and their forward moves were more fluid, with Lallana interchanging freely with Coutinho, Roberto Firmino and Sadio Mane.

Lallana’s progression from also-ran to vital cog has been remarkable, and this cameo display only strengthened his case.

100 and Out For Centurion Sturridge? Lallana’s injury gave Sturridge the opportunity to make his 100th appearance for Liverpool, and after netting his 100th goal for club and country during the international break, he will have been eager to maintain his positive run.

Stationed at the tip of Klopp’s attack in his 4-3-3 formation, however, Sturridge was marooned, unable to change the course of the game as Mourinho’s steely defensive setup prevailed.

While the blame cannot land solely at Sturridge’s feet for Liverpool’s lack of vibrancy in the first hour, his paltry contribution certainly played a big part.

It was telling that Klopp opted to move Firmino into the No. 9 role on Lallana’s introduction, rather than replacing Sturridge with another substitute in Divock Origi.

The Liverpool manager simply trusts Firmino to get the job done in this demanding role, and with Sturridge once again struggling to impose himself from the start, his status continues to dwindle.

Schedule Opens Up For Reds After Tough Test While the buildup to this fixture demanded victory for either side, a valuable perspective on this Anfield stalemate is that Liverpool have extended their unbeaten run at a crucial stage.

The Reds have now gone seven games, and almost two months, without suffering defeat, despite having played Tottenham Hotspur, Leicester City, Chelsea and now United, among others.

Looking ahead, Liverpool will now prepare themselves for a much more favourable stretch in the Premier League.

Their next clash is against West Bromwich Albion (home), to be followed by Crystal Palace (away), Watford (home), Southampton (away), Sunderland (home), Bournemouth (away), West Ham United (home) and Middlesbrough (away), before a tough derby clash away to Everton on December 19.

Already on 17 points from a possible 24, on paper Liverpool should hope to do better than that over their next eight games.