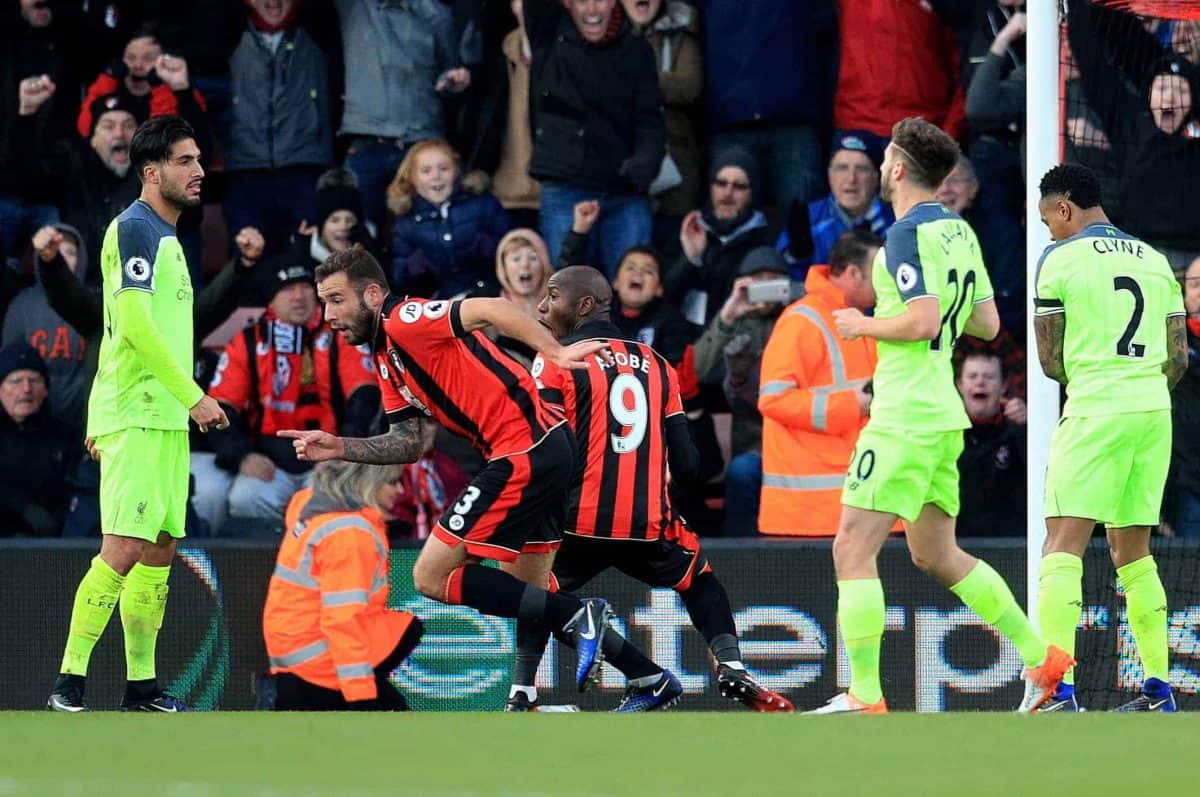 Liverpool twice let a two-goal lead slip as they fell to a frustrating 4-3 loss away to Bournemouth on Sunday afternoon.

After sealing their place in the League Cup semi-finals with a 2-0 victory over Leeds United on Tuesday night, Liverpool returned to Premier League action to take on Eddie Howe’s Bournemouth.

The Reds’ trip to Dorset saw them look to extend their unbeaten run to 16 games, and continue their battle at the top end of the table, following Chelsea‘s 3-1 win away to Man City on Saturday.

Despite injury to Philippe Coutinho and Daniel Sturridge, Jurgen Klopp was able to field a formidable Liverpool side, including Sadio Mane, Roberto Firmino and Divock Origi, who had scored in his last two outings.

The Cherries welcomed Klopp’s side to Dean Court on the back of a disappointing 3-1 defeat to fellow title challengers Arsenal, and gave Liverpool a rough ride on the south coast.

With the travelling Kop fuelling a raucous atmosphere at Dean Court, Liverpool looked to push forward quickly in the opening stages, with Firmino enjoying the lion’s share of possession in attack.

It was his attacking partner, Origi, who came closest in the first 10 minutes, however, with the Belgian somehow poking the ball wide after Nathaniel Clyne found him in front of an open goal.

Eleven minutes later, Liverpool broke the deadlock, with Mane running onto Emre Can‘s excellent lofted ball, before holding off Nathan Ake and slotting past the onrushing Artur Boruc to make it 1-0.

A mistake from Boruc handed Liverpool their second, with the Pole charging from his line to challenge for Jordan Henderson‘s forward ball, but with Origi beating him for pace, Bournemouth goal was open for the No. 28 to produce a wonderful finish from a tight angle.

Bournemouth were later denied a convincing penalty call as Ake went down under a challenge from Firmino, but referee Bobby Madley waved the Cherries’ appeals away and Liverpool played the rest of the half out with a two-goal lead. With Bournemouth lacking in the first half, Howe sent on former Reds winger Jordon Ibe at the interval, with the No. 33 looking to make his mark against his old club from the right flank.

It was another substitute, Ryan Fraser, who made the impact for the Cherries, however, with the 22-year-old bundled over in the box by James Milner, with Callum Wilson stepping up to convert the penalty.

With Klopp roaring them on from the technical area, Liverpool continued to press forward, and were rewarded following a persistent run from Mane, with the Senegalese laying the ball off for Can to curl home from the edge of the box.

This proved to be Mane’s last contribution, with Klopp bringing on Adam Lallana after a three-game spell on the sidelines with a groin injury.

It wasn’t over at Dean Court, however, with some comical defending from the Reds allowing Fraser to fire it past Loris Karius on 76 minutes, before Steve Cook hammered home to make it 3-3.

With Madley keeping one eye on his watch, an awful spill from Karius gifted Ake a goal in stoppage time, ending Liverpool’s 15-game unbeaten run in abysmal fashion.