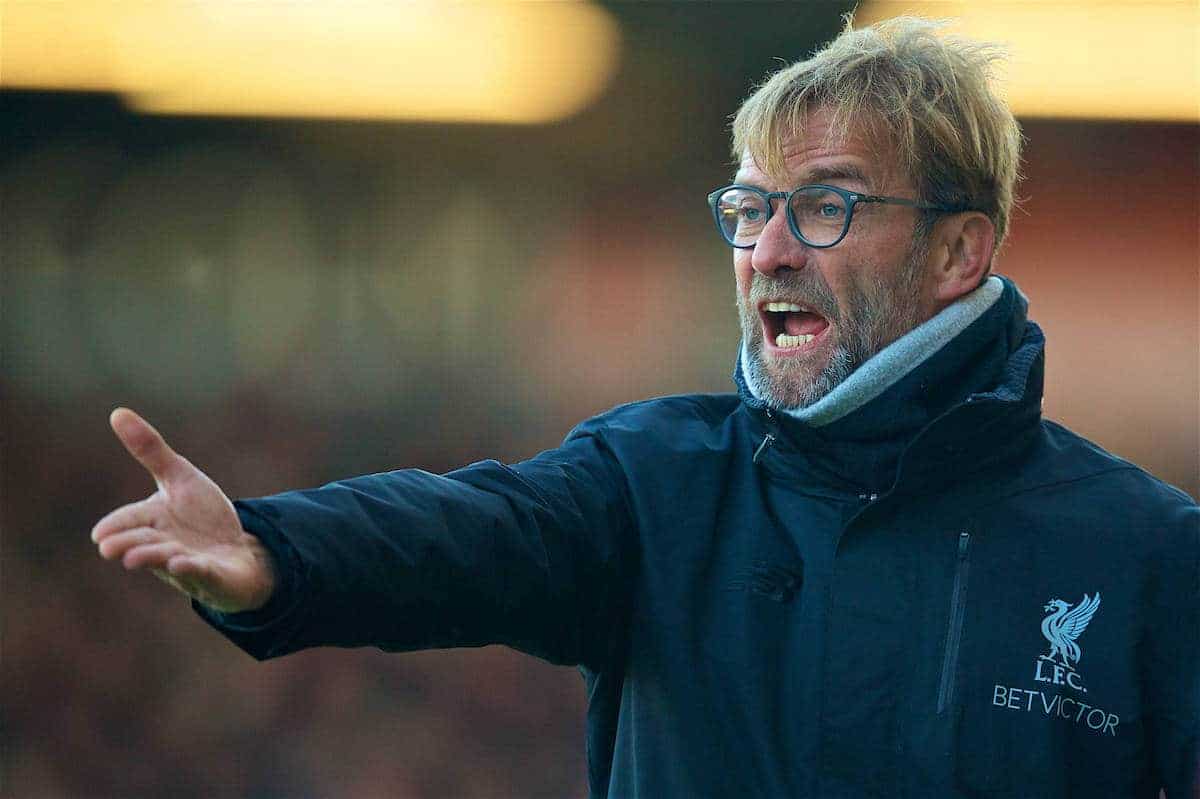 Liverpool host a struggling West Ham side in the Premier League on Sunday, in the Reds’ penultimate home game before Christmas.

It has been a long week stewing over the horrors of last Sunday’s 4-3 defeat to Bournemouth.

Liverpool may have fallen apart in alarming fashion at Dean Court, but it is imperative that they bounce back immediately from that disappointment.

Jurgen Klopp‘s side remain just four points adrift of leaders Chelsea, and one defeat shouldn’t change what has been an excellent start to the season.

Next up is the visit of West Ham—a side really finding it tough this season, having enjoyed such a positive 2015/16 campaign.

Slaven Bilic is under increasing pressure, with the Hammers now sitting just one point and one place above the relegation zone.

Their 5-1 loss at home to Arsenal a week ago highlighted their flaws to perfection, as their struggles in new surroundings at the Olympic Stadium continue.

All things point towards a comfortable home victory for the Reds, but as last weekend showed, the Premier League can be impossible to predict. Three points are a must. We spoke to West Ham supporter Sean Whetstone (@westhamfootball) to get his thoughts on the Hammers’ campaign, and their chances of springing a surprise this weekend.

What do you make of West Ham‘s season so far? How much of a surprise has your poor form been?

The R word wasn’t even mentioned prior to the season starting and most West Ham fans believed we were set for a top-10 finish this season. We now find ourselves one point and one position above the relegation zone asking ‘where did it all go wrong?’.

There is no simple answer but a perfect storm of a number of factors which have culminated in a slump in form. Moving stadium and training ground hasn’t helped but it would be wrong to blame it solely on that.

It’s Slaven Bilic’s tricky second season and questions have been asked about his insistence to play Michail Antonio at right-back at the start of the season and some of his substitutions.

The training regime has also come into question, as have his background staff. Bilic allows wives, girlfriends, children and pets to occasionally come to the training ground and that has lead to questions over whether he is too soft.

To say our summer signings have been disappointing is an understatement, coupled with our star players such as Dimitri Payet and Cheikhou Kouyate dropping in form.

We have too much reliance on Payet, and Bilic has built the team around him. We have our injury problems, as have Liverpool—football is confidence game and it is currently low in the players, board and the fanbase. Right now I would accept 17th, which would keep us up.

Payet is a funny one at the moment—is he a shadow of the player that lit up the Premier League in 2015/16?

You are not wrong. He looks overweight, we are told he doesn’t have the same intensity as last season in training and he looks disinterested on the pitch during games. He did the same last season during certain games but everyone remembers his great games, scoring nine goals and making twelve assists.

We remember him for those amazing free-kicks last year. It was like he couldn’t miss, and conceding a free-kick within his range was like conceding a penalty for opposition teams.

This season he has just one goal and five assists, but he still creates many chances and remains one of the most consistent in the Premier League in that department.

Looking ahead to Sunday, which Liverpool players do you feel can hurt you the most? And how do you rate the Reds’ title chances?

I am sure West Ham will be wary of your top scorers. Unlike many teams your goals come from a number of different players.

I see Mane has scored seven in the league so he will have to be well marked, but Firmino and Milner have both scored five each in the league. Let’s hope they all have a quiet day on Sunday.

West Ham have conceded 29 goals so far this season so I am hoping we don’t add to that tally. The league title is wide open this season so Liverpool have an outside chance to win it.

The only question mark is the loss against Bournemouth last week. Without wanting to sound harsh, to concede a 3-1 lead and lose the match 4-3 is not the trait of wannabe league champions.

What’s your prediction, both in terms of the scoreline and how the match will pan out?

Prior to last season, the Beatles were at No. 1 with ‘She Loves You’ when West Ham last won at Anfield. The previous win was courtesy of goals from a then-unknighted Geoff Hurst and Martin Peters. Forty-two times since that 2-1 win in September 1963 we failed to win, until we broke our duck with an amazing 3-0 victory last season, which was a sign of things to come.

We went on to do the treble over you by winning two games at the Boleyn Ground. However, history is unlikely to repeat itself this season and we may need to wait for another 52 years before our next win, the way we are currently playing.

I would imagine Bilic will set up quite defensively to stop you playing your game, but you will enjoy at least 65 percent of the possession. Our shots on target will be four times less than yours but we will hope to stand tall and defend for our lives and hope to catch you on the break.

If we do score a goal, expect it to come from Andy Carroll through a set-piece—either a free-kick or a corner from a Payet delivery.

I hate predicting a loss for my own team so I will go for a 1-1 draw. I will happily take and respect that point.

Klopp has been boosted by the news that Adam Lallana is fully fit again, and he is expected to start at Anfield.

The 28-year-old returned last weekend at Bournemouth, but looked understandably rusty in his second-half cameo. It’s a huge bonus having him back.

Joel Matip was a big loss against the Cherries, but he is also available, and should come straight back in for Lucas Leiva.

Philippe Coutinho is still out, and will be for the foreseeable future, while Daniel Sturridge still hasn’t recovered from a calf injury.

Cheikhou Kouyate, James Collins, Sam Byram and Gokhan Tore are all out for the visitors, but key men Aaron Cresswell and Michail Antonio should return.

Andy Carroll could lead the line against his former club, having come off the bench against Arsenal last weekend.

Ahead of the game, Klopp backed Loris Karius, following his compatriot’s poor display against Bournemouth:

“He made a mistake which [David] De Gea made a few days before.

“Even the best goalkeepers in the world make mistakes, it’s still possible.

“There’s no perfect recipe for development—but closing your ears helps. I’m quite good at this, hopefully he can adapt to my skills!”

One to Watch: Andy Carroll Carroll endured a miserable Liverpool career, and he will forever be seen as one of the Reds’ worst ever value-for-money signings.

The 27-year-old certainly has quality, though, and his aerial presence can be as unstoppable as any Premier League player on his day.

If he starts against Liverpool, Matip and Dejan Lovren will have to be prepared for a physical day at the office.

Everyone knows about the curse of players coming back to haunt their former clubs, and Carroll will be desperate to prove a point on Sunday.

Liverpool vs. West Ham is being shown live on Sky Sports 1 in the UK, which is available to stream live with a NOW TV day pass.