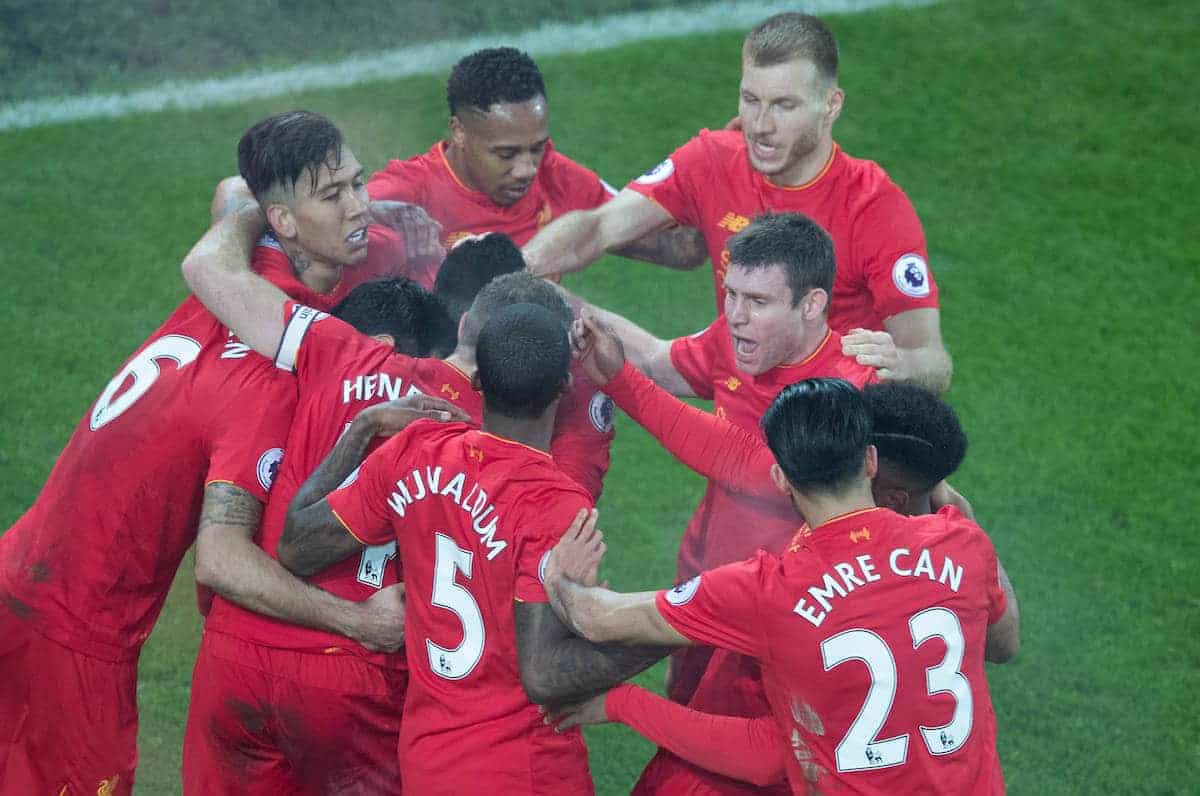 Liverpool produced a gritty but determined performance in their late 1-0 victory over Everton on Monday night.

Shanked a clearance in the first half but the backpass to him was poor.

Was regularly shouting to his defence to offer on outlet, but only had one real save to make which was a routine catch from a Ramiro Funes Mori header.

Involved near the end of one of the first half’s best attacking moves, passing to Divock Origi through traffic in the box when perhaps he could have shot himself.

Most of his crosses found the packed Everton defence, but with Origi and Roberto Firmino regularly dropping deep there was little to aim at.

There are signs that his attacking play is improving.

Carried the ball out from the back in the absence of Joel Matip and while his involvement in buildup play was good, his long passing was less so.

Picked up the first booking of the game when he flattened Romelu Lukaku on the halfway line just as the big Belgian was about to run past him.

Had a few uncertain moments, but formed a good partnership with Ragnar Klavan to help keep Lukaku relatively quiet.

Made several key interventions in defence, blocking a Lukaku shot when the Everton striker looked certain to score, and going in hard but fair in midfield, avoiding the type of two-footed lunge which has led to controversy in recent Premier League matches.

Lukaku has been one of the form strikers in the league this season, but the Estonian dealt with him well, winning almost every battle with his opponent.

Was the source of a lot of the best chances which Liverpool had throughout the game.

He set Firmino up for two good opportunities in the second half after a solid but unspectacular first, while he also used his guile to keep the much faster Enner Valencia at bay in defence.

The statistics will show that he completed just 74 percent of his passes, but the ones he did complete were key.

Struggled at times to cover in front of the back four but was helped by Georginio Wijnaldum on the occasions he couldn’t get across himself.

Deserves an extra point for somehow staying on the pitch after being on the receiving end of a dangerous tackle from Ross Barkley which should have seen the Everton man sent off.

Went on to give as good as he got while staying on the right side of the referee, and it was a good captain’s performance in what was a fiery derby game.

Regularly helped out the defence, and his athleticism was key in this fast-paced derby.

Saw a shot sail miles over the bar in the first half, and though some of his play looked sloppy he came out of the game with a pass accuracy of 96 percent, making him Liverpool’s most accurate passer on the night.

Struggled to get into the game in the first half as much of the action passed him by; while at one point in the second half he performed at least five Cruyff turns one after the other.

Sent a nice ball through to Sadio Mane which almost led to a chance for Origi, but it was a game where he had to do a job for the team, rather than be its leading light as he has been in other matches recently.

Sent the away section into raptures, pouncing to score the winning goal as the ball rebounded off the post following Daniel Sturridge‘s shot.

Before then he had spent much of the game running into trouble and was wayward with his passing on quite a few occasions.

His pace was a threat, as it always is, but with the ball at his feet he struggled to get beyond the Everton defenders.

Played the part of the Everton players’ punching bag in the second half, regularly winning free-kicks for his team.

Like his captain, he did well to carry on following a nasty looking collision. Started the game as the lone forward up front, but regularly swapped with Firmino and also dropped deep to get more involved.

His defensive work was good, and he drew a foul from Barkley towards the end of the first half thanks to a good showing of pace and power.

Had one of the best chances before the break but he shot over and wide under pressure after Clyne’s cross. Started out on the left again but occasionally moved centrally where he looked more like his usual self, helping build the play in the tight, narrow spaces.

While his buildup play in the middle was generally good, his finishing wasn’t.

The Brazilian missed a great chance to score following Milner’s through ball, and dallied moments later when presented with another chance to shoot inside the area.

He went on to force a good save from Everton substitute keeper Joel Robles, with a good effort from Milner’s corner, and could have put the game to bed in the dying minutes, but his slow shot was cleared off the line by Seamus Coleman.

Passed the ball straight out of play on one occasion, but still unfair to mark him down for that after 10 minutes or so of hard work at the end of the game.

Made a good tackle on Lukaku, tracking back as the striker was breaking through the defence.

Had been quiet after coming on but it was his shot, let go after a dart across the edge of the area, which rebounded off the post, allowing Mane to pounce for the winner.

The manager picked the same starting lineup which defeated Middlesbrough 3-0 last time out, but it was more a case of picking who’s available, even though Sturridge and Can returned to the bench.

He used his substitutes well, introducing Can to add some drive and power to the midfield, and Sturridge to try to create something from nothing.

Both of these things happened, and his side managed to get three points from a tricky derby which was low on quality and should probably viewed in isolation from the rest of the season.