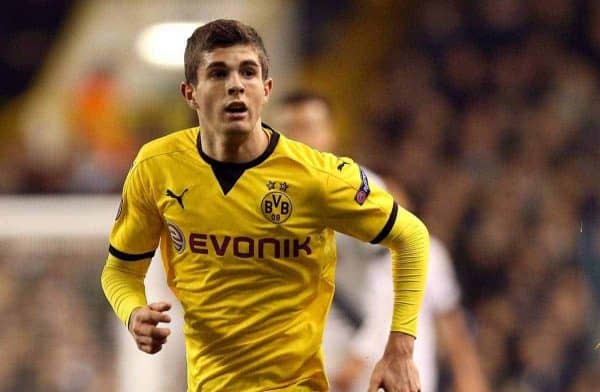 FSG ‘keen on signing a US star’, with Christian Pulisic already on Liverpool’s January radar

John W. Henry and Tom Werner, founders of FSG, have amassed a considerable sporting empire on both sides of the Atlantic, as owners of the Boston Red Sox as well as Liverpool.

So far, in terms of transfers, Henry and Werner have largely remained at arm’s length, allowing the likes of Kenny Dalglish, Brendan Rodgers and Jurgen Klopp to discuss incomings and outgoings with the Reds’ committee.

However, according to a report in German publication Bild, they are said to be eager to sign a player from their homeland of the United States.

This would provide Liverpool with a considerable marketing boon, while in Pulisic, Klopp would be acquiring a young player with vast potential.

Pulisic is already an established first-team player at Dortmund, with Thomas Tuchel naming the 18-year-old in his starting lineup in Wednesday night’s 2-2 draw away to Real Madrid in the Champions League.

Klopp was previously believed to have agreed not to approach his former club in the transfer market, but Pulisic will test his resolve.

Liverpool won’t be the only club weighing up a move, however, with Bild suggesting that “almost all” of Europe’s biggest sides are interested in acquiring the 11-time USMNT international’s services.

But Dortmund are said to be more open to selling Pulisic to the Reds than any other club.

Pulisic would be the first American to play for Liverpool since Zak Whitbread, with Brad Friedel and Hugh Lester the other two US representatives on the first-team books on Merseyside in the club’s history; Brooks Lennon is currently part of the Reds’ under-23 squad.

Clint Dempsey was close to sealing a move to Anfield in 2012, but their offer fell through, with Jordan Henderson rightly refusing to join Fulham as a makeweight.

While Friedel provided some solid performances between the sticks during his three years with the club between 1997 and 2000, Pulisic’s impact would likely more significant.

Able to play in a variety of positions across the forward line, the teenager could relieve Klopp’s attacking problems in January.

Sadio Mane is set to depart for the Africa Cup of Nations on the turn of the year, while Daniel Sturridge, Philippe Coutinho and Danny Ings are all currently sidelined through injury.

FSG are reportedly willing to sanction a big-money signing in the winter window, and Pulisic cannot be ruled out as a priority target.