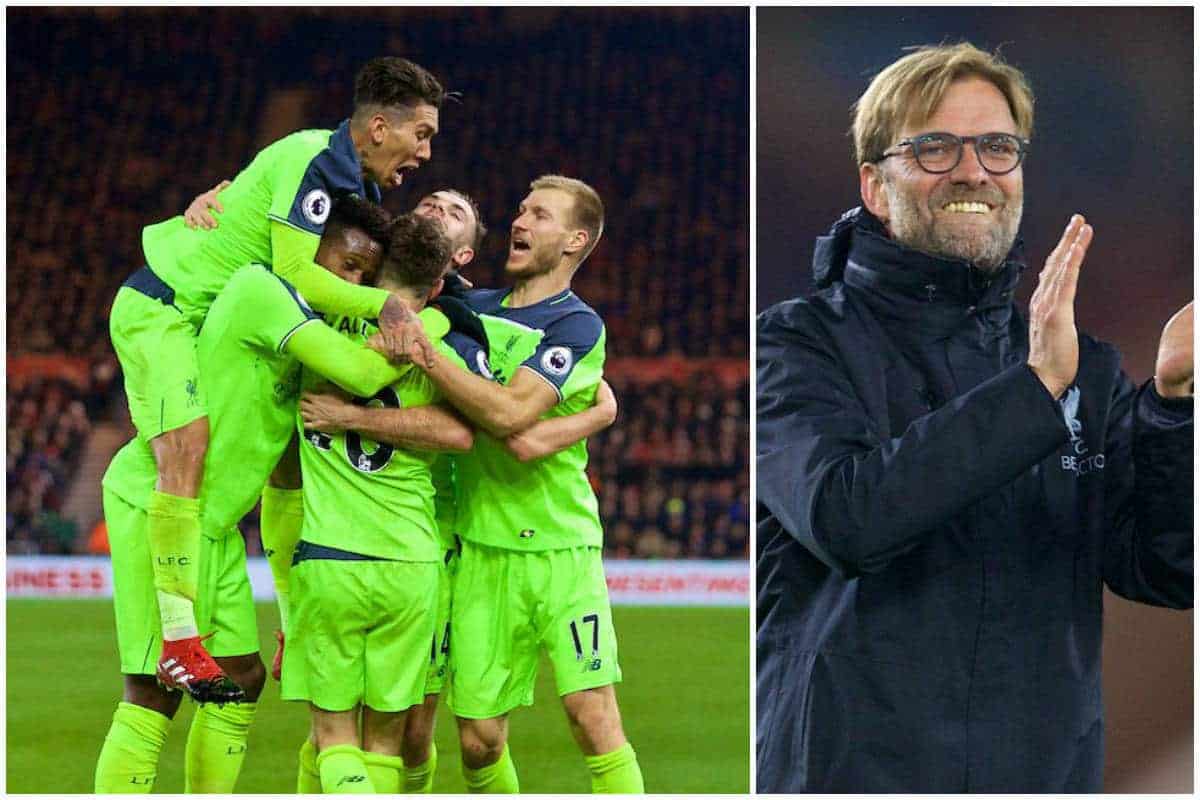 In his press conference prior to the Middlesbrough game, Klopp spoke of the void left by Philippe Coutinho and how his side were working on filling it.

“We have to adapt now,” he said. “We know what we have to work on but that doesn’t mean it works immediately, in the first second.”

When the game arrived their work became evident, but when the teams were announced the prophecies were grim.

A Liverpool defence with a reserve feel would face the speed of Viktor Fischer and Adama Traore, and an attack supposedly not clicking were playing away against a team with by far the best defensive record in the bottom half of the table.

The doubters had every reason to doubt, but by full-time they were turned into believers. Lallana began the first half in a central midfield role on the right, before swapping positions with Georginio Wijnaldum with just over 20 minutes gone.

After this early switch, instigated by the Dutchman, the pair operated as dual attacking midfielders in a formation similar to the one used earlier in the season.

They would drop deep to defend or to receive passes from Jordan Henderson, but during the attacking phase both were in or around the box.

As the game progressed, Wijnaldum dropped into a position as the more obvious second midfielder of three, while Lallana became the most attacking, as his two goals indicated.

The trio clicked, and at one point in the second half Henderson and Lallana swapped roles, naturally restoring the team’s shape rather than running unnecessarily to the positions they were originally assigned.

Wijnaldum and Henderson finished the game with passing success rates of over 90 percent—the pendulums in a midfield which allowed Lallana to tick.

Fluidity in the attacking third was a hallmark of Liverpool’s attacking play this season, but since the injury to Coutinho and the introduction of Divock Origi the movement has been more rigid.

This occurred naturally due to the slight differences in style between Origi and Roberto Firmino as strikers, and also because the latter was re-adapting to the wide role on the left.

This is the adaptation which Klopp spoke of in his pre-match press conference, and will be something they have been working on in training with Zeljko Buvac and Pepijn Lijnders.

Against Bournemouth less than eight percent of Firmino’s touches came in the attacking midfield area, but against Middlesbrough this number was up to 23 percent.

Mane, meanwhile, is usually a direct attacking winger-cum-forward, but he didn’t touch the ball once in the extreme right corner of the pitch, which is unusual for him.

At one point Liverpool had Origi crossing from the left to Firmino coming in from the right to head the ball down for Mane in the centre.

Against Middlesbrough, Liverpool’s work on the training pitch reaped rewards.

As the team warm up before each game, Lijnders will oversee a drill which involves the midfielders, attackers and the full-backs.

They play out attacking situations, rehearsing them mentally as well as physically, passing the ball quickly through midfield and occasionally out to the full backs, who then cross into the box for their onrushing team-mates.

The first goal was practice made perfect in a game situation: Mane played the ball out to Nathaniel Clyne bombing on from right-back, and his cross found Lallana’s run at the far post.

It’s worth noting that Mane’s involvement in this goal was from an attacking central midfield position—exactly the sort of area where you might see Coutinho roaming.

The second goal was an incisive move through the centre of the pitch, and though it began with James Milner on the left, followed by a neat quick pass forward by Henderson, this goal was an example of swift attacking midfield play.

Mane dropped deep into midfield again and, receiving a knock-down from Origi, he burst forward playing one-twos with Clyne and Wijnaldum on the way. The Senegalese then found Lallana who squared to Origi to score from six yards, having made the run forward after his earlier involvement.

Another theme of the game was the running of Lallana. He’s usually praised for the amount of distance he covers and his ceaseless pressing of the opposition, but this game was all about the direction and timing of his runs.

His position on the pitch has already been discussed, but the forward runs he made from these areas were what really stood out.

With the front three causing havoc in front of and around him, the much-improved Englishman was able to take up positions in the pockets of space they created.

His first goal came about when he was able to run from deep, stealing in at the back post to head Clyne’s cross while Origi, Wijnaldum and Firmino occupied defenders in the middle and Mane lurked on the penalty spot.

His finish for his second goal was first class: he coolly side-footed the ball into the corner of the goal with his left for his sixth of the season.

Lallana’s display epitomised an impressive performance in which Liverpool’s goals scored and clean sheet were down to a complete team performance.

Klopp appears to have found a way to adapt without Coutinho, but the next game, against Everton at Goodison Park on Monday night, could be a different test entirely.