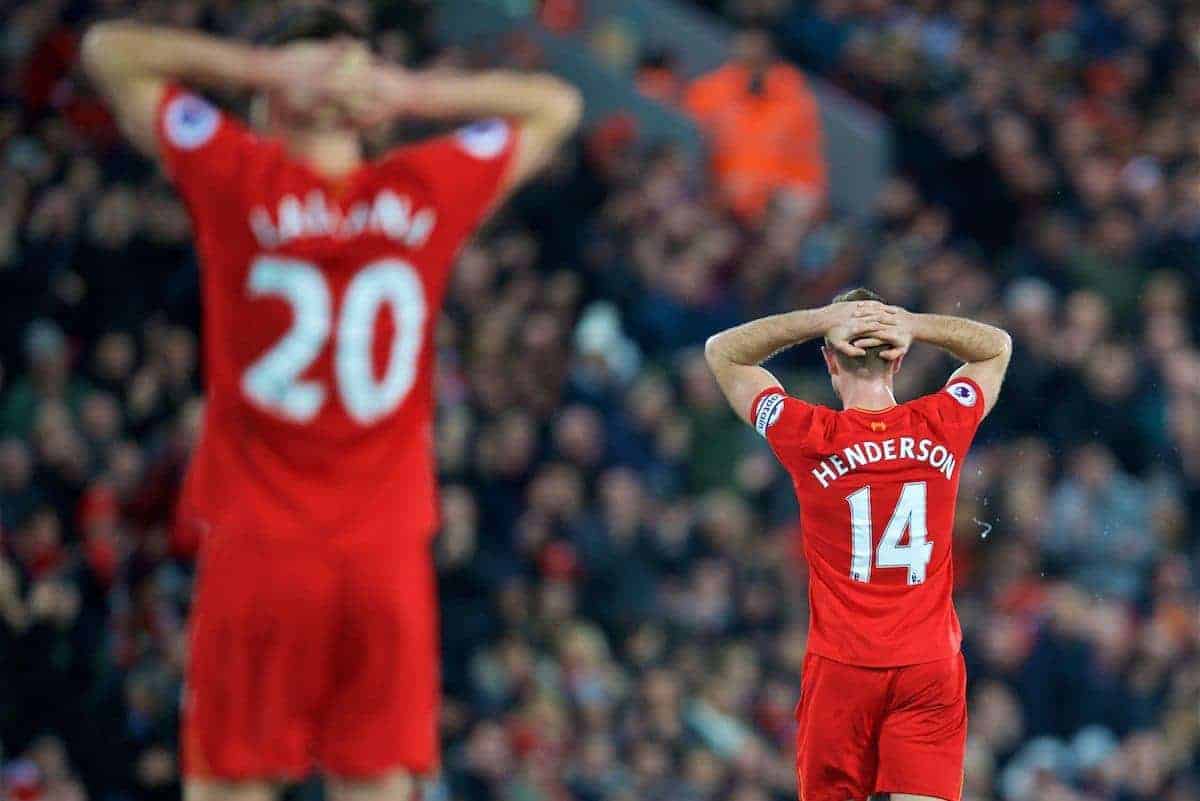 It was two crucial points dropped by Liverpool against West Ham on Sunday, with the majority of the players not performing to the best of their ability.

Having been criticised for his performance last time out against Bournemouth, Karius did little to silence his skeptics.

The 23-year-old simply had to do better for Dimitri Payet’s goal, and there was a nervousness about him that seemed to spread throughout the team.

He should not be written off, but his struggles are worrying. One good late punch was a plus point.

A typical Clyne performance, as seems to be the case almost every week.

The right-back was dependable as ever defensively, and he got forward well to support Sadio Mane down the right.

Better end product is required, though, and some of his crossing was aimless at best. Shot over from a great position.

After such a fantastic start to his Liverpool career, this was Matip’s poorest showing for the Reds. It was still far from bad, however.

The Cameroonian returned to the team but his poor misjudgement allowed Michail Antonio to make it 2-1 to the hosts.

He didn’t let the error affect him though, with class on the ball and some important tackles evident, but his mistake was a costly one.

Another player who was criticised for his showing at Bournemouth, Lovren had a solid afternoon while others around him struggled.

He did misjudge one early ball, however, and was fortunate to see Karius make the save.

Substituted at half-time due to injury.

Like Clyne, this was a typically steady performance by Liverpool’s auxiliary left-back.

The 30-year-old was a constant outlet down the left, but not a huge amount came from his final ball. Far too many crosses didn’t have the right trajectory on them, and his corners were woeful.

The captain has enjoyed an excellent start to the season, but he wasn’t at his top level on a disappointing afternoon.

The Englishman’s range of passing was generally impressive, barring a couple of miscued attempts, and he kept things ticking in the middle of the park.

Denied brilliantly by Darren Randolph from 30 yards out, but like Milner, his corners were poor.

It would be nice to see a little bit more from Wijnaldum, even though he is an aesthetically-pleasing footballer with great intelligence.

Too often against the Hammers, the 26-year-old was happy to take the easy option, and the ruthlessness in the final third that he possessed at Newcastle was nowhere to be seen.

Had several good chances to score but failed to hit the target or hit a clinical shot. Within five minutes of his first start in a month, Lallana had found the net with a lovely finish from close-range.

In truth, the 28-year-old was not at his brilliant best after that, but he always looked a threat and Liverpool are far more fluent with him in the team.

He faded in the latter stages – perhaps to be expected, given his lack of playing time.

It hasn’t been a great run of form for Mane, and he was again a little hit-and-miss at Anfield.

The speedy winger certainly looked dangerous, and found Roberto Firmino with one delightful first-half pass, but his touch was sometimes rusty and he sometimes held onto the ball for long.

Lucky not to be sent-off, having clashed with both Andy Carroll and Aaron Cresswell.

A rare off-day for the Reds’ dazzling Brazilian.

As ever, Firmino did his best to weave his magic in the final third, but he was ineffective on the whole, and struggled to get into the game.

He is not the same player when used in a wide left role, and Jurgen Klopp must be tempted to return him to his preferred central berth. Origi went into the match having scored in his last three games, and he was fairly bright on Sunday.

The Belgian youngster’s pace and strength gave Liverpool something different to Firmino down the middle, and he made it four goals in four, following a close-range finish.

He doesn’t possess Firmino’s guile and work-rate, which at times proved to be frustrating. The Estonian was rarely tested during his 45 minutes on the pitch, but he did make one important block and produced an uncharacteristic Cruyff turn that wowed the Anfield crowd.

With Philippe Coutinho and Emre Can both injured, Klopp’s team selection was essentially made for him.

He could nothing about yet more individual errors costing his team goals, although it was a surprise to see only one substitute used.

This has become something of a recurring theme, and late on it looked as though fresh legs were needed.

A lack of options on the bench is a big difference to a few weeks ago when options were aplenty.