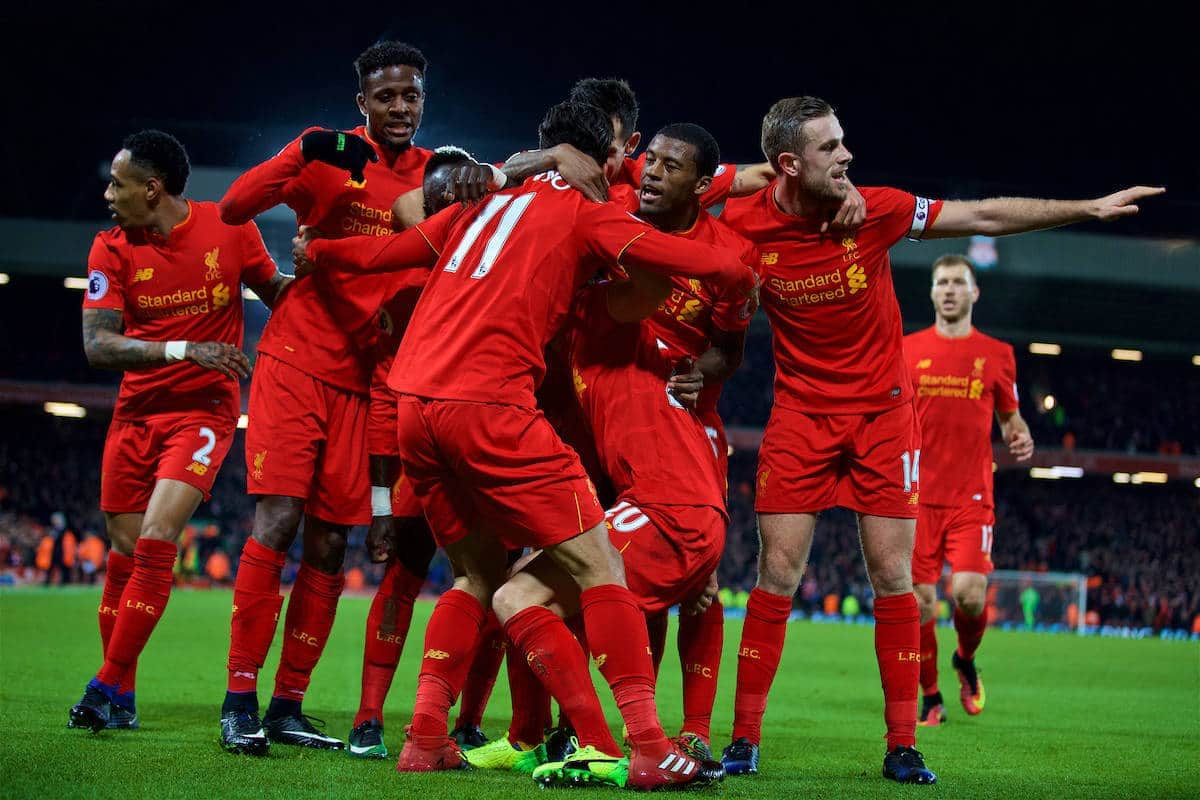 Liverpool came from behind to seal a 4-1 victory over Stoke City on Tuesday night, keeping up their bid for the Premier League title.

After a welcome break for Christmas, Liverpool returned to action at Anfield on Tuesday evening, taking on a Stoke City side firmly established in mid-table.

Jurgen Klopp named an unchanged side once again, with Roberto Firmino keeping his place in the starting lineup despite his arrest for drink-driving on Christmas Eve, while his compatriot, Philippe Coutinho, was among those still out with injury.

Stoke lined up with a clear game plan, with Mark Hughes eschewing the culture and flair of Ibrahim Afellay, Bojan Krkic and Xherdan Shaqiri in favour of a more agricultural approach, naming ex-Reds striker Peter Crouch in attack.

With Chelsea, Manchester City and Arsenal all winning on Boxing Day, Liverpool needed a win to keep up the pace, and after a poor start, they did so in style.

Liverpool started brightly, attacking the Kop, with Divock Origi among those to impress as both Firmino and Jordan Henderson fired early shots on Lee Grant’s goal, but it was Stoke who broke the deadlock.

With the Potters opting to fire high balls in to Crouch, the Englishman played a key role in the buildup as Erik Pieters’ hooked cross was eventually turned in by Jonathan Walters on 13 minutes.

Joe Allen, fired up against his former side, led Stoke’s forward charge throughout, and almost grabbed the second of the night before the 20-minute mark, but Simon Mignolet made a smart stop.

The Reds began to regain control as the half wore on, and it took a last-minute block from Crouch to deny Firmino from close range, as Stoke looked to hold onto their lead.

They were ultimately unable to, however, as an excellent pass from Origi carved open the Stoke defence, with Sadio Mane‘s drilled cross steered in by an onrushing Adam Lallana following a clearance from Glen Johnson.

This wasn’t it, with Liverpool lifted by their equaliser, and Firmino soon put his side ahead with a low, left-footed drive, with Mane going close to a third just before the break. Klopp delayed sending his side out for the second half, with the German utilising the interval to motivate the Reds for a renewed charge—though the tempo of the game stuttered before the hour mark.

It took an injection of impetus from Henderson as the ball broke loose in the final third, with the captain laying the ball into the path of Origi, whose cross was slid past Grant by former FC Porto midfielder Giannelli Imbula.

With the Reds next in action on New Year’s Eve, Klopp made a pair of substitutions with 20 minutes left to play, sending on both Emre Can and Daniel Sturridge.

Sturridge scored within a minute of coming on, capitalising on a misjudged backpass from Ryan Shawcross to round Grant and touch home, netting his first Premier League goal of the season.

This gave Liverpool breathing space, and they were able to push forward against a demoralised Stoke, with another substitute, Alberto Moreno, going close with an acrobatic effort.

They were unable to add a fifth, however, though that should be of little concern after another three points won.